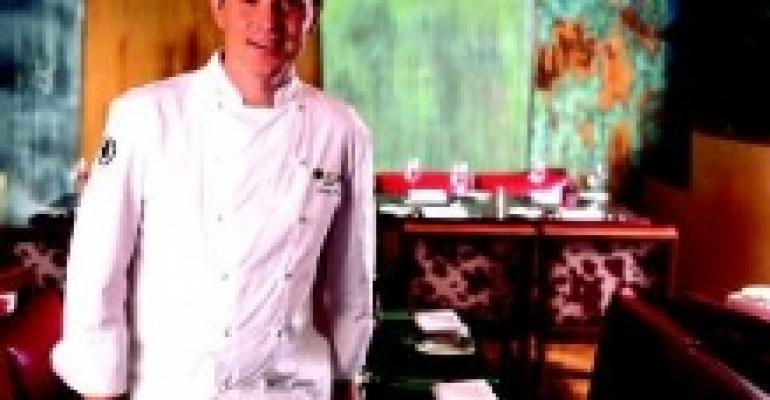 Is there a developing disconnect between what restaurateurs believe they can charge people and what people are willing to pay?

I didn't used to think so. In fact, I've long said that American restaurants have always been very sensitive to the market, keeping prices at a comfort level most people would judge as fairminded. But this has begun to change as a result of increased costs, rising sophistication among consumers, and one other thing: hubris, that wonderful Greek word for arrogance.

I am seeing dinner prices at upscale restaurants rise to unexpected levels, with main courses now heading into the $40-plus range. (In steakhouses, they broke that ceiling years ago, for a sirloin without so much as a potato or vegetable on the plate.) Alain Ducasse NY charges $145 for a three-course meal (albeit with plenty of extras and marshmallows), Joël Robuchon in Las Vegas $345 for his tasting menu, and Masa in New York charges a minimum of $350 to sit at his sushi counter.

And are these places jammed every night? Not by a long shot. My visits to each of these restaurants have evidenced empty tables on every occasion.

Price points are soaring in high-end restaurants. Can this boom last?

But even below this level, prices have skyrocketed to astounding heights. In New York, Stephen Starr's $10 million Buddakan has $47 entrees; At Chicago's highly experimental restaurant Alinea, the menu is $125 for small tastings of 13 courses; At Guy Savoy in Las Vegas, marinated mackerel with a seaweed-lemon granite is $50 and tuna with caviar, green almonds and salad is $90. And a $14 cocktail? Now that's hubris!

Not for a moment do I believe that the price of a dish should be geared to the wholesale price of an ingredient such as, say, breast of chicken or fettuccine. But whenever restaurateurs can get away with charging a small fortune for ingredients like foie gras, caviar or truffles, they always insist it is because those ingredients cost them so much.

I believe that a restaurateur should make an extremely good living based on his talent, service, food, and wine cellar—all of which cost a lot of money these days. Ironically, then, many new restaurants charging the highest prices have denuded their tables of linens, insisting it is a "design statement," when in fact it saves them tens of thousands of dollars per year. Then they stock their wine cellars with $1,500 bottles of wine they will never sell. Hubris.

But I think the real reason prices are soaring is because restaurateurs have let themselves be lured into bigger and bigger projects with higher and higher real estate leases and development costs. As Bobby Flay recently told the New York Times, "It cost us $280,000 to open Mesa Grill [in 1991]. Today, to open that restaurant, it would cost, I don't know, pick a number. Five million? Six million? Seven million? I can guarantee that."

And some cost much, much more, even when the dining room only seats less than 60 people a night. Gordon Ramsay's new restaurant in New York's London Hotel cost between $5-6 million for a 45-seat dining room and a casual 95-seat cafè. Thomas Keller's Per Se cost at least $15 million and seats only about 65 people, once at lunch, once at dinner. And while things are always more expensive in New York, Los Angeles and Las Vegas, prices are inflating everywhere.

Which is why so many of the new high-end restaurants are either bankrolled by hotels or casinos, with chefs merely signing on to management contracts,occasionally—but only occasionally—with a cut of the profits, if there are any.

The irony is that many big name chefs—Charlie Palmer, Tom Colicchio, Laurent Tourondel, David Burke and others—are not even bothering to open fine dining restaurants any more; instead they open yet another steakhouse, one more posh than the next, hawking Kobe-style burgers and filets for twice the price of an already exorbitant porterhouse.

Are consumers buying into all this? On expense account, yes. On a social occasion, sometimes. But the question I get more than any other from my friends and readers is, "How expensive is this place you recommend?" Recently a wellheeled couple I know asked me about celebrating their son's birthday at Buddakan. I said it's far from the most expensive of New York's top restaurants, but depending what you order, the bill can add up.

They went, they dined well, and then they went into sticker shock when the check arrived. "It was good, but we wouldn't go back," my friend said, "not at those prices."—John Mariani