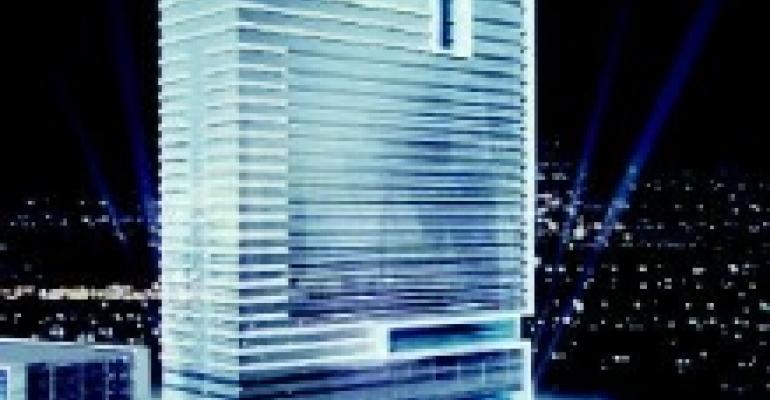 Meet Me At The Palmer

Could a chef really swing that? Ask Charlie Palmer, whose name will soon be emblazoned atop the 35-story Charlie Palmer Hotel, a nongaming boutique property that will be located at the corner of Tropicana Avenue and Dean Martin Drive, one block west of the Las Vegas Strip. The project will have a $400 million development cost and should open its doors sometime in 2008.

It's not Palmer's first foray into the hotel market. He's also involved with the Hotel Healdsburg in Sonoma, CA, in addition to operating his Dry Creek Kitchen restaurant there. But that one is a 55-room affair. He'll be playing in the big leagues of real estate with his new tower in Las Vegas. He and development partner Marvin Lipschultz are kicking in $47 million in equity to get the project started. Charlie, what are you thinking?

"As the city has become known for world-class restaurants, clubs, spas and entertainment, demand for luxury accommodations has grown equally," Palmer says. "The Charlie Palmer Hotel will surpass these expectations."

No argument here. But how and why did you decide to make the leap from hired hand to ownership?

"For the last 10 years, I've been a player in the development of Las Vegas," he told website Forbes.com. "Real-estate developers and hoteliers have come to me to enhance their properties with a great restaurant that will increase visibility and values. Developers have said to me that what I provide will help them bring in "X" dollars more per square foot. At some point, we need to be the developer."

There will be no less than three Charlie Palmer restaurants at the Charlie Palmer Hotel, one of them the first Charlie Palmer sushi bar. But that's just the beginning. The property will offer 400 condominium/hotel "residences" that include a mix of studios, one-bedroom and penthouse units. It will feature an event venue, a nightclub, a cigar bar and, the latest must-have Las Vegas fixture, a rooftop "sky lounge." Other amenities: a full-service spa, a hair salon, a gym and a sleek pool area. Noted restaurant designer Adam Tihany, who has designed each of Palmer's Aureole restaurants, will handle all the interior design for the hotel. Palmer has quietly built an 11-restaurant empire that stretches from coast to coast. But it's fair to ask about the risk factor he's facing here. For one thing, the media are full of stories about a real estate bubble, and Las Vegas has been one of the leaders of ballooning real estate prices over the past couple of years. Who's going to buy all these condos?

"Everything we look at that is real and being built is completely sold out," Palmer says. "If you can sell at the right price, you can build it." He said he expects prices to start at roughly $1,000 per square foot. In fact, you can put down this magazine and go to www.charliepalmerhotel.com and make a "soft deposit" on a unit right now.

A second factor is that he already operates other Charlie Palmer restaurants elsewhere on the Las Vegas Strip: Charlie Palmer Steak and Aureole. He says that the owners of the properties in which those restaurants are located, MGM Grand and the Four Seasons, are OK with his new project.

One thing's for sure. No chef has ever had his name plastered on a building in the size and proportion Palmer will at his new hotel. The previous leader was French legend Paul Bocuse, whose name tops his restaurant in Lyon. Hey, even Donald Trump will be envious of the play Charlie Palmer will get out of this venture.