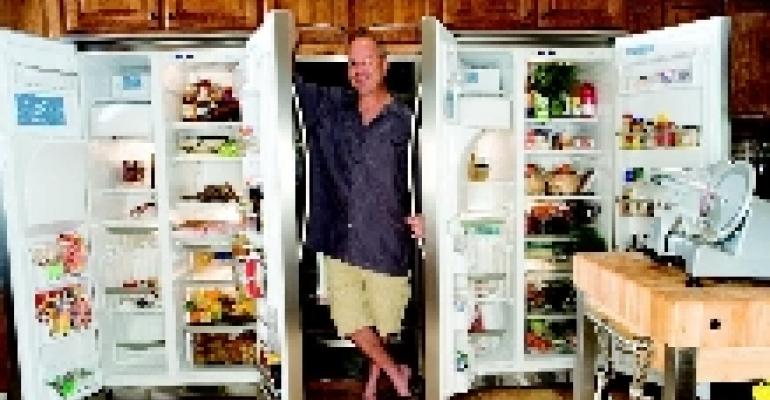 When it comes to getting to, and staying atop, the dynamic South Florida culinary scene, no one has ever done it better than Mark Militello. He opened his first restaurant, the eponymous Mark's Place in North Miami Beach, in 1988, and the national honors began to roll in almost immediately, culminating-with the James Beard Foundation Best Regional Chef: Southeast award in 1992. Today he serves his personal interpretation of contemporary American cuisine at four locations: Mark's Las Olas in Fort Lauderdale, Mark's Mizner Park in Boca Raton, Mark's South Beach at the Hotel Nash on Miami Beach and Mark's City Place in West Palm Beach.

Wow, this is some setup.
We've just remodeled. So the kitchen's brand new, but we've lived in the house for 15 years.

You really went for extra storage space this time around.
Not really. This place had two refrigerators when we moved in. We just replaced the old ones with new ones for the remodel.

The previous owners must have really liked to stock up.
We always wondered why they had two refrigerators. It turns out they kept kosher.

Looks like lyou need both units
There's a method to the madness. We have his and her refrigerators.

Which is which?
All the healthy stuff is in my wife Christine's fridge, at your right. The one with the fish, beer and chocolate? That's mine.

Looks like snapper is on the menu here tonight.
Actually, it's lobster tonight. The snapper is for tomorrow.

Where do the nasturtiums fit in?
These came from the guy who grows all our baby lettuces for the restaurants. I make a compound butter with the nasturtiums and throw it on pasta.

Sounds tasty. Who usually cooks?
My wife. Our schedule is different from that of most other restaurant families.

So your big meal is in the middle of the day?
Yes, like the Europeans. Then my wife makes dinner for our two daughters at night.

And then you all eat chocolate?
We could. This box is from DC Duby Wild Sweets in Vancouver, BC. They're like the rocket scientists of chocolate.

Does this slicer get much use?
It's starting to. It was a birthday present for my wife.

How did she like it?
Well, she was mad. She was expecting a bling-bling gift.

Uh-oh.
I brought it home two days ago after a trip to Spain. She's starting to bond with it now.

If she doesn't, maybe a his and hers slicers approach could work.