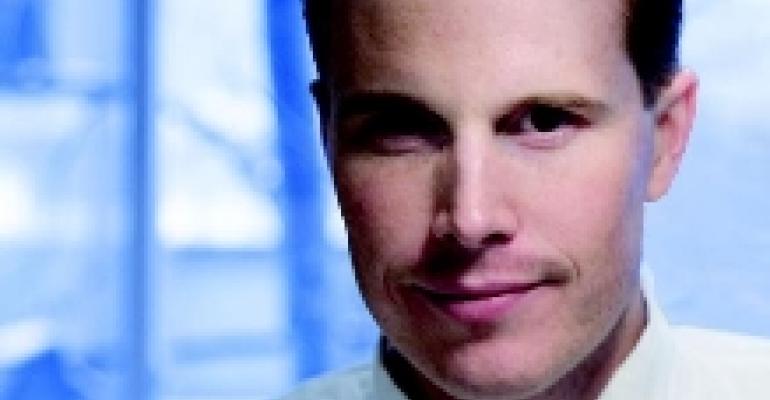 The marketing guys who came up with the slogan "indescribably delicious" for Peter Paul Mounds candy bars back in the 1950s weren't just clever, but prescient.Their phrase remains useful today, particularly for patrons of Grant Achatz's new Alinea (say uh-lin-ee-uh) in Chicago. Dinner there means working your way through an 8-, 12- or 28-course tasting menu where each dish offers a startling combination of texture, temperature and taste, while bearing little resemblance to anything you've ever eaten before. Critics and foodies, skeptics and sycophants: Just about everyone's at a loss for words after an evening at Alinea. Except to say they found it indescribable. And delicious.

Which is pretty much how Achatz (rhymes with jackets) planned it. The 31-year-old chef very publicly set out to create "a restaurant that will push the very definition of what a restaurant is." He took a six-month break from hands-on restaurant work—he'd been chef at Trio in Evanston, IL, a stint during which he picked up the 2003 James Beard Award Rising Star Chef award—to focus completely on his new place.

Achatz had luxuries most chefs only dream about: a test kitchen, a kitchen staff and, because he wasn't busy cranking out dinners nightly in a busy restaurant, plenty of time and energy to focus on his dream operation.

He also had a keen marketing sense. During Alinea's six-month-long development phase, Achatz chose to share many details about the place via a dedicated forum on food web site www.egullet.com. The world was in on his food experiments, the restaurant's business plan and many other aspects that played out as momentum built toward the restaurant's opening last May. There was plenty of back-and-forth with forum participants that revealed how this chef's mind worked. The lesson was that Achatz is a seriously deep thinker about food creation and restaurant operations.

One thing's for sure. Merely by sharing his thoughts this way, no restaurant has ever had a bigger pre-opening buzz, for less money, than Achatz's Alinea did. The 65-seat restaurant opened on a huge wave of hype. So did the place live up to it?

Let's put it this way. If redefining the restaurant means giving people a dining experience they haven't had before, Alinea is a stunning success.

The restaurant is located in a just-off-downtown neighborhood of Chicago, the same one that's home to Charlie Trotter's (where Achatz once worked). Guests arrive at a nondescript gray-brick building and are seated in a bilevel dining room that features clean design lines, a modern feel and an occasional peek of Achatz and his team at work in the kitchen. Nice, but you could get the same effect at any big-league restaurant.

Then comes the food. By design, Alinea's menu doesn't give out much information about individual courses. Guests know each dish's primary ingredient and what its garnish will be (e.g., "Bison, with persimmon, cranberry, juniper aroma"). But what hits the table is a succession of dishes that don't look like anything you've seen before, or have even imagined; that don't look like they contain the ingredients they're supposed to (although they do); and that look like they are going to require a bit of explanation from the waiter just so you can figure out how to eat them.

You'll need guidance, because this isn't food that comes on a plate and is necessarily eaten with knife and fork. Presentation is as unique as substance at Alinea and, mostly, the food comes out on customdesigned serving pieces.

As much as patrons rave about the virtuoso-level food, the serving pieces also stick in their minds. How did Achatz come up with this stuff?

"I contacted over 30 designers via email explaining my desire to produce service pieces based on function as the priority as opposed to aesthetics," Achatz says. "Pieces would be built around the food, supporting the dish based on its characteristics. Of the 30 designers I contacted, only one replied: Martin Kastner of Crucial Detail." Their resulting collaboration resulted in the many unusual serving pieces used at Alinea.

Note that we're not saying that one or two courses consist of wildly inventive food presented in an imaginative manner. Every single course does.

So how does this all work as a business proposition? It's been tough to get a table so far. Chicago has enough high-rollers with adventurous taste buds to ensure a steady flow of patrons.

Reviews of the place tend to be laudatory, although most critics are so far out of their comfort zone that they stop short of an all-out rave. After dubbing the experience "Pure magic," Chicago Sun-Times critic Pat Bruno filed this disclaimer to an otherwise rhapsodic review. "Either you have a desire to experience this supremely inventive and craftily creative approach to food or you don't. My experience was one of awe mixed with admiration... tempered, however, by the thought that it would be a long time before I could muster up the courage or desire to eat here again."

So has Achatz redefined the restaurant experience at Alinea? We say: Go there and decide for yourself. But give him this: He has redefined the concept of the chef-driven restaurant.

Many restaurant operators say that success in the restaurant business ultimately accrues to those who offer something the other guy doesn't have. If that's true, Achatz is in for a long run at Alinea.