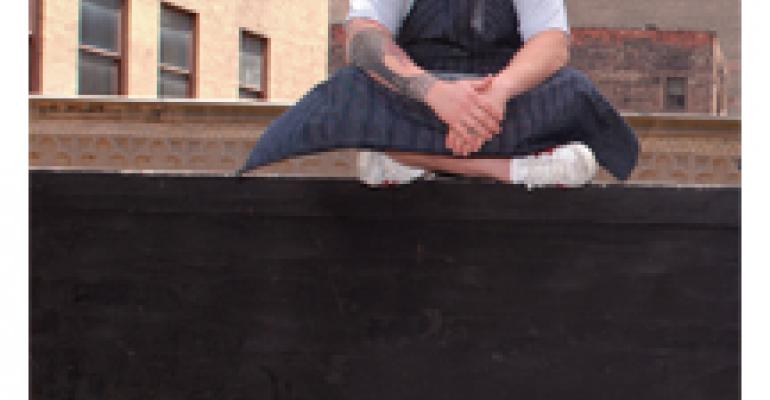 If you're looking for a restaurant that can serve as a template for the times, consider chef/owner Jonathon Sawyer's new Greenhouse Tavern in Cleveland. He's offering customers all the key elements thought to matter in a contemporary dining experience. Both his building and his business are eco-friendly, his food's seasonal and local and his restaurant's low-key approach to polished casual dining offers a welcoming vibe. Throw in affordable pricing and this guy's not just embracing the hottest trends in the restaurant business; he's helping to define them.

Never heard of Sawyer? Get ready, because this effervescent 29-year-old is poised for a national breakout. He learned to cook while bouncing back and forth between Cleveland and New York — but what bouncing it was.

Here's how Sawyer described his vision for Greenhouse Tavern preconstruction: “We are guided by two principles: the idea that the proximity of the farm and soil to a restaurant correlates to the quality of its food and that environmentally conscious or green business practices are fundamental. We will serve food inspired by classic recipes interpreted with local ingredients in a casual atmosphere at approachable prices.”

And he's doing it right in the middle of Cleveland's booming East Fourth Street restaurant/entertainment district. Sawyer's next door neighbor on one side is the sprawling House of Blues complex, Symon's Lola is just a couple of doors down, and 12 additional restaurants, half a dozen bars and a couple of concert venues line a street that's just 450 feet long.

In the midst of this sea of neon and glitz, packed with lunch-seeking office workers mid-day and pro sport fans and concertgoers at night, sits the four-level Greenhouse Tavern, Ohio's first green certified restaurant. The kitchen's in the basement, a staircase in the main floor dining room leads up to additional seating on the mezzanine and Sawyer and Co. will soon build a large working greenhouse on the roof, using it as a source of fresh herbs and vegetables for the restaurant.

The menu (printed on recycled paper, of course), is unpretentious, barely hinting at the quality of each item's carefully sourced ingredients or the polished skills of the people who will prepare it.

It offers six “Firsts” (house-made fromage blanc with thyme and grilled bread, $5); and seven “Seconds” that range from the seemingly mundane (crispy chicken wings with jalapeno, scallions and garlic, $11) to the high-end (foie gras steamed clams, $13). The six-item “Thirds” lineup gives customers the choice of something as simple as an Ohio Beef Burger ($14) or Steak Frites ($19), or as involved as spring pasta with pork rillette, poached egg, porcini and french horn mushrooms ($21).

A five-item dessert list and admirable lineup of by-the-glass wines, half and full bottles, craft beers and affordable cocktails (martinis are $8) help ensure that customers can get anything they want, whether they be hard-core foodies looking for a meal from an up-and-coming chef or sports fans looking for something reasonably priced and familiar. It's part of the genius of the Greenhouse Tavern that both groups will go away satisfied and impressed.