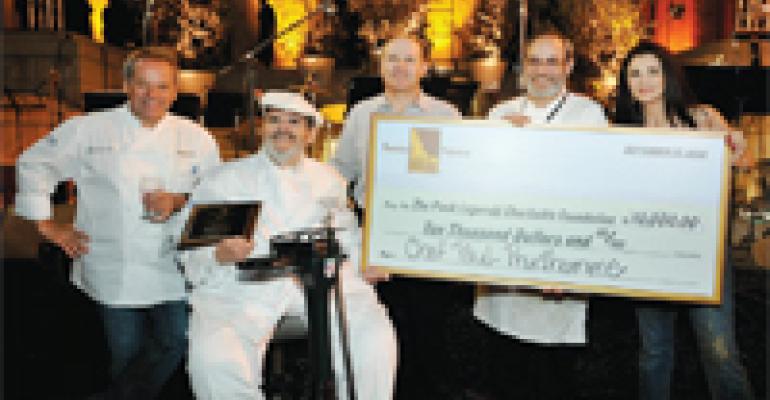 In L.A., the Stars Come Out for Spuds

Other than TV show Iron Chef America, the acknowledged masters of American cooking usually stay away from the competitive cooking scene. But they're willing to step up when a worthy charity is involved, and that's what convinced chefs such as Paul Prudhomme, Michael Mina, Lydia Shire and Nancy Silverton to do battle last month at the American Wine & Food Festival in Los Angeles.

Wolfgang Puck and Barbara Lazaroff founded this event, which this year drew a crowd of 2,500. Attendees were able to watch as these culinary celebrities competed for the grand prize of a $10,000 donation, made in the winner's name, to Meals on Wheels. The contest, now in its second year, was cosponsored by the Puck-Lazaroff Charitable Foundation and the Idaho Potato Commission (IPC).

The winner? Living legend Paul Prudhomme of K-Paul's in New Orleans. He came up with a Cajun-style dish he dubbed Full Boat Idaho Potato Pirogue with White Cheese Sauce.

Said Frank Muir, IPC president/c.e.o., “Last year's contest set the bar pretty high, and we had big expectations for the quality of recipes we'd be tasting. They definitely did not disappoint.”

The bar was indeed set high by 2007 winner, Nobu Matsuhisa, who beat out Joachim Splichal and Julian Serrano by creating the sushi-esque “Idaho Roll.”