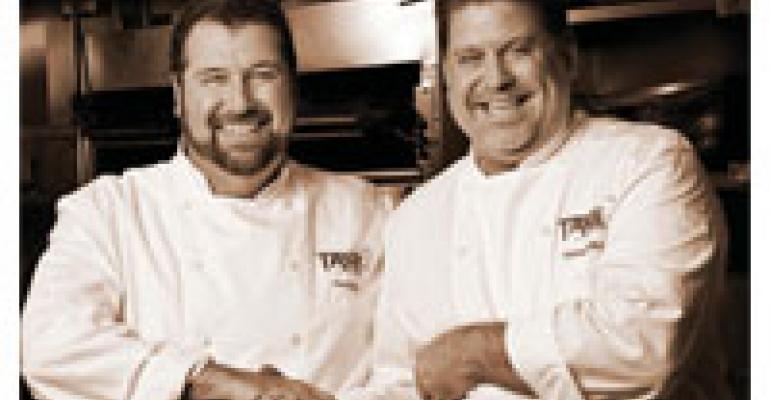 Getting a Grip on Gastropubs

For a veteran chef, it's gratifying when a person who started out with them returns to the fold. It's even better when the returnee is coming off cooking gigs at Wolfgang Puck's Spago, Joachim Splichal's Patina and Heston Blumenthal's iconic Fat Duck in Bray, England. People with this kind of experience just don't hit the job market that often.

And it works out perfectly if you're Allen Susser, and you happen to be looking for someone to handle your new gastropub concept. The result is the powerhouse kitchen team at a restaurant called Taste, where Susser, in the role of consulting chef, and his executive chef, Jamie DeRosa, have been turning out sophisticated comfort food since opening day in early April.

It's a big move for original Mango Gang member Susser, whose long-running Chef Allen's Seafood Grill in the condo-and-retail enclave of Aventura, FL, has been going strong for 24 years. Taste is located 40 miles up Florida's east coast from Aventura, in Palm Beach County's laid-back and artsy Delray Beach. The new place provides a different style of food, a more accessible price point and a vibe unlike the fine dining atmosphere at Chef Allen's.

Susser isn't the first high-profile chef to open a gastropub concept, nor is the genre underrepresented in Palm Beach County. Does he feel like he's a little late to the party?

“That's the funny thing,” he tells the Broward-Palm Beach New Times. “This is two years in the planning, and there was no gastropub anywhere here when I was looking around. Now I'm opening, and I'm shocked as to how many have just popped up. I just hope they can all bring justice to the name and be honest with the food as it should be. As long as they're doing that, who cares how many there are?”

Gastropub proliferation is yet another reason Susser is happy to have DeRosa on board as executive chef. DeRosa first worked under Susser back in 1995, just after chef Allen had picked up his James Beard Best Chef Award — Southeast in 1994. Since then DeRosa has spent his career working in some of the best kitchens in Los Angeles and abroad (the Fat Duck was named the world's best restaurant five years running), most recently serving as opening chef at fine-dining spot Domus in Beijing.

So what did this talented pair come up with when they dove into the gastropub segment? A lengthy menu provides plenty of options for the customers who fill the 125 seats in the restaurant's three distinct dining/drinking areas.

The bar snacks ($5-$6) menu sticks mainly to gastropub standards, although the chorizo-stuffed piquillo peppers with melted sheep's milk cheese gives diners a hint of the creativity to be found elsewhere on the menu. The charcuterie platters ($7-$15) and raw bar fare ($6-$9) are tasty, too.

It's the small and medium plates section ($5-$15) where Susser and DeRosa show their stuff. For example, the jerk chicken wing lollipops ($8) come with a sweet and spicy fresh mango barbecue sauce, and the Florida rock shrimp ($10) is accented with peanut brittle, chilies, soy-lime sauce and coriander.

Large plates options ($16-$22) take fewer chances, although customers who want to eat heavy can opt for the “daily braise” served in half ($12-$14) and full ($20-$24) portions. Rotating options include Julia Child's savory beef bourguignon, 72-hour sous vide short ribs, coq au vin in a Riesling sauce and curried lamb shank. It's a smart format in which to offer this particular style of hearty, slow-cooked food.

Gastropubs are designed to make a lot of money off the beverage component, and this one's no different. But Susser also wants customers to drop some bucks on desserts ($3-$7), offering a particularly strong lineup. One highlight is the “Candy Bar” selection of house-made retro chocolates, including mini Milky Ways, Almond Joys and Snickers. They go for $3 apiece. Other options include a red velvet cupcake with cream cheese icing ($4), coconut chocolate bread pudding ($5), a signature chocolate chip cookie plate ($6) and a Hot Lips organic soda float that incorporates a fresh fruit puree of the day ($6).

Susser and DeRosa are setting a high standard for this segment, and their business savvy is on the money, too. “I set out to create a uniquely American neighborhood pub, where the pure taste of farm fresh ingredients comes through,” Susser says. “It's a place where you are always welcome, and can happily enjoy a cocktail, wine or beer by the waterfall, indulge in a light snack, a tasty meal or a tempting sweet, knowing there will always be something you love on the menu.”

Is this a good strategy for the current restaurant environment? We'd like to hear from anyone who has a better one.