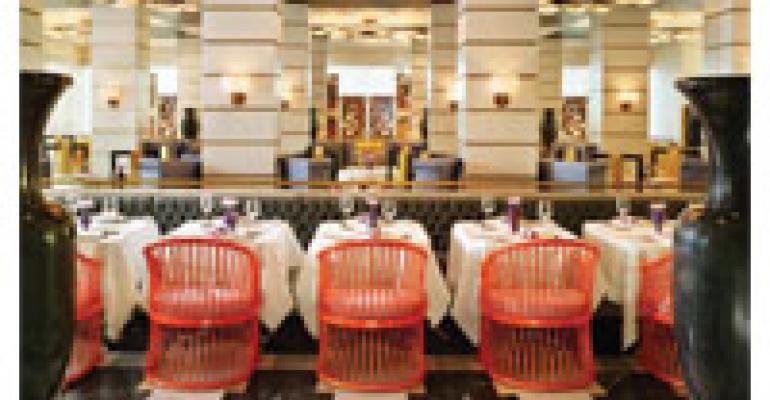 Fixing It On The Fly

If you're ever wondering just how large a role a restaurant's location plays in its ultimate success, give Michael Psilakis and Donatella Arpaia a call. They can tell you about their experience at the Viceroy Hotel in downtown Miami. That's where, just a year after opening their fine-dining spot Eos, the Michelin-starred chef and his high-profile restaurateur partner find themselves pumping out $15 lunch specials — one free beer included — while promising to get customers in and out in an hour, max.

The lesson here: Even if you get everything right — the food, the design, the service — the local economy can make it come out wrong. But give Psilakis and Arpaia credit. They're huge restaurant industry stars in their hometown of New York City. But they weren't too proud to switch gears in a hurry when they found themselves in a tough situation in Miami.

When Eos opened in April 2009, everyone agreed the place was a stunner.

How could this place miss? Eos's location was, on paper, perfect. It's on the 15th floor of the Viceroy, a 50-story condo hotel that's one part of a three-building complex. Immediately adjacent are Icon Brickell 1 and 2, twin 60-story luxury condo towers. Residents of the 1,800-unit Icon project alone would have been enough to fill the restaurant on many days. Multiple big condo developments were nearby.

But developers couldn't sell this many luxury units. Foreclosures ensued. If you're wondering who got stuck holding the bag when the real estate bubble burst, downtown Miami is the place to look.

Psilakis and Arpaia figured the situation out fast. They still operate Eos, but only for dinner. This July, they launched Bistro e in the same space. This new restaurant-within-a-restaurant is a casual breakfast-lunch spot meant to draw workers from the downtown office buildings nearby.

The dining room still looks the same, but there's a different vibe during the day when it's in bistro mode. The waitstaff sports Chuck Taylor Converse sneakers, designer T shirts and biker chain wallets that hold their order pads. The idea is to create a rock-and-roll feel, Psilakis says, something that's tough to pull off in a dining room as snazzy as this one.

But the focus is on the “e3 daily,” three items served bento-box style for $15 that come with a complimentary pint of beer. There's one option each day. Saturday, for example, offers “blood-e-mary” ceviche, mussels salsa verde and key lime pie.

This “$15 on 15th” deal comes complete with a time-of-service guarantee. Servers place a sand-filled hourglass on arriving tables. It takes 60 minutes to drain, reassuring guests that the staff will get them back to the office on time.

At night, the restaurant morphs back to Eos mode and its 53-item menu of mostly small plates. Most items are in the $12-$14 range, a rare chance to eat Michelin-caliber food at a popular price.

It's a good thing Psilakis and Arpaia rolled with the punches on this one. The downtown Miami area is making a comeback now. Renters have begun to fill many of the condos, creating a ready market for restaurants like Eos and Bistro e. If their restaurant bounces back all the way, Psilakis and Arpaia will not only be world-class operators; they'll be known as world-class business strategists, too.