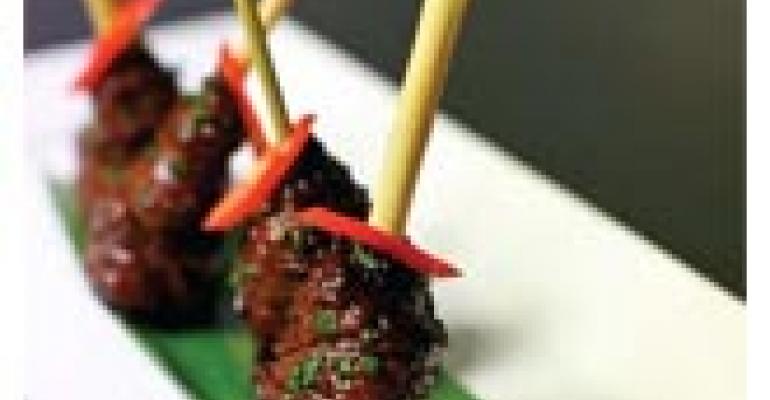 If you've forgotten how much fun it was to run a restaurant before the real estate bubble burst, Wall Street blew up and the resulting recession sucked much of the life out of the business, we've got a way to lift your spirits. Just head to Chicago and pay a visit to Sunda, a perpetually packed pan-Asian restaurant that opened in March in the city's downtown River North district. You won't find penny-pinching customers in search of cut-rate meals or buy-one-get-one deals here. Instead, it's just like the old days, if it's not premature to categorize 2007 that way: big crowds of well-dressed patrons spending money like crazy.

Sunda is the brainchild of the three partners in the Rockit Ranch group: Billy Dec, Brad Young and Arturo Gomez. Their background operating trendy nightclubs and casual restaurant Rockit Bar & Grill gave them expertise in attracting huge crowds and keeping them happy with good food and drink. But they took a step up with Sunda, a 200-plus seat restaurant with a lavish interior (by designer Tony Chi), and a high-profile chef (Rodelio Aglibot, late of the much-celebrated Koi in Los Angeles) and a wide-ranging menu (progressive interpretations of traditional dishes from Japan, China and other Southeast Asian ports of call plus lots of sushi).

Dec and Co. took their time getting the elements just right. The idea was to create a culinary destination unlike that of any other Asian operation in Chicago — a tall order in this restaurant-rich town. “Two years ago our team began traveling to Asia for research while working with Rodelio to develop a concept that has a great story behind it,” Dec says.

This would be plenty for most restaurants, but it's less than half of what's available at Sunda. The rest is sushi — 61 items worth. A lengthy list of specialty cocktails, sake, wine and beer round out the menu.

It's a lot for a patron to take in. But imagine the skill it takes to run a kitchen that has to cook to this vast menu at a restaurant that is crazy busy. It's fortuitous that Aglibot's background includes stints at his self-owned Yi Cuisine (named one of the country's best new Asian restaurants by Food & Wine). He's the ideal man for the job.

So is Dec and the rest of the Rockit Ranch crew. Their experience in the nightclub business taught them how to channel the inner desires of their youthful Chicago customer base, and that's what is helping Sunda be so popular. Early reviewers, in fact, think it's a little too popular, even though they find much to praise about the food. Chicago Tribune critic Phil Vettel gave Sunda three stars, even though he couldn't score a seat the first time he tried to get in. “The next two times I called ahead, and the available reservations were 5:30 or 10 p.m. — nothing in between,” he wrote. “So I can't tell you who inhabits this place at 8 p.m.”

Face it. A restaurant can't get a better review than this right now. When was the last time you heard a critic complain about how busy a big, relatively expensive restaurant was? It's a criticism every restaurant operator would love to hear these days.