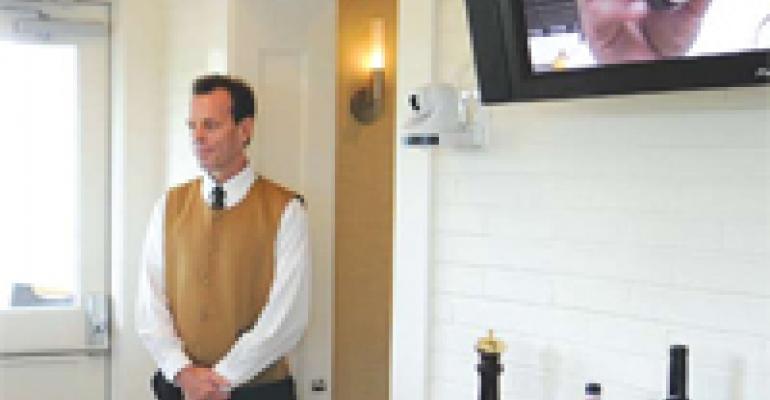 We're not sure he needed one, but Dean Corbett came up with a dandy gimmick for his new Corbett's — An American Place restaurant in Louisville. Thanks to a network of strategically positioned microphones, cameras and flat screen TVs, guests seated in his Chef's Tasting Room are able to interact with Corbett and his kitchen crew as they prepare each element of a nine-course tasting menu. When the meal is complete, departing customers can buy a DVD of the whole works to replay at home.

The result: Guests receive a singular dining experience that comes with a uniquely personal memento. It's a genius idea in the Food Network era, but Corbett's fellow restaurateurs will be interested in other aspects of his restaurant besides the high-tech wizardry that keeps the Chef's Tasting Room so busy.

For one, it's surprising that Corbett, a chef/restaurateur of long standing in Louisville, opened another fine-dining restaurant. He and his late father opened their first one, the DiRona-winning Equus, back in 1985. Corbett is also the proprietor of Jack's, a martini bar/casual dining venture that's adjacent to Equus. He still owns and runs both operations, which are located in the city's St. Matthews shopping area.

You don't see many chef/restaurateurs who dial it down from fine dining to casual dining turn around and open another fine dining spot. But that's what Corbett has done here, choosing a location in the Brownsboro Crossing area much further east of downtown Louisville. What's he doing way out there, where his immediate neighbors are an unlikely mix of luxury homes, big box retailers and the Norton Healthcare medical complex?

Short answer: It's where his customers are. “Eighty percent of our demographic lives out here,” he told a Louisville business paper. “It's remarkable how much of our client base has migrated to this end of town,” noting that there are 100,000 homes within five miles of his place, and that their average annual income tops $110,000.

This is how chain restaurants think when they pick an expansion site. But chains wind up in a strip mall or an end cap unit of a lifestyle center. Corbett went another direction, buying a 150-year-old farmhouse that sat on a two-acre parcel within Brownsboro Crossing. His $2 million investment resulted in a dream kitchen (1,800 square feet), a dining area that seats 120 guests on two levels, and a 60-seat patio so artfully screened patrons don't know they're sitting within hailing distance of Costco.

It's a commitment of money and energy you don't see many individuals make to a new fine-dining operation these days unless it's connected to a hotel. Corbett thinks he and his backers can pull in $5 million a year from the place.

All of which makes Corbett seem like quite a gambler. But his deep connections in Louisville make his new restaurant a solid bet. In addition to his long history at Equus and Jack's, Corbett keeps a high profile through a gig as host of the 30-minute weekly TV show, “Secrets of Louisville Chefs,” shot before a live studio audience in the kitchen theater at Sullivan University.

Still, a convenient location and all the high-tech gadgetry in the world won't keep customers coming back unless the food's really good. That goes double when some entrees are approach the $50 range (Sonoma Veal with smoked sweet potato, chestnuts and truffled jus goes for $48; Prime Filet costs $49).

Not a problem for the 46-year-old Corbett. “We hope to show our guests a new level of elegance and flavor with state-of-the-art technology and creative cuisine,” he says. Mission accomplished.