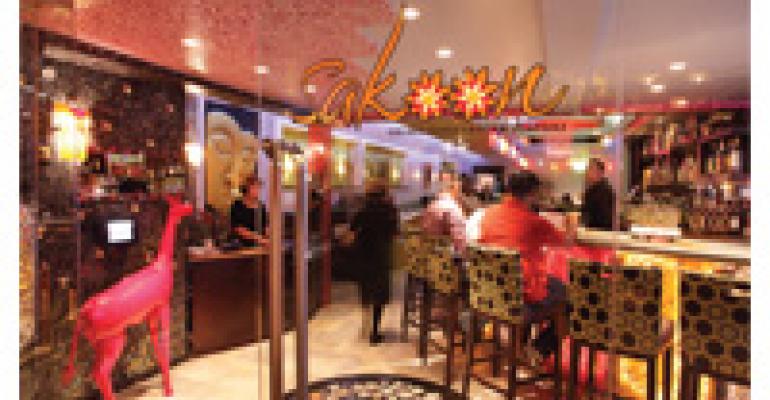 Trendwatchers have predicted for years that Indian cuisine would be the next ethnic food to explode onto the U.S. foodservice scene, but it hasn't happened yet. Other than for a few adventurous foodies, its popularity has been limited to the handful of U.S. cities that are home to strong Indian communities. It's an unfortunate disconnect; this is one of the world's great cuisines, and all it needs to catch on big in the U.S. is a sharp operator who can present it in a format the masses find appealing.

All of which describes what proprietor/c.e.o. Balkar Tamber has going on at the new 140-seat Sakoon in Mountain View, CA.

It's not that Tamber doesn't know how to operate a traditional Indian restaurant business. He's got four of them. Their success is aided by the large Indian contingent who live and work in the area around Silicon Valley's Mountain View, most of them high-earning engineers, technology workers, physicians and college professors.

But Tamber wanted to create a more exciting Indian restaurant experience, and he's got one now with Sakoon. It's a high-energy place where eye-popping design draws customers in and keeps them upbeat while they drink and dine. “I felt as if I had walked into a carnival with fireworks on a Bollywood movie set as I entered Sakoon,” says San Francisco Chronicle restaurant critic Michael Bauer. “It feels as glittery as a sequined sari.”

The food further elevates the mood, thanks to the work of CIA-trained chef Sachin Chopra. Celebrity chefs who specialize in Indian cuisine are few and far between in the U.S., the most prominent being Floyd Cardoz of Tabla in New York City. But Chopra might be the next one to emerge. Once a line cook at Daniel in New York City, he's fluent in both Indian and western cuisines.

Chopra describes Sakoon's menu as “a culinary journey of Indian regional cuisines, using local sustainable ingredients accented with modern interpretation.” It's an exciting combination for those already familiar with Indian cuisine, but one that could be off-putting for first-timers or recent converts.

Sakoon meets this challenge head-on. It has a terrifically well-written menu that explains what's in every dish in a way that even neophyte diners can relate to. For example, those unfamiliar with the cuisine would be unlikely to spring for a starter of Saufiya Paneer that costs $7.50. But when they see it described as “cube of farmer's cheese marinated with fennel and sun-dried tomatoes and served with warm mustard seed, fennel and basil oil, salad of daikon” they're ready to give it a try.

Bauer sure liked what he ate at Sakoon. “The chef is masterful in the way he teases the taste buds, heating up and cooling down the palate, balancing all the elements,” he wrote in his two-and-one-half star review. “It's a repertoire that's modern but is strongly rooted in tradition.”

A final piece of the puzzle is that Sakoon's sexy décor and high-quality food put it into the white tablecloth category, but its price points are more like those found in the polished casual segment. Items on the bar bites menu cost between $6-10, entrees go from $16-$24 and even the tasting menu ($35 for the vegetarian version, $40 for the non-vegetarian) is downright reasonable.

Many other Indian restaurants in the U.S. provide an experience that is like stepping into India. This one enables patrons, Indian or not, to step into a hip contemporary restaurant that happens to serve stylish Indian food. That's why we think you should keep your eye on Sakoon. It's the type of place that could finally bring Indian food into the mainstream.