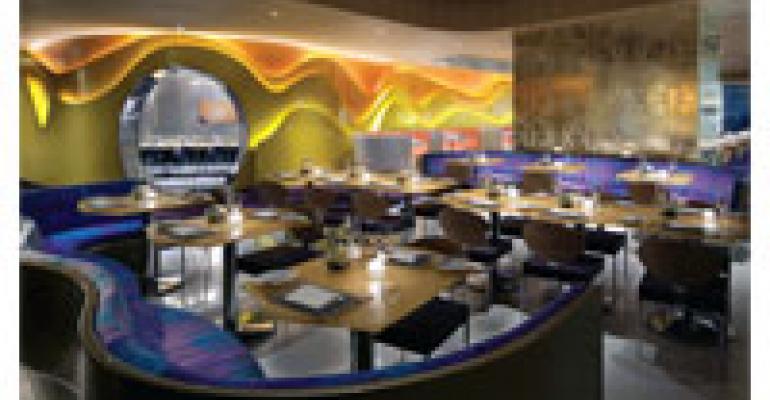 Debut: All Over The Map, In A Good Way

It takes executive chef Martin Heierling just two minutes to walk from the kitchen of his first Las Vegas restaurant — Sensi, located in the Bellagio — to that of his second, Silk Road, situated in the new Vdara Hotel. His menus are eclectic at both places, with Sensi's embracing four cuisines — Italian, Asian, American Grill and Seafood — while Silk Road offers dishes drawn from a geographic swath that stretches from Asia through the Middle East and on to Europe. But the business models at Heierling's two restaurants couldn't be more different.

Consider. Sensi is a dinner-only operation that's one of multiple dining anchors in the 4,000-room Bellagio. The non-gaming Vdara is a smaller (1,495 rooms) but still sizable all-suites hotel, and there's just one restaurant in this 57-story building — Silk Road. It serves all three dayparts, beginning at 7:30 a.m.

The big money maker could be breakfast. Vdara supplies a sizable built-in clientele. Its guests could head next door to Bellagio. Or they could stroll over to Aria Resort Casino which, like Vdara, is part of the massive new $8.5 billion CityCenter complex. There's even a monorail to transport them if they don't want to walk. But not much is open early in either place beyond the buffet and the 24-hour coffee shop. The Aria in particular has restaurants from star chefs galore — Julian Serrano, Sean McClain, Masa Takayama, Michael Mina and Jean-Georges Vongerichten — but none of them serve breakfast.

Heierling does, and he's elevated both the offerings and the price points at the Vdara. Just the usual “American” breakfast (juice; two eggs any style; ham, bacon or sausage; potatoes; toast; and coffee) goes for $22. The blueberry and ricotta pancakes cost $16 and a maple sugar waffle is $14. More adventurous patrons can choose the free-range turkey hash made with Turkish eggs, spiced Kirmizi butter and Greek yogurt relish ($17) or a roast boudin noir served with sherry-braised onions, fennel and green apple slaw ($20). A simple English muffin costs $8. Hey, it's the only chef-driven breakfast around and you're in Vegas; why not splurge?

But Heierling's much, much more than a breakfast cook. His lunch and dinner menus show off the skill he has developed at outposts around the world. A native of Germany who was raised in New Zealand, he was a star chef in both countries. His lone U.S. job was at Lespinasse in New York City when chef Gray Kunz, a kindred culinary soul, ran the kitchen.

It's an ingredients-driven menu that's more focused than it sounds from our abbreviated description. The offerings reflect the well-traveled Heierling's take on the culinary diversity to be found along the ancient trading route that gave this restaurant its name. “Marco Polo established the Silk Road,” Heierling explains. “First came fabrics, like silk, and then spices, then many other items, including religion.”

Heierling is careful to serve faithful renditions of the dishes he's chosen from this vast part of the world. “It's all authentic food, ingredients and recipes,” he says. “I don't invent them; it's what is served in homes in Turkey or the other countries.”

Those authentic ingredients include an array of imported ingredients that would make most chefs' head spin. For example, Heierling figured out a way to import pashmak, a delicious, pink rosewater-flavored dried cotton candy from Iran; dozens of other ingredients seldom seen in U.S. kitchens are cornerstones of Heierling's eclectic menu.

Yet Silk Road's offerings, while diverse, avoid culinary chaos. “I don't do fusion cuisine, he says. “I feature lots of cultures on one menu.”

A final part of the business plan is Silk Road's location within Vdara. Most big-ticket Las Vegas restaurants are hidden away in giant casino/hotel complexes. Silk Road has high visibility because of its first floor frontage. Guests can walk by and see in from sidewalk level.

All the better to attract Las Vegas residents. “Because we're not attached to a casino, we have to cater to locals,” Heierling says. “They don't like to walk through casinos to get to a restaurant. At this one, they can valet park directly in front and step inside.”

This rare end-cap site is another reason why in a town full of desirable restaurant locations, Heierling appears to have come up with one of the best.