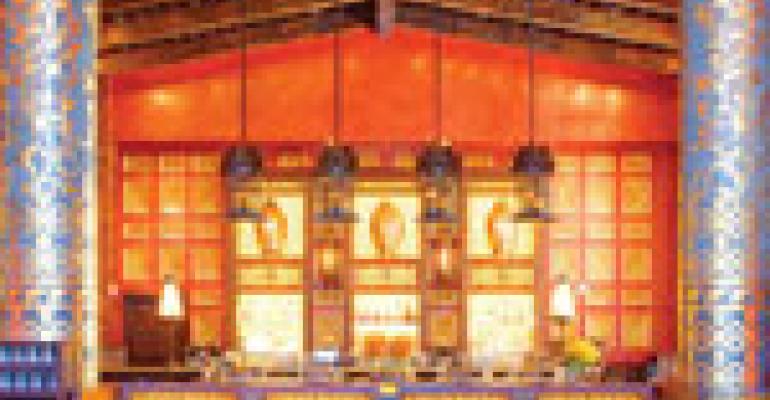 Everything connected with David Overton's first two concepts, The Cheesecake Factory and Grand Lux Cafe, is big: their menus (200-plus items at Cheesecake; 150 at Grand Lux), their portions, their dining spaces, their lines to get in and, most importantly, their grosses. He's shooting for more of the same at his company's new RockSugar Pan Asian Kitchen, which opened in June in the Westfield Century City Mall in Los Angeles. Except there's one more “big” item attached to this one: the risk.

Overton is arguably the most successful guy in the business, but he and the operations wizards at Cheesecake are stepping way outside their comfort zone on this venture. At RockSugar, they're offering a self-defined version of Pan Asian cuisine that includes food from Thailand, Vietnam, Malaysia, Singapore, Indonesia and East India. Purposely omitted are dishes from China and Japan — the Asian cuisines most familiar to U. S. diners. If RockSugar works, Overton will have succeeded in defining a niche and, for now, having it all to himself.

Overton and Co. are serving this food in a glitzy 7,500-sq. ft., 220-seat space located in the heart of West L.A. It's a lot of seats to fill when you're serving cuisines most customers probably haven't tried before. Even selling the one Asian cuisine U.S. casual dining patrons know and like — Chinese — has been a hit-or-miss proposition in the full-service chain segment, with P.F. Chang's being the hit and Darden's China Coast the epic miss.

But while Overton and his Cheesecake Factory colleagues are rolling the dice at RockSugar, it's a rare opportunity for their fellow restaurateurs. The entire industry gets to watch how this well-run, highly profitable company tackles new concept creation.

Some elements at RockSugar reflect lessons learned at the Cheesecake Factory. The real estate is choice and visible: an end-cap unit in Century City, fronting on Santa Monica Blvd. In fact, the restaurant is situated not far from the Beverly Hills spot where Overton opened the first Cheesecake Factory back in 1978. Today that concept has 143 units. The only thing that isn't oversized about it is the check average: $17.50-$18.00. Part of the genius of Cheesecake Factory is that it provides much of the aura of a highly expensive dining experience at an affordable price.

RockSugar's price points are slightly higher than those of Cheesecake Factory, but below those of the company's 13-unit upscale concept, Grand Lux Cafe. And its menu is more focused (i. e., at 59 items plus 10 desserts, it's closer to standard size for an upscale casual restaurant). Items are served family style, so over-the-top portion sizes are no longer in play.

But other aspects, although slightly reinterpreted for RockSugar, remain much the same. Like Cheesecake Factory, the gigantic space (35-foot-high windows) and ornate and opulent décor (Burmese Buddha statues; hand-carved teak timber beams; dragon sculptures) combine to create a sense of event customers can't get elsewhere unless they're paying a lot more money. And while RockSugar doesn't offer a cheesecake dessert per se (although an all-tofu version is available), an onsite pastry kitchen brings French flair to a lineup of a dozen Asian-influenced items that, at $8.50 each, should be check-builders supreme. There's a full bar, too. In short, RockSugar is set up to be a money-making machine like its corporate brethren,

Which it will be if customers can relate to this take on Pan Asian food and return frequently to eat it. Overton and executive chef Mohan Ismail (who previously cooked at Spice Market and Tabla in New York City) worked together for three years to perfect each item. Signature dishes from the six Southeast Asian nations represented on the menu include:

Overton thinks he's in the right place at the right time. “L.A. is a natural launching pad for a Pan-Asian restaurant concept, given the exciting dynamic of the Pacific Rim and the influence of Asian culture in this city,” he says.

Let's hope so. RockSugar almost has to work. Overton is chairman/c.e.o. of a public company with a $1 billion market cap. Investors want to see a third concept under the Cheesecake Factory banner that will lead to future growth. If RockSugar catches on, they've got one. If the past is prelude to the future, it will.