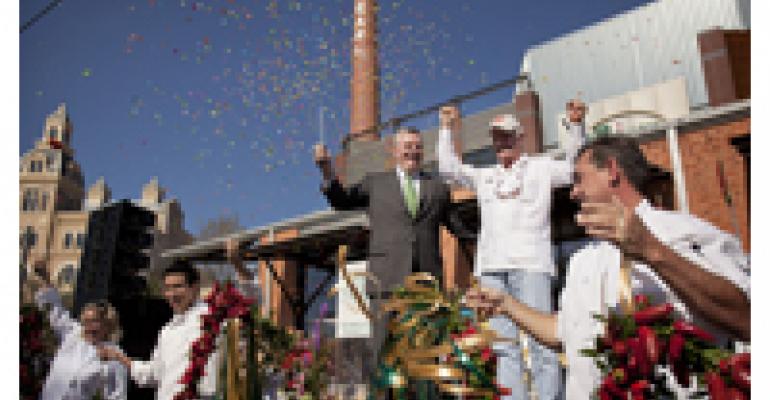 The Culinary Institute of America recently spiced up its reputation with an expanded presence in a heavily Latino market, San Antonio.

The CIA just opened a 30,000-square-foot expansion, marking the event with food, music, a healthy snack competition for local high school students and demos by chefs from Rick Bayless to Johnny Hernandez.

The facility is the second phase of the institute’s El Sueno initiative, launched in 2007 to promote Latino diversity in foodservice. “There’s a foodservice industry reality that we’d like to change,” said Tim Ryan, CIA’s president. “ Depending on where you live, 25 percent to 75 percent of kitchen and restaurant workers in the foodservice industry are Latino. However, just a small fraction of them rise through the ranks to leadership and ownership positions because they often lack the required education. The CIA is here to support an important mission: to elevate Latin American cuisines to their rightful places among the great cuisines of the world, and to provide access to a world-class CIA education to young Latinos, so that they can assume the mantle of culinary leadership in the generations to come.”

Students will hone their skills in three new teaching kitchens, two skills kitchens designed to support the CIA’s core curriculum programs and a one-of-a-kind Latin kitchen. The second floor features a professional bakeshop sponsored by Dunkin’ Donuts, classrooms and an additional demonstration theater and conference space. The expansion also includes a new computer lab, library and offices for faculty and administrators. The campus also houses the Center for Foods of the Americas, where researchers document and teach traditional cooking methods.