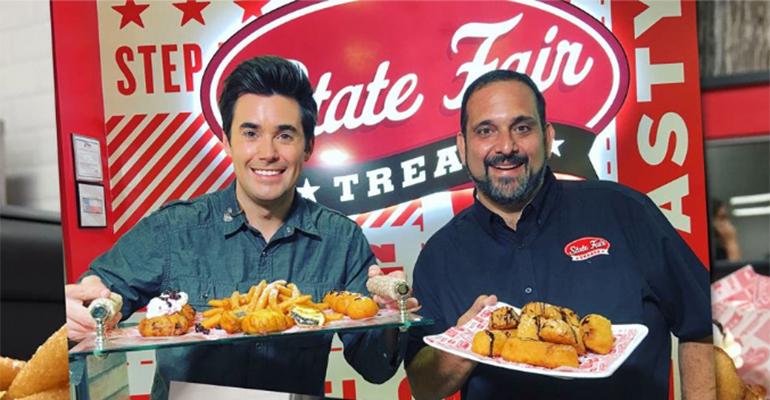 Industry statistics show restaurant traffic slowing during 2016, but that’s not going to be an issue for State Fair Treats. Each day, more than 5,000 potential customers will pass by this new operation’s site at the entrance to the Plano, Texas, Walmart Supercenter.  Open since Sept. 20, it’s the first of what owner Isaac Rousso hopes will quickly become many locations for his fair food-themed chain.

Rousso is used to dealing with large numbers of customers. State Fair Treats might be his first restaurant, but the multiple food concessions he runs at the Texas State Fair give him plenty of experience in high-volume foodservice operations.

“During the State Fair of Texas, we have the opportunity to serve more than two million people during the fair’s 24-day run,” he says. “At our first Walmart location alone, we’ll have the chance to see 1.5-2 million people per year.”

The 45-item menu at State Fair Treats will focus on food items typically found on state fair midways. Prices range from $1.50 to $7.50. Several offerings have been invented by Rousso, a many-time winner of the Big Tex Choice Awards contests that honors creative food items — many of them deep-fried — introduced at the Texas State Fair each year.

WalMart is Rousso’s landlord, not his partner in this venture. But the retail giant sought him out in hopes of interjecting some much-needed energy into its stores. Rousso expects State Fair Treats will gross about $1 million per year. He told the Dallas News he plans to have as many at 15 units open by the end of 2016.  From there, the idea is to take State Fair Treats nationwide.

He just might pull it off, too. Rousso began by operating a single booth at the Texas State Fair, Taste of Cuba. He has since added four more: Magnolia Beer Garden, Magnolia Pavilion, Magnolia Smokehouse and Craft Beer Terrace.

Along the way, he’s become a culinary force in the fair food community. State fairs are justifiably famous for the exotic deep-fried treats available on their midways. Dietitians grimace when they calculate the caloric values of these sugar- and fat-laden concoctions, but Texas fairgoers embrace them. Rousso hopes Walmart shoppers will, too, and will want to eat them year-round.

Rousso has won this contest before. He did so again in 2016 with his Cookie Fries entry. Its official description: “The cookie fry may look like it needs ketchup, but don’t be fooled by the classic crinkle-cut appearance. Offered in traditional cookie flavors like chocolate chip or sprinkles, these sweet treats are served with your choice of the accompanying strawberry or milk chocolate sauce. Just consider it an undercover cookie in fry-form disguise.”

Cookie Fries are a key menu item at State Fair Treats. So are some of Rousso’s previous  contest winners including the Deep Fried Cuba Roll and his Fried Pop Tart. This video gives you an idea of what works and what doesn’t in this contest:

The State Fair Treats business model seems solid, perhaps even enviable. The concept serves food whose popularity has already been proven by millions of Texas State Fair attendees. And its expansion path is clear: stick to sites carefully chosen from the landlord’s roster of 4,600 heavily trafficked retail locations. Even the marketing is a no-brainer — 5,000 potential customers will walk by the State Fair Treats’ entrance every day without Rousso having to lift a finger.

The lone potential drawback: customer eagerness to binge on wacky deep-fried foods may not be an everyday occurrence during non-fair times. But if it is, Rousso may be able to build out his chain at a pace the restaurant industry has seldom seen before. "There are many, many McDonald's that are going to be transitioning out" of Walmart stores, Rousso says. "We're going to be looking at every opportunity as they transition out, to jump in."