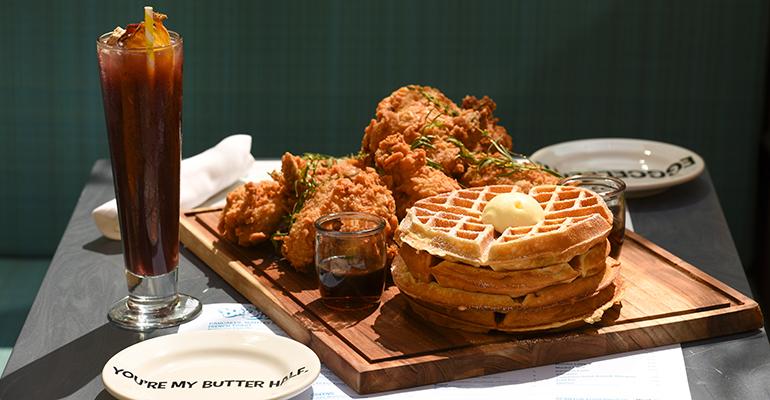 “At The Breakfast Club our focus is on the art of hospitality, breakfast nostalgia, and inviting the ever-growing digital creator community to find a home at our establishment. Our goal was to construct a restaurant fit to be the center of digital culture, to inspire creativity while serving great food and drink,” said Robbie Earl. “Our work with creators like MrBeast, Larray, and Tana Mongeau on their virtual brands demonstrates the incredible relevancy and relatability that today’s creators have with their audiences. We are building on that experience with Breakfast Club—a space for creators to enjoy and use as a backdrop to express themselves.”

A pastry and espresso bar, along with a cocktail bar, complete the menu at The Breakfast Club which is open for breakfast, lunch and dinner and is located in a 7,000-square-foot space at 1600 Vine.

The two Earls have previously partnered on 1600 Vine, described as an “influencer playground” in Los Angeles. It’s an apartment complex designed to be photographed where social media stars with millions of followers are known to live.

“For 30 years and counting, the Planet Hollywood brand is recognized as an authority on entertainment and popular culture and has expanded from restaurants and bars to include hotels and gaming. Now, with Breakfast Club, Robbie and I look forward to a new chapter in the legacy with the next generation of creators and we are excited to see where this brand will lead us," said Robert Earl.