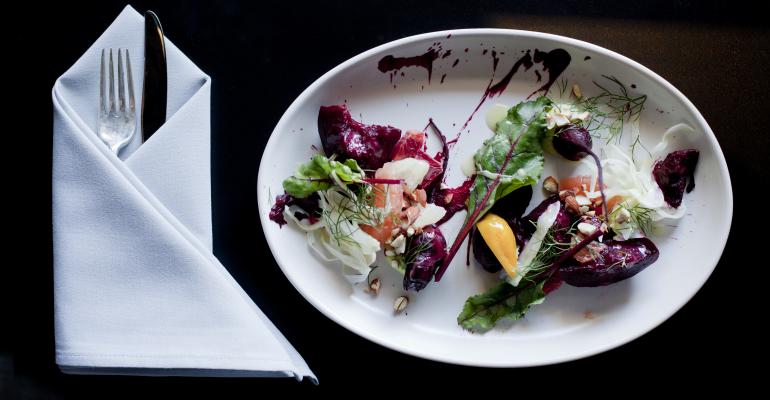 <p>Leaves and skins of beets and carrots have a place on the plate at Wolf.</p>
Trends>New Restaurant Concepts

Chef Marcel Vigneron is opening two adjacent restaurant concepts in Los Angeles that will take a “zero-waste” approach to cooking.

First came Wolf, which opened in early March. The 60-seat restaurant features seasonal dishes that reflect the city’s cultural diversity with a more rustic tone than the chef is typically known for.

Having worked with chefs like José Andrés and Joël Robuchon and appearing in TV cooking shows from Top Chef to  Marcel’s Quantum Kitchen, Vigneron has earned a certain reputation for molecular gastronomy. But Wolf, named for the English meaning of his mother’s Celtic maiden name Phelan, goes for dishes that are both “comforting and complex,” according to press materials. On the opening menu, for example, are dishes like roast chicken with cipollini, bagna cauda, escarole, salsify and celeriac; as well as braised beef cheek with Jerusalem artichokes, turmeric peppercorn sauce and baby chicory.

“I told José I was doing this several years ago,” he says. “I’m not sure why he decided to do the same thing.”

Both Wolf and Beefsteak will have a full bar and will be run as separate operations, though there will be crossover in the kitchen. That’s where Vigneron’s philosophy of using every edible part will be applied.

Why is zero-waste important to you?

Chefs are nurturers by nature. We take care of people and feed people. But, as a chef and working in so many restaurants, you see how much food gets wasted.

Working in the kitchens of prominent French chefs, I learned so much. Their technique is superior and the food is amazing. But one of the problems with doing super duper high-end cooking is that you have to have a perfect dice or perfectly straight asparagus. Everything has to be uniform. There has to be a way to make this really good food and maybe have more rusticity to it, to yield more from your product and potentially charge less because you don’t have so much waste, and to feed more people—not just those who can pay $300 for dinner but also those who can pay $25 or $45.

When did you start doing this?

When I was working for Robuchon, we tried to create this program where we collected food waste and sent it to the hotel’s commissary kitchens, and the hotel started giving us money for it, so we saw this had value.

Later, when I was operating my mom-and-pop catering company, I couldn’t afford to throw anything away. I was using my potato skins or parsley stems, and I realized the food tasted so much better. Using the coriander with the stem of the cilantro with the leaf and putting all those parts of a plant’s life cycle together makes things more delicious.

So it has several aspects: It’s to do my part for the environment and society and to have good overall karma. It makes food taste better. And, lastly, it’s a business and all food has value.

Can you provide some examples?

We cook all our onions with the skin on. We’ll take the skin and use it in stock or make a puree out of it. With our carrots and beets—I get them from a phenomenal farm, County Line Farms in Northern California—I don’t peel them. We use the tops in the dish. For our lamb Romanesco, we’ll saute the Romanesco florets, but take the stem or heart and make a beautiful puree.

For our chicken, we’ll render the fat and cook the chicken in the fat or make family meals for staff from the leftover bits. In the bar, we’ll use scraps of lemon to make limoncello and things like that.

Having two concepts helps. If we have too many carrot tops at Wolf we can use them to make a pesto for Beefsteak.

How would you say your waste compares to a typical restaurant?

The average kitchen probably wastes about 30 percent. I would say we’re in the 5 percent range.