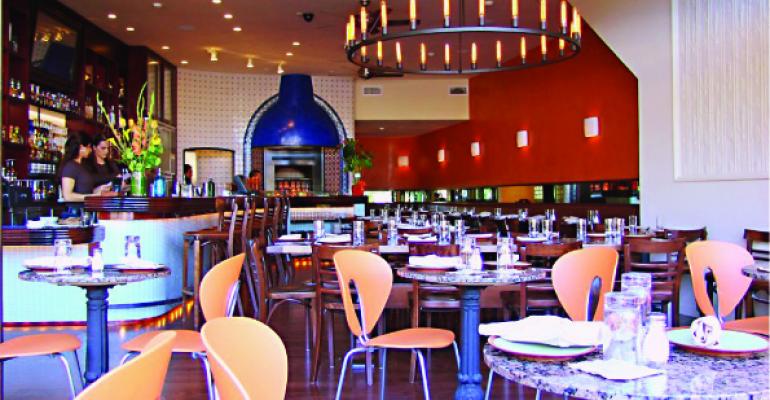 Restaurateurs Larry Mindel and Joanne Weir have made their name with Italian and Mediterranean ventures, but they&#39;re taking their first crack at Mexican with Copita Tequileria Y Comida. 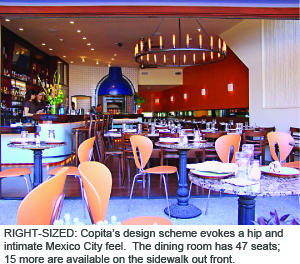 If you’re wondering how well expertise in one ethnic restaurant segment translates into another, pay attention to the new joint venture from Larry Mindel and Joanne Weir. Each partner has scored success many times over in the Italian and Mediterranean realms of the foodservice world. But they’re taking their first crack at the Mexican restaurant game with the opening of Copita Tequileria Y Comida in Sausalito, CA.

Mindel is at a point in his career where most people would rest on their laurels, particularly if they had laurels like his. The longtime Il Fornaio boss has operated more than 30 authentic Italian restaurants, doing well enough at it that the Italian government gave him its Caterina de Medici Medal for his contribution to preserving Italian heritage outside of Italy. The 1959 U. of Michigan grad is the only American and first non-Italian to be so honored.

Mindel is still into creating cool new restaurants, providing they’re within walking distance of his Sausalito home. That’s where you’ll find Poggio, the perpetually filled trattoria he opened in 2003. Copita is located just a few blocks down the street. His job title at Copita: Host. 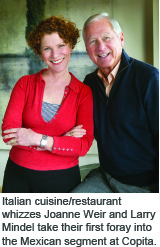 Weir is a food world celebrity of the highest order, having written 20 cookbooks and presided over seven seasons of PBS cooking shows. Like Mindel, her specialty is Italian food, although she’s also an expert on wine country cooking and Mediterranean fare. Her title at Copita: Maestra de Cocina.

Weir hasn’t cooked in a working restaurant since her days at Chez Panisse (1985-1990), so her grind-it-out skills may take a while to kick back in. But her knowledge of tequila couldn’t be more up to date. She’s the author of Tequila: A Guide to Types, Flights, Cocktails and Bites (Ten Speed Press; 2009; $16.99). It features recipes that focus on tequila-infused sides, mains and desserts. This book caught Mindel’s eye and the two friends wound up in business together.

They’re keeping it manageable. Poggio is a good-sized restaurant, with 144 seats. Copita is much smaller—47 seats with another 15 available out front. The menu’s small, too—22 items in all, including sides and desserts.

Given Weir’s long-term focus on introducing small plate recipes drawn from cuisines around the globe, it’s not surprising that Copita’s menu is structured the way it is.

There is just one entree-sized plate: rotisserie chicken, prepared in the wood-fired oven that sits in Copita’s dining room. The birds are rubbed with guajillo chiles, then spit-roasted and served with pickled spring vegetables, chorizo-laced black beans and fresh tortillas. Cost is $14 for a half, $28 for a whole. 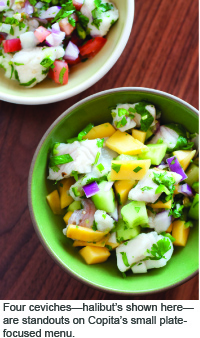 The food at Copita is top-notch, but there’s a reason “Tequileria” comes first in the restaurant’s tag line. Weir has tequila expertise like few others, and they’re leveraging it to the max at Copita.

Customers who like their tequila straight up can take their pick of 87 specialty tequilas. Copita makes them available in several formats:

Eight beers (four on tap) and nine wines (one of them a chardonnay that bears Weir’s proprietary label) round out the alcoholic beverage items.  House-made agua frescas and 100 percent natural homemade sodas concocted from local seasonal ingredients headline the nonalcoholic drink offerings.

Copita’s food reflects Mindel’s and Weir’s California cuisine sensibilities. Items and ingredients change with the seasons, and there’s lots of grilling and roasting. The idea is to offer destination-quality flavors in a casual atmosphere. The menu per se doesn’t break much new culinary ground, but the flavor profiles and just-picked ingredients make each item stand out.

So take heart if you dream about tackling a new cuisine or concept that seems to be outside your current expertise. Mindel and Weir are showing at Copita that once you master a certain restaurant segment, you’re probably ready for the next one.