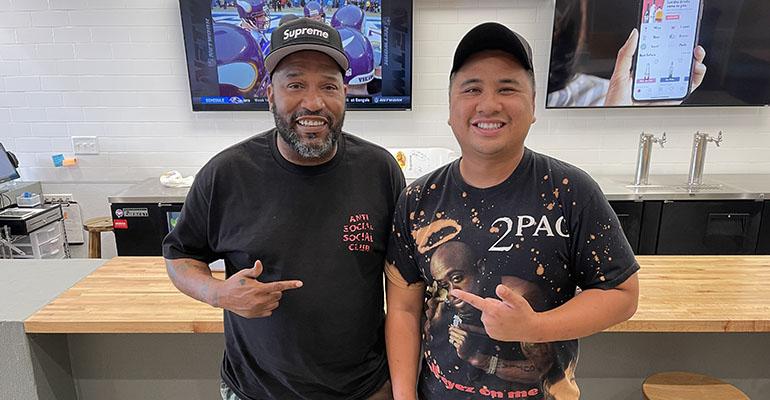 Houston rapper Bun B is teaming up with Andy Nguyen – founder and owner of Afters Ice Cream, Dough and Arrow and eight other concepts in California – for a new popup in Houston called Trill Burgers.

This will be Bun B’s – who is one half of the rap duo UGK – first foray into the restaurant world.

“For years I’ve been fascinated with the culinary scene, trying to find the best entry point for me,” Bun B said on Instagram. “Today I can say I’ve found it.”

Trill Burgers is named for Bun B, who is known as “Trill OG.”

“[Bun B] loves the food industry. He's like, he's been a foodie himself and now it's his chance to get on my side of the stage,” said Nguyen.

The smashburger concept will open in August inside of Sticky’s Chicken, owned by siblings Patsy and Benson Vivares. Nguyen is a partner Sticky’s, the popular Houston food truck which turned brick-and-mortar concept in 2019. The Vivares siblings will lead culinary operations for Trill Burgers.

“Coming out of the pandemic, we were brainstorming ghost kitchen and pop-up ideas with Andy, and he kept coming back to the concept of smashed burgers,” Patsy Vivares said in a statement. “Through our publicist and friend Nick Scurfield, we set up a meeting with Bun, and we all decided to partner together on this venture. I can’t believe it’s really happening!”

Nguyen was the one to bring the concept of smashburgers, popular in his home of California, to the Houston market. The fast-casual spot’s signature item will be the fried onion burger, an Oklahoma-style burger with two patties and fried onions on top.

“I think there's a void [in Houston]. In California everyone's doing the smashburger already and no one's doing it here in the South,” Nguyen told Restaurant Hospitality.

Though a menu is not yet available, Nguyen confirmed to Restaurant Hospitality that there will be a Cajun French fry and an orange creamsicle milkshake based on Bun B’s orange soda at the pop-up as well. Consumers shouldn’t expect much more in terms of quantity.

“We're going keep the menu as simplified as possible. We're going have our core fried onion burgers, a simplified burger and a vegan version,” said Nguyen. “We'll do your regular fries, but we'll do some special seasonings and sauces for it. We'll probably rotate through flavors of the milkshakes along the way.”

The first brick-and-mortar is in the works, but papers haven’t been signed yet. Nguyen did not disclose the location.