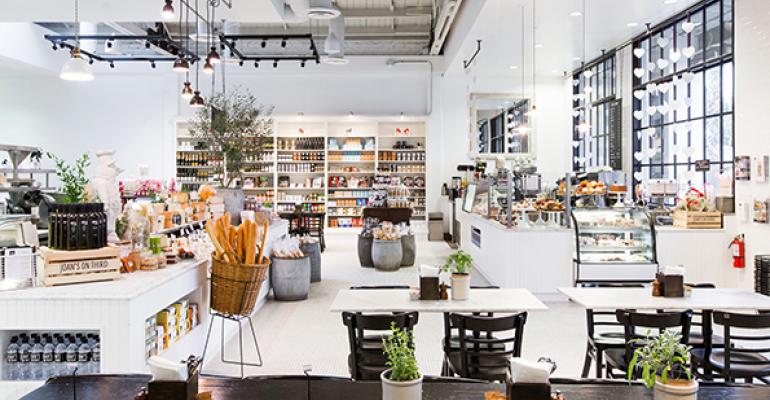 Newcomers are borrowing the Eataly model, which aims to be all things to all food lovers. &bull; See more New Restaurant Concepts

Mario Batali’s Eataly may be coming to Los Angeles in 2017, but local diners will already be well versed in the hybrid concept that is part restaurant and part shopping destination.

Eataly was originally founded in Italy in 2007 but debuted in New York in partnership with Batali’s B&B Hospitality Group in 2010. The 50,000-square-foot multi-outlet megastore often gets credit for launching the latest variation on the blended concept of a restaurant within a retail store—or is it the other way around? Either way, versions of the restaurant/market hybrid have popped up across the country, especially in L.A., where a handful of unique collocated concepts have opened in recent months.

The idea is that guests can either pick up ingredients for dinner cooked at home—or grab a quick coffee, glass of wine, sweet treat or hostess gift. Or they can have dinner, whether a self-serve bite or a full-service meal.

Most of these newcomers operate during all three dayparts and, as a result, have become neighborhood hubs, says Mimi Mok, cofounder and president of Stir Market in the mid city neighborhood.

“For us, it’s about providing this dynamic atmosphere,” she says. “We were really looking for that hustle and bustle of having people in to buy wine, or have an espresso, but bumping into people they know who are having a full meal.”

But where Eataly focuses on all things Italian, these L.A. operators spotlight local artisans, ingredients and products.

Here’s a look at restaurant/market hybrids across L.A., old and new:

Stir Market opened in November 2014 in midcity L.A., with a menu created by Food Network personality and chef/partner Jet Tila.

The main component is the 4,000-square-foot restaurant, with a menu built around rotisserie chicken, porchetta and salads, accompanied by various sauces. There’s also charcuterie and sandwiches, wine and craft beer, along with an espresso bar and artisan bakery. Prepared dishes are packaged for grab-and-go.

Top-selling dishes include an avocado toast, and Moroccan-style baked eggs with chickpeas, peppers and merguez sausage.

Woven throughout the space is a retail selection of curated packaged goods, representing less than 20 percent of sales, but the offerings drive traffic, Mok says.

“It brings people just stopping in who aren’t dining here, grabbing something for a party or for dinner at home,” she notes. “We’re a place where neighbors come in multiple times a week. They view us as their kitchen away from home.”

More locations are planned, but Mok said it’s too soon to say when and where.

The concept is being courted by real estate developers looking for a unique three-daypart concept to put in the base of luxury apartment buildings, Mok adds.

“They see us as a perfect amenity. It’s a gourmet market with all-day dining,” she observes. “They’re building these amazing buildings with high rents and they can’t put the usual chain restaurant at the base. They’re looking for something a little more sophisticated.”

Open in November 2014, the 5,000-square-foot space is set up with various “culinary vignettes,” from a wine bar to a boulangerie. In one corner, guests can choose house-made pizza out of a wood-burning oven, and in another they might find rotisserie duck, fresh house-made pastas, a wok-cook station or charcuterie. A wall of wine features more than 350 bottles.

The venue opens up Arabia’s “global cuisine essence” to all, he said. His larger catering and event company can’t handle smaller groups. “The machinery is too big,” he said.

GC Marketplace, however, is designed to handle both on- and off-premise dining, catering, delivery with the option of both set up and service.

“We have an on-premise sommelier and a cheesemonger,” he said. “It’s not like going into a Whole Foods. You’re dealing with a sophisticated, talented team of people who really know their craft.”

The retail side features some private-label items, like the coffee, which is a house blend, and a house-made Sriracha that Arabia described as more “Thai style than Vietnamese.”

A second location is in the works in West Hollywood. It will be bigger—7,200-square-feet—and will include more in the way of seafood, Arabia says.

Originally from NYC, Joan McNamara grew up with retail/restaurant concepts like Dean & DeLuca and Balducci’s, but found nothing like that when she moved to L.A. in the 1970s to raise her family. She opened the original Joan’s on Third in 1995 in West L.A. as a catering company. In 1998, she expanded into an adjacent storefront, where she created a gourmet market and café.

As the business grew, she expanded again in 2007, tripling the size and adding more café seating, a communal table and an open kitchen. Stations feature grab-and-go offerings and private-label products, along with cheese, olives and imported retail products.

In September 2014, she opened a second location in Studio City, which does a brisk breakfast, lunch and early dinner business—especially on Sundays, when the area farmer’s market takes over the street.

Each venue offers daily changing specials, from Korean short ribs or poached salmon with tomatoes, garlic and fresh basil in the deli case to hot plates like lobster macaroni and cheese or roasted sea bass with sun-dried tomato and artichokes.â€‹

McNamara sees her concept as less restaurant and more market-café. Although dine-in is an option at all dayparts, it’s not a full-table-service operation. Both locations close at 8 p.m., allowing her staff to “have a life,” she adds.

Tucked in an exclusive enclave of Santa Monica, the 5,000-square-foot Farmshop opened in 2010 with the goal of being part full-service restaurant, part market and part story teller, showcasing purveyors like the fresh produce of Weiser Farms in Tehachapi, CA, to the cheeses of Cowgirl Creamery in Petaluma.

Created by Jeff Cerciello, former director of casual dining for the Thomas Keller Restaurant Group that includes The French Laundry, the concept strives to “honor those farmers and artisans without whose livelihood our tables would be empty.”

The three-daypart concept initially offered dinner as a one-menu, three-course option, served family style. Later Cerciello moved to an a la carte menu, though the restaurant follows the one-menu format on Sundays, when the signature fried Jidori chicken is offered with seasonal sides.

A second Farmshop opened in Marin in 2013, and Farmshop Tokyo is scheduled to open later in 2015.

Also designed for three dayparts, the 1,400-square-foot Dudley will feature house-made grab-and-go and dine-in options for breakfast, lunch and brunch, like quiche with artichoke, spinach and gruyere or a chicken liver banh mi with pork rillettes, carrots and cilantro.

At dinner, the market will transform into a 20-seat full-service restaurant offering seasonal dishes like potato terrine with grilled squid or lamb belly with split beans, morels and cava, as well as a seasonal-ingredient-driven omakase menu.

The retail selection, curated by Barber’s wife Celia Barber, will include products used in the restaurant kitchen, like Sfoglini Pasta or Ritual Chocolate.

Though Venice is a hot restaurant destination in Los Angeles, Barber explains that the concept is designed to appeal to locals. Its “weird” location on a one-way street off another one-way street has very little parking, though bikes are welcome.

“It’s all about the lifestyle and building a community,” Barber says. “We want to be a place where people can get some eggs in the morning, and pick up some really great olive oil for their salad at lunch, but then come back for a nice dinner.”