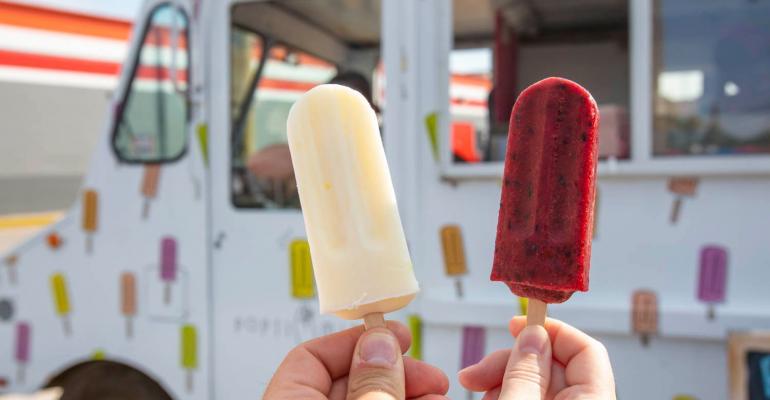 Chef Brian Hardesty has cooked in the St. Louis area for about 30 years or more at restaurant concepts that ranged from fine dining to food trucks. Now Hardesty is leaning into his food truck experience, but not as a chef.

Hardesty is managing partner of 9 Mile Garden, Missouri’s first Food Truck Garden in suburban Affton, just outside St. Louis, now in its third season. A collaboration between Hardesty and Seneca Commercial Real Estate, it’s a spot where food trucks can gather seven days a week to serve both lunch and dinner.

In fact, it’s the sort of place Hardesty said he wished was available when he was in the food truck business.

“About 13 years ago my best friend — who is Filipino — became my business partner and we got the idea to start a food truck,” Hardesty said. “We decided to be pioneers in Filipino food, with Guerrilla Street Food. We still own the truck, but we’re hopefully selling the business. I really don’t do much with the company anymore.”

Guerrilla Street Food had participated in various food truck events around the country and Hardesty had always wished for a venue like 9 Mile Garden, which could better support the food truck community. “Dinner services didn’t happen very often at other events,” he said.

“But I came up with an initial plan that would do exactly that — create a place for food trucks to come and build a consistent clientele. Then I met Seneca Commercial Real Estate about land they owned. We collaborated and came up with what you see today.”

The name, ‘9 Mile Garden,’ reflects a time before the advent of street signs, when people knew where they were based on landmarks and how far they were from them. 9 Mile Garden lies approximately nine miles from the old downtown courthouse. Another influence on the name was to recall when farmers sold items from truck gardens before farmer’s markets began.

The concept supports innovative local chefs and food trucks, brewers, and farmers, while providing a family-friendly environment with outdoor movies, live music, and community events. Dogs are welcome, too.

Among the trucks participating this season is one of the first food trucks to operate in St. Louis, The Fire & Ice Cream Truck, which serves Serendipity Homemade Ice Cream and treats from a vintage 1946 Ford Fire Truck. Veteran-owned Lorenzo’s Tacos & Burritos offers traditional Mexican fare, such as carne asada street tacos, tamales, and elote (corn on the cob). The menu at Zacchi Jordanian Cuisine includes shawarma or hummus and non-dairy shakes. The La Cosecha Coffee Roasters coffee truck serves as an extension of the popular coffeeshop. Clara B’s Kitchen Table offers comfort food similar to its brick-and-mortar sister restaurant. And, at Doughboy’s Wood Fired Pizza's truck, the name says it all.

Hardesty chooses which food trucks will participate by assessing food quality, style of cuisine, and how well a truck handles large crowds. He also strives to keep the lineup as versatile as possible. “We do have a waiting list, for when we don’t jive well with an individual truck, and we call the next most appropriate truck,” he said. “Last year we started off with 40 trucks, and then we trimmed it back a little bit.”

Each food truck pays a member fee and signs a contract to serve customers for the entire 9 Mile Garden season. There’s a monthly fee too, and a sliding scale service fee paid each time a truck parks at the Garden. It ranges from 0-10%, and averages around 5%.

“We’re in the beginning stage of our third season, so it’s an ongoing process to choose community organizations and charities,” Hardesty said. “We like to throw lots of events and sometimes we create one for a charity.”

And the truck garden idea is growing. Hardesty recently added another food-focused garden to his resume, as a managing partner with Frankie Martin’s Garden. Located in the St. Louis suburb of Cottleville, Mo., it should be completed by early summer.

This food truck garden will operate on several acres of land previously owned by iconic local resident, Frankie Martin, who passed away in 2020. According to Sauce magazine, Martin frequently drove his John Deere tractor through town, and assisted at local fish fries.

Award-winning food trucks at Frankie Martin’s Garden will serve lunch and dinner, daily, plus Sunday brunch. In addition to breweries, the garden will feature numerous reservable large pavilions and pergolas. Guests will be able to rent one of six pickleball courts or enjoy a sand volleyball court. A stage for musical and other performances, and an LED screen wall, will be combined into a single structure.

“But the indoor whiskey and wine bar is probably the biggest difference [from 9 Mile Garden],” Hardesty said. “Aesthetically the main bar is a gigantic pavilion that’s partially closed.”

“I personally have noticed the confidence to bring new cuisine to the market, a lot more,” he said. “Ten years ago, they might have just written it off. People are really taking full advantage of social media, too.

“I think one of the most important aspects of these [gardens] is that we’re designed to be an all-inclusive and safe space. It’s one of the primary driving forces in how we design these spaces. In five years, I hope that we’ll have three or four of them.”