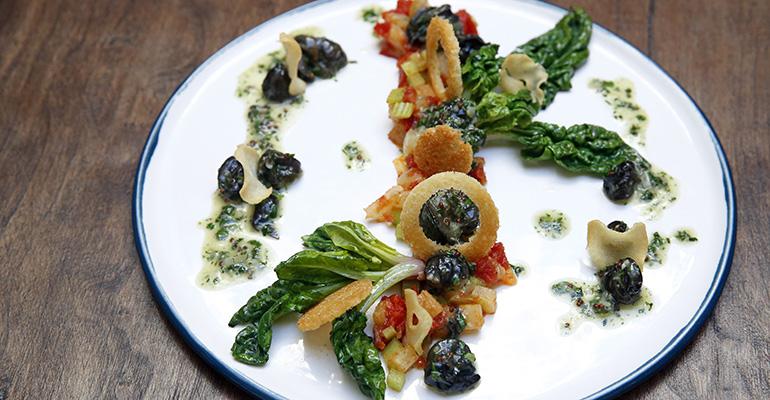 Fans of the Los Angeles restaurant Church & State waited anxiously for the second concept by executive chef Tony Esnault and his wife restaurateur Yassmin Sarmadi. It finally opened in early February as Spring in downtown L.A.

Like Church & State, the restaurant Spring is authentically French. Esnault is originally from the Loire Valley and in his earlier days cooked with famed French chef Alain Ducasse in Monte Carlo. But while Church & State’s menu reflects the richer bistro fare of Northern France, Spring features the lighter cuisine of the south.

Can you describe how Spring is different from Church & State?

Church & State is and has always been a very traditional French bistro, which by definition is typically food from north of France. Mostly the cuisine revolves around meat and poultry and less in the way of seafood. There’s very generous use of butter, both in cooking and on bread. The atmosphere is cozy, simple, tight.

Spring, by contrast, features the food of southern France, which is on the sea. So we use a lot more seafood. We use pastas and risottos, because there’s a lot of influence from the neighboring regions as well. In the south, both for cooking and condiment, people tend to use more olive oil.

In terms of the space, where Church & State is tight and small, Spring is more out of the garden. We want you to feel you’re sitting in a beautiful garden in the south of France. So we have trees in the room, there’s a fountain and the colors are much lighter and brighter.

The bourride, which is a like a bouillabaisse. It’s on the menu at Church & State, but it’s rustic with shellfish and a clear broth. At Spring, the bourride is essentially the same thing but there’s no shellfish. It’s a fish stew and it’s more intricately plated. When it comes to the table you’re served pieces of fileted fish on the plate and vegetables and the broth is poured over the aioli tableside. That’s something that’s pretty special here that I haven’t seen anywhere else.

So many restaurants are changing the model with tipping. Are you doing that at Spring?

We are not currently. However, I do think with the changes being made in California, particularly with labor laws and minimum wage, it is inevitable for restaurants to move away from the traditional model.

As the minimum wage goes up, the idea behind that is to find an equitable margin for everyone, for all people to live on. If that’s going to work, we’re going to have to make the wage the wage, and make it fair, a living wage, and make every employee comfortable with what they’re earning and their duties.

Whether you work in kitchen or front, you’re serving guests. There’s such a disparity between what happens in kitchen and front of house, with what people make, and to me that doesn’t make a lot of sense.

Both of our restaurants have open kitchens, so I think it’s important for the kitchen to be part of the dining room and visa versa. We require the front of the house to work two days in the kitchen.

We feel a restaurant is an integrated whole. If we’re all serving our guests and making a certain amount of money, it makes sense to me for that money to be distributed equally and to do that is to move away from traditional tipping and to include whatever that fee would be in your prices, and to explain to guests that this is what’s being done, and to make sure they have wonderful, perfect service.

If we take all the earnings and spread it around equally based on experience and longevity, we can make all restaurants a much more comfortable atmosphere for everybody, including diners. If you go to a restaurant and look at a menu and the price you see is the price you pay—while that may takes some getting used to—at the end of the day, that’s pretty nice.

So clearly you’ve thought about this. But you’re still not ready to make a change?

In order to make a change there has to be unity among quite a few restaurants. If we’re the only ones making change, it won’t be comprehensible to the general public or to the workforce.