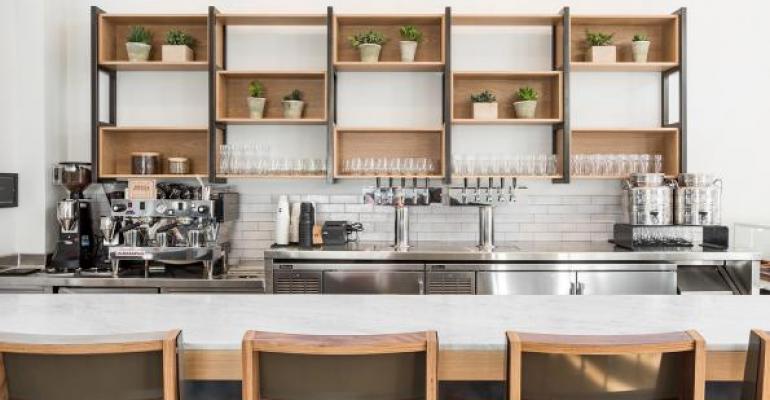 The fast-casual Split Bread concept is being rebranded as Split American Kitchen, more commonly referred to as simply Split.

The move comes with the November launch of the third unit for the San Francisco-based Split. The brand is owned by Good Food Guys Hospitality Group, a family operation that also owns the soon-to-be 10-unit Mixt Greens chain, now in Northern and Southern California.

Like its sister brand, Mixt Greens was also recently rebranded as simply Mixt.

The focus on one word offers symmetry and simplicity, but it also marks an evolution for both brands, which the company is positioning for growth, says Leslie Silverglide, who co-founded the group with her husband David Silverglide and her brother Andrew Swallow.

The three partners were pioneers in the fast-casual movement when they founded Mixt Greens in 2006.

Swallow, as executive chef and formerly part of the team at Gramercy Tavern in New York, set out to create a hybrid restaurant offering fine-dining-level food in a casual and affordable setting.

Mixt was about salads, created by the guest from seasonally changing local and organic ingredients and premium proteins, all made in house. Since then countless salad brands, including the high-end Tender Greens and Sweetgreen, have jumped into the niche.

“At the time, everyone thought we were crazy because people didn’t consider salads a meal,” Leslie recalls. “It’s amazing to see how that’s changed.”

Split Bread launched in 2012 as a sandwich concept. But people thought it was a bakery, Leslie says. Since then the menu has evolved to include much more than sandwiches.

Offering breakfast, lunch and dinner, the menu might include chorizo hash with poached pasture eggs, kale and sweet potatoes, for example, or Mt. Lassen trout with roasted sunchokes and pickled fennel for dinner with a butterscotch pot de crème for dessert.

There’s beer and wine on tap, or champagne by the bottle for brunch. All menu items are below $18, with most under $15.

Guests order at the counter and runners bring food to the table, Customers can also order online ahead and get a text when their food is ready for quick pickup.

The newest Split, which took over a former location of La Boulange in the Russian Hill neighborhood of San Francisco, has 49 seats, as well as an outdoor patio.

Leslie hesitates when using the word “diner,” but that’s essentially what Split has become, just with higher-level food.

“We don’t want to be a special occasion place,” she says. “Diners were places you could go anytime and it was always a great experience, and you knew what you were going to get. We wanted to create that same feel of being a local joint, but with today’s expectations for quality food and raising the bar.”

When Swallow developed the menu for Mixt Greens, the fast-casual space was young and still developing, with brands like Chipotle Mexican Grill at the lead as the “golden child, in terms of getting a better-quality quick-service meal,” says Leslie.

Now the fast-casual space is crowded with a growing number of high-end chefs offering better food with the more-efficient-to-operate model of counter service and off-premises business.

Still, Leslie sees plenty of opportunity for concepts like Split, with its clean-and-comfortable interiors designed to welcome both families and couples on a date.

That’s why the simple name Split made sense, she argues.

“We feel what we do is a bit of a different twist and flavor than everything else out there because it’s a higher-end experience,” she notes. “But it’s really a hybrid that is a split between fine dining and quick service. And we’re interested to see how it continues to grow.”