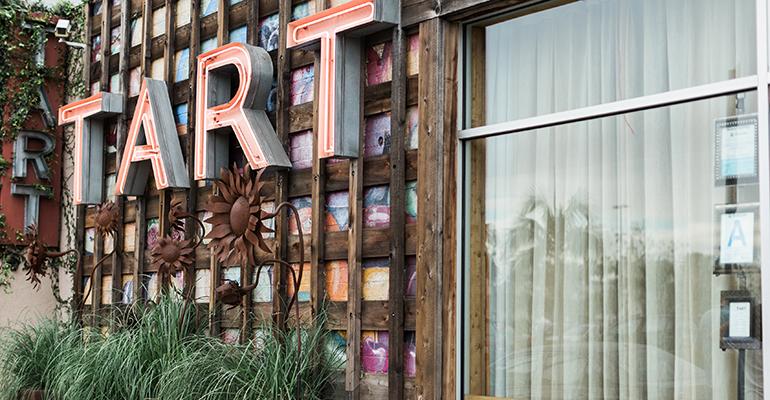 A decade ago when husband-and-wife restaurateurs Peter and Ellen Picataggio opened Tart Restaurant, the eatery attached to their 66-room Farmer’s Daughter Hotel in Los Angeles, they had a simple vision of a “Southern affair.”

What they didn’t have, however, was as much time as they needed to execute on it.

“The day the restaurant opened in 2006, my second son was born,” recalled Peter. “Through all the planning and opening, we had to step away.”

The original restaurant, which Ellen describes as “cute country with a twist,” was, nevertheless, successful, earning a reputation as a go-to brunch spot.

But more recently, the couple, inspired by travels through Europe, began feeling that times and tastes had changed and that Tart needed to change with them.

“I knew we had to come out of this straight Southern thing we were doing [and move] to what’s happening now,” said Peter. Ellen agreed.  “The [old] space was bright and open with not that much décor. It felt like a country breakfast place. We wanted to put a little sexy back to it,” she said, “make it sophisticated.”

Part of a multi-phase renovation of the hotel, Tart was rebranded in February with a design by Ellen in partnership with BAM Design Lab co-founders Annie May and Barbie Palomino.

The new-and-improved Tart has the vibe of a neighborhood European bistro with a touch of kitsch.

Flea market finds collected by Ellen, and works by established local artists, such as black-and-white abstract works by Ronald Santos, cover the walls. A china cabinet, one of a few holdover décor items, showcases tchotchkes and collectibles, such as Japanese ceramic toby mugs featuring faces of popular characters or historical figures.

Even the bathrooms got a sensual upgrade: The custom-wallpapered washrooms, which are now unisex, feature vintage-style, artist-created, peep-show boxes showing short videos.

Outside, a new deck with a red-brick fireplace, throw-pillow-topped chairs and benches, and strings of market lights invite guest to linger. A new “porch” area features three cabanas with fire pits and living room-like décor that can be rented for private parties or groups. Tart also has an updated menu, driven by new executive chef Josh Pebbles. The once-large menu, which Peter felt had become too “Denny’s-ish,” has been stripped down, keeping only a selection of the best items, such as the white cheddar macaroni and cheese and fried chicken and waffles.

Among a number of new dishes added were a market salad, house-made pumpkin ravioli and grilled lamb loin. Overall the menu, which will change monthly, now has a heavier focus on local and in-season ingredients.

For example, in the past when they hired chefs it was through traditional methods — gathering resumes, local hospitality services, word-of-mouth. This time Peter had a specific vision and launched a broader, more methodical search.

“Southern means a lot of different things to different people, which was a problem I didn’t know was there,” said Peter. “I went on a mission to find a genius in the kitchen that could bring more of a worldly view.”

Branding and a new, sleeker logo were also a part of the transformation. A forthcoming website revamp will give Tart a more unique identity, Peter said. Whether redoing the décor or tweaking the menu, the couple has kept competition top of mind. The hotel is directly across the street from The Grove, the massive outdoor lifestyle center with more than a dozen restaurants, as well as the Historic Farmer’s Market with its array of food stalls and sit-down eateries.

“We’re a boutique hotel and restaurant. I want to be unique, unique in flavor, design,” said Peter. “If I can get it down the street, [we] don’t make it.”

So far the couple says the renovation is proving positive, with guest traffic consistently increasing at dinner, a daypart that had long languished at Tart.

There may be more changes to come, but Peter says they’re in no rush. “One of the things I learned: take your time, get it right,” he said.