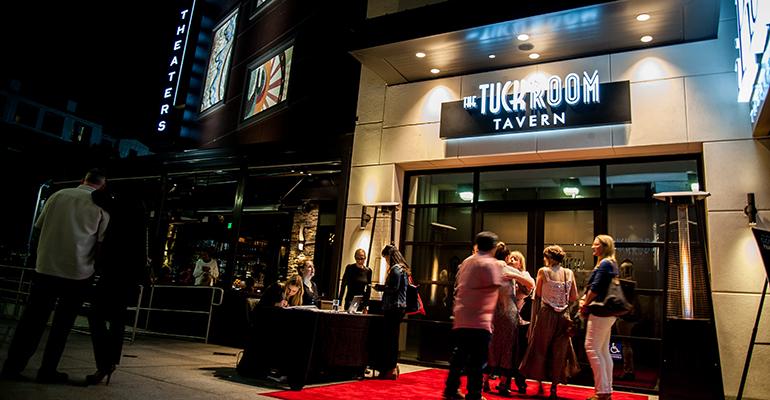 <p>Tuck Room Taverns are paired with movie theaters but designed to be destinations in their own right.</p>
Trends>New Restaurant Concepts

Sherry Yard spent two decades as the James Beard Award-winning pastry chef of Spago in Beverly Hills, CA. But now she is making a name as the creator of new restaurant concepts with an unlikely affiliation: movie theaters.

Yard was hired in 2004 as senior v.p. of culinary brand development for the iPic movie chain, based in Boca Raton, FL. The luxury theater concept is known for full “dining in the dark” food and beverage menus.

Tucked into the theaters, but separate from the screen rooms, however, are also restaurants that serve as destination spots in their own right. The latest of these is Tuck Room Tavern, which opened in Los Angeles last month.

Tuck Room Tavern is the third concept Yard has developed for the 14-unit theater chain. It follows the restaurants City Perch in Bethesda, MD, and two Tuck Room locations in Houston and Miami. The first two are a bit different from the expanded Tuck Room Tavern concept in Los Angeles, which has a greater emphasis on food.

In fact, notes Yard, each of the restaurants is designed specifically for the local neighborhoods, despite the similar names, though there is some crossover of menu items.

In Los Angeles, for example, Tuck Room Tavern has a touch of whimsy that evokes the board game “Clue,” if it were played in the glamour days of old Hollywood.

Los Angeles is, after all, ground zero for the film industry.

“I stop short of calling it a theme, because to me, it’s just like someone’s home in Hollywood. This is what a home might look like,” she explains.

Overall, the goal is to get people to stop taking life so seriously and have a little fun, she says. “Our guests love good food, but they work hard and they play hard, and they want to have a great night.”

Banquettes, for example, are leather and emerald velvet under crystal chandeliers. A “parlor” room with shadow box tables is decorated with carefully curated knickknacks, like a giant eight ball. A “den” is more intimate with a top-hat-wearing elephant painted on a wall of books, and the patio plays the role of “conservatory.”

On the menu is what Yard describes as craveable American fare, the sort of thing she likes to eat.

Dishes include bite-sized Reuben Croquettes and Brioche-Crusted Crab Cakes; or the Drunken Goat Turkey Burger with green harissa, Greek yogurt dressing, pickled cucumber and wild arugula; and a roasted chicken and faro salad with haricots vert and English cucumber. A recent special of chicken liver mousse with cherry gelée was an instant hit, she says.

And, of course, desserts, which are Yard’s specialty, are a highlight, They include Millionaires’ shortbread with coffee caramel, caramel cream and chocolate glaze; as well as the Black n’ Blue Pot Pie with blackberries, blueberries in puff pastry with blackberry crumble ice cream.

Corporate sommelier/executive bartender Adam Seger has designed the beverage program with hand-crafted cocktails made with house-made syrups, bitters and infusions, as well as ice hand-carved from a 45-pound block.

Meanwhile, Yard says her passion project is scheduled to come to Los Angeles next year and has been four years in the making: Yard is designing a 10,000-square-foot food hall at the Helms Bakery in Culver City, a former-bakery-turned-furniture/design hub.

Yard wanted to put in a basement, to allow room for storage and staff, so the build out has taken longer than expected.

Once the space is ready, however, Yard predicts the rest will move along quickly.

“We’ve got a team of people waiting for me to pull the trigger, but we’re still on target for spring next year,” she says.