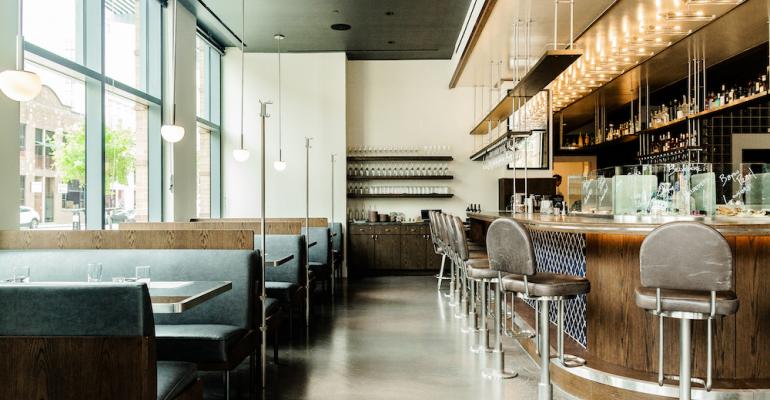 Mashama Bailey and Johno Morisano are the co-founders of Grey Spaces, the restaurant group behind The Grey, which opened in Savannah, Ga., in 2014. They transformed a formerly segregated 1938 Greyhound Bus terminal into one of America’s most acclaimed restaurants, serving a menu of what they call “port city southern food.” The duo followed that up in 2018 with The Grey Market, a lunch counter that channels New York City’s bodegas, offering fresh food, grocery items and sundries.

Bailey and Morisano’s latest ventures have brought them to Austin, where they’ve just opened two concepts — The Diner Bar and a second Grey Market — on the ground floor of the new Thompson Austin hotel. This is the duo’s first expansion outside of Savannah.

“We’ve been asked in the past to look at different cities, but we were drawn to Austin and its music, art and youthful energy. It doesn’t feel dissimilar to Savannah,” said Morisano. After spending time in Texas’ capital city and exploring its restaurant scene, he and Bailey saw an opportunity to contribute their distinctive style of food to Austin’s dining landscape.

Bailey, the 2019 James Beard Foundation Award winner for best chef in the Southeast and a 2022 Outstanding Chef nominee, appreciates Austin’s connection to the surrounding landscape and access to purveyors and farmers. “It makes food loving folks like us really excited to get into Austin,” she said.

The Grey Market opened in mid-March. It takes inspiration from the flagship Savannah location, acting as a community gathering place where local residents, downtown workers and hotel guests can stop in for counter-service meals, coffee, baked goods, grab-and-go sandwiches and pantry staples like popcorn, pasta and infused vinegars. The space accommodates about 60 diners, with a mix of hot line-facing counter seats, window-facing stools, high-tops and communal tables. The all-day menu ranges from a bacon-egg-and-cheese on a Kaiser roll ($9) to a Low-Country breakfast plate ($17) and a fried chicken sandwich ($18).

The bar anchors the space and serves a selection of oysters paired with vodkas and cocktails, plus bar snacks like fried ugali with macha salsa ($11) and Savannah red rice balls ($15).

Both concepts are reminiscent of their Savannah siblings, but the co-founders didn’t want to create copy-and-paste replicas.

“The exciting thing about Austin is that we are layering on top of what we built in Savannah,” said Bailey. “Our menus there are focused on the foodways of the African-American experience, and Austin offers us the opportunity to explore even more experiences and traditions while using ingredients from local producers.”

Morisano said hospitality is naturally transportable, but as newcomers to Austin they want to embrace and cater to the local community.

“We are wanting to grow and learn; that part of the process is exciting to us,” he said.

For now, Bailey and Morisano are focused on settling into Austin rather than looking ahead at other opportunities.

“There’s a lot of work to do to dial things in,” Morisano said. “We just opened two brand new restaurants that are personal to us. That means there is a lot on our plates. After we digest some of this, we can talk about what’s next.”