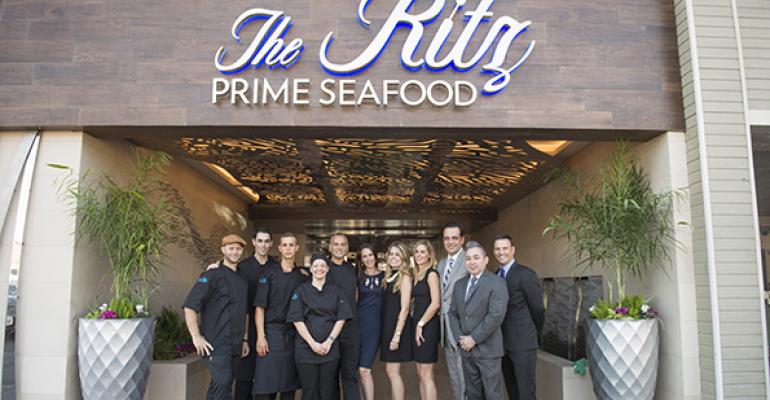 The Ritz, an iconic restaurant that for three decades was the go-to special-event venue for Newport Beach, CA, is back.

At least, a more contemporary reinvention of the brand is back.

Located in a former Chart House restaurant along the Newport Beach waterfront, the new-and-improved version of The Ritz attempts to pay homage to the original while creating a polished seafood brand with 186 seats and floor-to-ceiling windows overlooking the harbor.

“It was just screaming to be a seafood restaurant,” says Bob Spivak, Grill Concepts’ c.e.o.,  who describes The Ritz Prime Seafood as “sort of a cross between Nobu and Mastro’s Ocean Club.”

The original version of The Ritz was founded in 1977 by Hans Prager, a former chef at the L.A. restaurants Lawry’s: The Prime Rib and Scandia.

“Hans was an outstanding chef. And The Ritz was pretty cutting edge in the 1970s, with black-and-red wallpaper and servers—we called them waitresses in those days—in hot pants,” says Spivak. “It had a pretty heavy bar, and it was a large restaurant, with a very big Christmas scene with lots of private dining.”

Prager died in 2004, a few years after selling the restaurant. The Ritz carried on for another decade, but closed in 2014, a victim of changing consumer tastes and a landlord with other plans, according to the Los Angeles Times.

Like many aging concepts, The Ritz was a restaurant whose time had come and gone, Spivak observes.

But he believed the name could be kept alive as something all new that would bring a more-premium seafood brand to Grill Concept’s portfolio, which also includes the high-end Grill on the Alley brand, with seven locations.

Aside from a few steaks, American wagyu short ribs and Jidori chicken, the menu focuses almost entirely on seafood, with a raw bar, sushi and crudo, along with dishes like cioppino; whole branzino; grilled lobster with burgundy truffles and lobster and squid ink pasta.

One holdover from the original concept, however, is the Ritz Egg: a lightly scrambled organic egg served in the shell with smoked salmon caviar, which can also be paired with a chilled shot of vodka.

The dinnerhouse will serve brunch on weekends, with a champagne bar and bloody Marys made tableside. Live piano entertainment will be available six nights a week, said Spivak.

Prices for appetizers are in the $16 to $22 range with entrees around $40. The average check per person is about $90.

In the restaurant, a plaque pays tribute to Prager. Spivak says he feels the late chef would be proud.

“I got to know him well, and my feeling is that The Ritz today is something like what Hans would open if he were doing it in 2015,” he says.