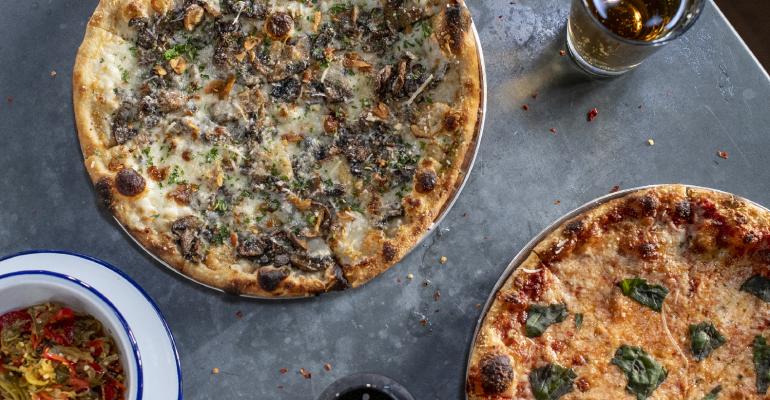 Keith Benjamin and his business partner, executive chef Alec Gropman, attribute much of the success of Uptown Social, and thus their ability to expand, to Anthony Falco.
Trends>New Restaurant Concepts

Owners of Charleston, S.C.’s Uptown Social prepare to expand thanks to the pizza expertise of former Roberta’s pizzaiolo Anthony Falco

Bodega and Share House slated to open this month

Bodega, which debuted as a popup at Uptown Social, riffs on the kind of sandwich you’d find at a New York corner store, such as a bacon, egg and cheese, or lox on a Kaiser roll, only in a larger space with around 110 seats.

Share House, designed to evoke a coastal cantina vibe, will have a capacity of around 130 people and will offer snacks with a slant toward seafood, including shrimp and avocado empanadas, street corn hushpuppies and crab cake sliders on a Hawaiian roll. Both concepts will operate out of an 8,000-square-foot former train depot, and will offer beer and cocktails.

The expansion is thanks to the success of Uptown Social, which had its best year to date in 2021. 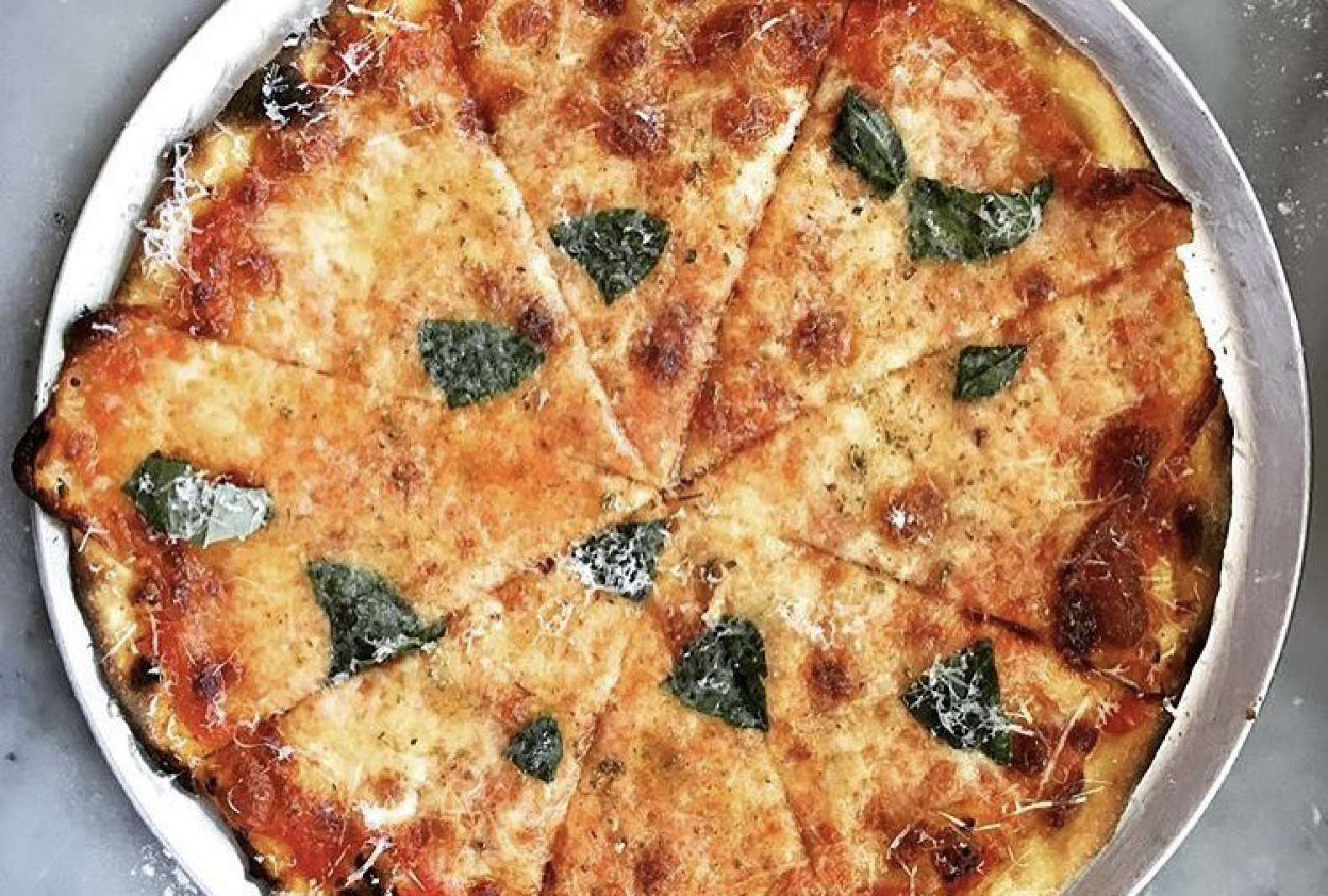 The pizzas at Uptown Social were developed by Anthony Falco, best known as the pizzaiolo of Roberta's in Brooklyn, N.Y.

“The silver lining in this pandemic is that we were given the opportunity to continue to serve, and we needed to do so in a creative fashion to have diners not only feel safe, but feel like they were getting that experience that they were so desperately longing for,” founding partner and director of operations Keith Benjamin said. “And thus, we birthed Bodega in the middle of the pandemic out of Uptown Social, selling New York-style breakfast and lunch sandwiches out of our 10,000-square-foot sports bar, for two reasons. One is because we wanted to build this brand that we would eventually roll into its own space, but two, because we were also able to do so safely by wrapping these sandwiches and having to-go options where people might not feel comfortable eating in the restaurant. We also launched an outdoor cafe with 92 seats, which the city allowed us to open in June of 2020.”

Benjamin and his business partner, executive chef Alec Gropman, attribute much of the success of Uptown Social, and thus their ability to expand, to Anthony Falco.

The former “pizza czar” of the famed Roberta’s in Brooklyn, N.Y., has been associated with Uptown Hospitality since the beginning of his career as a consultant. He has spent the past five years traveling the world as a consultant, advising diverse venues on all things pizza — from the actual baking of it to kitchen design to marketing. Uptown Social was just the second or third contract he took on as a consultant, and in the ensuing years each has proven foundational to the other’s success. 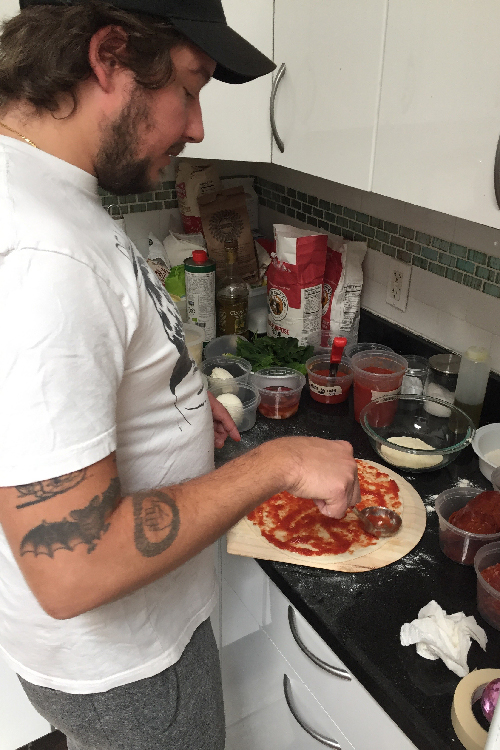 “They were there from the beginning of this crazy adventure of mine,” Falco said. “I owe them a lot just for taking a chance on me back then.”

In turn, the pizza menu at Uptown Social, fashioned after the North Jersey slices Benjamin grew up eating, remains a large draw. Last year the bar sold more than 25,000 pizzas.

Falco’s insistence on sourdough as the proper bread for most pizza crusts has had cascading effects on Uptown Hospitality as well.

“I would definitely say his gifting us his sourdough starter has been absolutely life-changing and has opened up so many doors for us in the ways that we can really make not just really good bread, but in my opinion, the best bread,” Gropman said. “And that is the foundation for really everything about our concepts right now.”

Falco believes that a chef looking to create a pizza menu must perfect their dough before they can even think about cheese, sauce and toppings. True to his philosophy of pizza, he flies with a bag of sourdough starter to all of his consulting jobs. To him, the lactic acid created as sourdough leavens, often absent from bread made with conventional yeast, is indispensable to pizza crusts.

“The lactic acid is what gives it a really deep, savory flavor. Without that lactic acid, at least to my palate, it comes across as flat,” Falco said.

That would be the first of many lessons Falco imparted to Benjamin, and later to Gropman, as they prepared to launch Uptown Social.

Benjamin met Falco in 2016 at a party at another legendary Brooklyn pizzeria, Di Fara Pizza. At the time, Benjamin was based out of New York City, but he was seized by the idea of serving North Jersey-style pizza in Charleston. The problem was he didn’t know how to make it. Benjamin was introduced to Falco at the party and pitched his vision to him. By late 2016 they were baking thin and crispy pies together in Falco’s apartment in the Brooklyn neighborhood of Williamsburg.

“With all my clients now, this is the first conversation I like to have: Why do you want to have a pizzeria? Why do you want to sell pizza?” Falco said. “And Keith’s answer is the correct answer, which is, ‘because I love it, and it's my favorite food.’ And so when you have that kind of passion — and then he had a passion for a very specific pizza, which was this thin and crispy pizza — I was like, ‘O.K., this is cool.’” 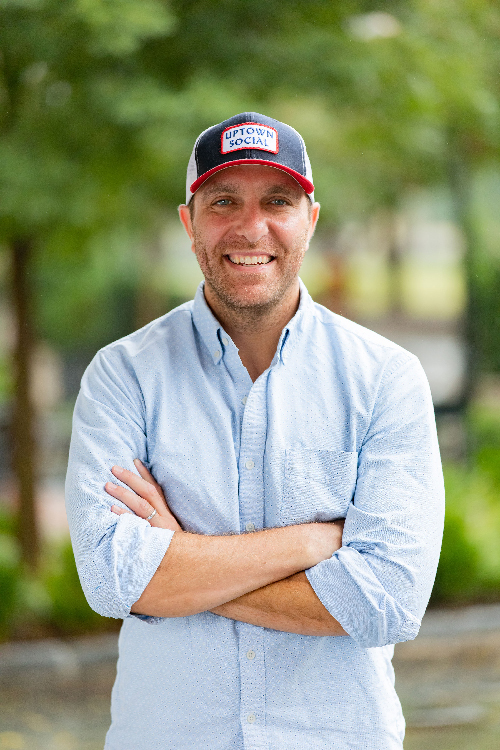 Benjamin sent Falco to Star Tavern in Orange, N.J., to give him a taste of the kind of pizza he had in mind. Thoroughly impressed, Falco returned to Brooklyn ready to experiment with his approach to that style. Through 2017, Falco taught Benjamin and operating partner Kara Graves how to make pizza in his apartment, even as he taught himself several techniques that would become staples of his career as an international pizza consultant.

“That's also where I first figured out how to kind of trick out my oven to mimic a New York-style deck oven,” Falco said. “I put a custom baking steel on the top and then a bunch of stones on the bottom with another steel to create this sandwich of heat, which was how a Marsal oven, which is what we ended up using at Uptown Social, works.”

Then in February 2018, Falco went to Charleston to work with Gropman and the rest of the Uptown Social team. Because the bar’s kitchen hadn’t yet received regulatory approval, they found themselves once again working out of a home kitchen — this time Benjamin’s — to develop Uptown Social’s menu. In order to bake the actual pizzas, Benjamin, Graves, Gropman and Falco asked other local pizzerias for permission to use their ovens. In what Falco sees as a testament to the characteristic camaraderie of the pizza community, the Uptown Social team were allowed to develop their recipes using the deck ovens at Andolini’s and the Rotoflex oven at D’Allesandro’s.

​“We're like, ‘Hey, we promise we're not here to steal your business, but can we do some R & D in your kitchens, please?’ And sure enough, they were super cool,” Benjamin said.

The menu reads like a classic Northeastern pizzeria’s, filtered through Falco’s and Gropman’s taste in ingredients, with one twist: The Orchard, a shrimp pizza in white wine lemon cream, pays homage to Charleston’s local seafood scene.

The pizzas at Uptown Social were designed not to be too filling. Because the bar setting encourages guests to stay for much longer than a typical dinner at a pizzeria, Benjamin didn’t want the pizza to make customers feel weighed down. Falco credits this effect largely to the use of sourdough in the crust.

Before long, Falco had trained Gropman, a graduate of the Culinary Institute of America in Hyde Park, N.Y., in his methods and thinking about pizza. They continue to bounce ideas off each other to this day. 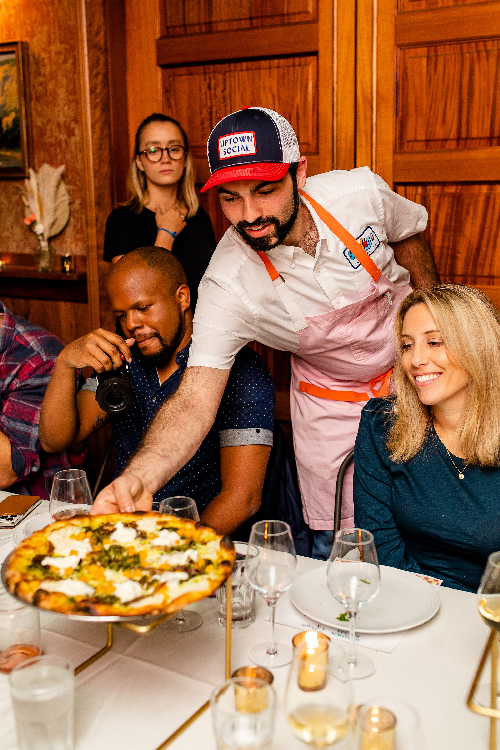 “We speak the same language now,” Falco said. “It's a pretty simple kind of philosophy: Use good ingredients, try not to reinvent the wheel, riff on classic things that people like. What you guys [Benjamin and Gropman] have done with Bodega, that's what I would do if I was going to do something in that vein. You're just taking classic, simple things, but doing them the best possible way. … There's no reason to go crazy when the simple things in life are really the best things.”

Falco returned to Charleston for 10 days surrounding Uptown Social’s opening on April 5, 2018. He’s been back one other time, to help them roll out a Pizza Hut-inspired butter-crust pizza in 2019. As Uptown Social and Falco’s career as a consultant have blossomed, Falco and the Uptown Hospitality team have remained friends.

“Uptown was just a special client,” Falco said. “We've stayed in touch because I just genuinely love these guys. They're just really, really good guys. And I always want to, if my schedule allows it, come down to Charleston and do fun events with them. And if they ever need anything, they know they can always hit me up, because at this point, it's way more than just a business relationship.”

Falco has since worked with clients in South America, Asia and across the United States, and he recently published a cookbook, several of whose recipes originated during his time working with Uptown Social.

The partners at Uptown Hospitality, for their own part, plan to expand even beyond the two upcoming concepts. Although they do not seem to have in mind a dedicated pizzeria, Falco’s pizza menu will remain a cornerstone of whatever comes next.

“Uptown Social will be forever synonymous with our pizza program. And what's really cool now is that Alec has truly perfected the process,” Benjamin said. “Where Uptown Social goes, pizza will go with it. Now we have Bodega and Share House in the fold, which are certainly different concepts. But that pizza is really popular, and the numbers speak for themselves. So we truly believe that if we're going to open a 10-, 15-, 20,000-square-foot spot — we have plans to expand — you know, pizza is pizza. And like we talked about, it's as cool as ever. So it only makes sense for us to continue to keep that item as our focal point.”