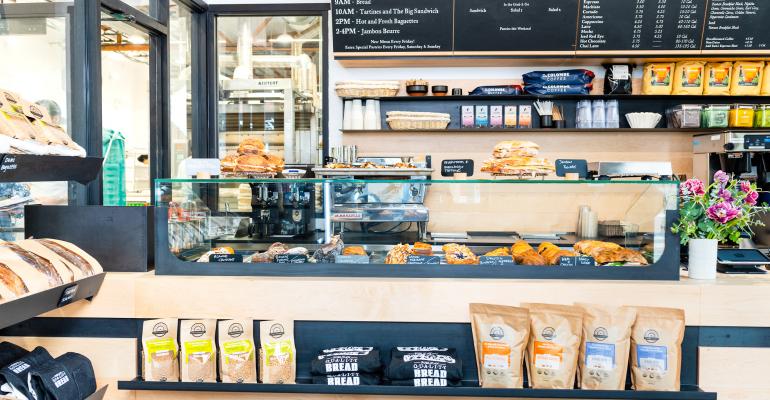 Chicago’s One Off Hospitality Group is expanding its bakery operation and taking it direct to consumers.

“We opened Publican Quality Bread at our first place in 2014, which was on Lake and Halstead,” said Greg Wade, winner of the 2019 James Beard Award for Outstanding Baker, and managing partner of Publican Quality Bread. “With the opening of this new, West Town [neighborhood] bakery, all wholesale and retail operations are now at 1759 W. Grand.”

The move more than doubled the previous square footage and production capabilities, including about 200-square-feet dedicated to the new retail area and coffee bar.

“We carry flour that we use in the bakery-organic, stone milled, and other types that include rye flour, which are more flavorful and better for us,” Wade said. “We’re partnered with Spence Farm and we talk about what sort of grains and volume we want, with [owners] Marty and Will Travis.”

Wade was also a founding member of the Artisan Grain Collaborative, formed to improve the Midwest’s regenerative grain system. The collaborative group includes farmers and millers to distillers and bakers.

Publican Quality Bread retail offerings reflect these values. “We want things to be familiar and recognizable, but enhanced, or a better version of these items. We’re applying the Publican ethos of sourcing ingredients. Our chocolate chip cookie includes stone-ground whole wheat flour and our eggs and blueberries come from [nearby] farms. Sourcing, and baking techniques, make our products special.

“What we’re baking in-house, we bake every morning and it’s right out of the oven,” he continued. “We are enhancing our program with retail-only items and a designated baker for those. We will make challah every Friday and other specialty loaves will only be in our retail.”

After baking bread for 14 to 15 years, Wade said the process resembles gaining expertise in martial arts.

“It’s a practice. You do it multiple times per week and you can keep getting better, but the way you do it is always going to change,” he said. “It’s a craft that you have to be completely plugged in to, to be successful. Every stage of it is enjoyable from milling your flour to letting the dough ferment, and the tactile sense of it to the smell of baking bread.”

Wade first learned about making bread with his mother and grandmother, while growing up in Milwaukee. He later studied through the Illinois Institute of Art’s Culinary Program. Wade then honed his skills at Taxim, in Wicker Park, as well as for Girl & the Goat, Little Goat and Little Goat French Market.

He has focused on growing the Publican Quality Bread concept into a thriving wholesale program, since 2014. It works with many Chicago restaurants that want to serve top quality bread but lack sufficient time or staff expertise to fulfill that desire.

Expanding Publican Quality Bread to include retail, provides additional satisfaction for Wade and his staff.

“There’s this thing that happens, where it’s rewarding to see people are enjoying the food that you make. Especially for people doing production every day, it’s being able to tie it all together,” said Wade. “It gives more purpose to what you’re doing.”

But the company is in no hurry to expand its new retail concept, “We’re going to get our feet beneath us here, and then we’ll see what happens,” Wade said.