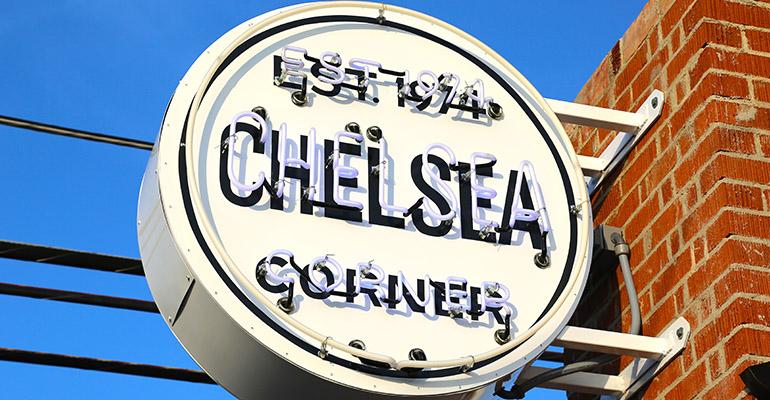 How they brought back a 43-year-old Dallas neighborhood spot

The owner and creative team behind Dallas’ Chelsea Corner have resuscitated a neighborhood spot that, after closing for several years, sprung back in December after first opening 43 years ago, enduring a move 15 years ago and then spending several years off the dining scene.

“This neighborhood was really looking for something that was fun and a little bit upscale,” said Len Critcher, Chelsea Corner owner and driving force behind the revival. “It’s a bar with great food and a neighborhood vibe.”

The 180-seat spot, which first opened in 1974 and welcomed back customers with fresh surroundings in December, now features state-of-the-art technology, completely renovated décor and a menu from noted local chef Kent Rathbun. Critcher said he’d long been friends with Rathbun, and brought him and his wife, Shensei restaurant co-owner Tracy Rathbun, to oversee food and front-of-house operations.

“Anytime you do a revival, you want to pay homage to what the original was,” said Chris Camillo, an investor in the project and longtime friend of Critcher. “Chelsea Corner was a lot of different things to a lot of different people. There was a real diversity of people coming in here.”

Camillo, who like Critcher worked at the original Chelsea Corner in the 1990s, said the demographic ranges from 20s singles to neighborhood stalwarts in their 60s and 70s. With the idea of paying homage to the past, the year-long reconstruction of Chelsea Corner had to modernize both the operations and the menu, Critcher and Camillo said.

“You have to be relevant to today,” Camillo said in an interview on Chelsea Corner’s now-enclosed patio. “We stayed with the rule that every decision we made was on whether it would be as relevant in 20 years as it is today, be that from process or culture or looks or the food. It has to stay relevant.”

Some things that harken to the past include a floor plan that is familiar to the Chelsea Corner or yore, but modernized to improve traffic flow and to accommodate a modern kitchen and other amenities. “We purposefully decided to go over the top with the bathrooms,” Camillo said. “We have four independent bathrooms women’s restrooms, and the men’s room is updated.”

Critcher, who created and sold a software company in 2011 before undertaking his venture into the bar and restaurant business, said Chelsea Corner’s electronics span lighting, televisions and sound that are operated by touchscreens. He also owns the beverage-only Inwood Tavern in Dallas, located near Tracy Rathbun’s Shinsei Restaurant.

The restaurant serves lunch Friday through Sunday and dinner daily. A brunch menu started in early February, also created by the Rathbuns.

“The goal was always the same,” Tracy Rathbun said, and that was: “to create a menu inspired by the original Chelsea Corner, which includes burgers, pizza, and additional items that are easy to eat when you're sitting with friends at a bar.  Chelsea Corner is definitely a scratch-driven menu that is approachable yet has a chef's twist.”

Pizza, burgers and fish and chips remain the menu mainstays, Critcher said, but other additions play to more modern tastes. He said the team is even considering something like ceviche for a lighter offering to appeal to 21th century culinary tastes. “We were known for great pizza, and we just had one size,” he said. “We wanted to have a basic menu with approachable items. To be a neighborhood place, we needed food that could be eaten two or three times a week.  The pizza had asiago cheese as well as mozzarella. Tastes were different in the 1970s.”

Having seasoned restaurateurs on the creative team also gave Critcher some leverage with the landowner in leasing the space, he said.

“Kent Rathbun has become a dear friend. He’s a minority partner with Tracy,” he said. “I needed someone who knows food. I say surround yourself with the best people you can, and they will make you look really good.” Kent Rathbun oversees the kitchen and menu, and Tracy Rathbun consults on front-of-house operations, a spokeswoman said.

“Bringing them in was critical,” Critcher said. “It helped steer a lot of my decisions so I didn’t make big mistakes, whether it was kitchen design or a menu that made sense.

Critcher said the new Chelsea Corner management also hired some of the employees of the neighborhood spot, called Corner Bar, that had built a following at the location. Those familiar faces helped longtime customers adjust to the new look and menu, he said. “I was deliberate in hiring a few of the bartenders from Corner Bar. One had worked at Corner Bar for 15 years,” he said. “You find those that are good employees and deserved the chance to come back home.”

And Chelsea Corner will be expanding a little more. Critcher said he has purchased land next door to create an outdoor patio now that the former seating area has been enclosed.

Critcher, who had worked in Los Angeles as a filmmaker before returning to Dallas in the late 1990s, said doing a restaurant revival has similarities to making successful movie sequels.

“People want to see a story,” he said. Besides a solid structure, he said, “You have to cast it well. I cast it with the Rathbuns.”

And now the Chelsea Corner team, which has created a neighborhood playground for grownups, is banking on a very long run.