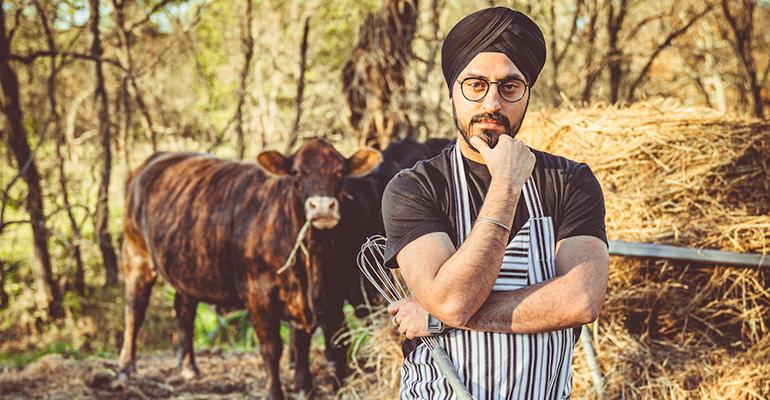 When Kahani Social Group opens its first concept this spring, it promises to deliver more than just a restaurant. Led by brothers Surpreet and Preet Paul Singh, the ambitious group talks about “unique social experiences” and “revolutionary dining adventurers” with such gusto that it’s difficult not to get drawn in — which is fitting, as Kahani translates to “story.”

The Singhs’ hospitality background is anchored in hotels, with experience running multiple properties in Texas, including the Crowne Plaza in The Woodlands and its attached restaurant, Johnny’s Italian Steakhouse. Their new restaurant, Amrina, is located nearby on a waterside stretch of The Woodlands, a comfortable suburb located about 30 minutes north of Downtown Houston.

Amrina means “princess” in Urdu, and the princess theme inspires the restaurant, from the menu to the decor. “The beauty of what we’re doing is that this is not exactly just an Indian restaurant,” the Singhs said in a joint statement. “We are marrying a bunch of different influences, a lot of which have typically come from our ancestral backgrounds. That’s one of the reasons why we chose the name Amrina because it really goes much deeper than just Indian.”

To lead the kitchen, the brothers enlisted Jaspratap “Jassi” Bindra, who will serve as executive chef and managing partner. Bindra left Washington, D.C., for the role. During his time in the nation’s capital, he was the executive chef at Punjab Grill, which received a positive review in The Washington Post and a nod from the Michelin Guide. General manager Giorgio Ferrero, who formerly worked for Smith & Wollensky and Amrina’s Italian neighbor, Sorriso, will oversee the day-to-day operations of the restaurant and run the wine program.

Amrina ​​encompasses a main dining room, cocktail lounge, patio and a 30-foot indoor-outdoor bar, plus private and semi-private dining rooms and a chef’s table located inside the open kitchen, where Bindra will serve guests and guide them through the menu himself. 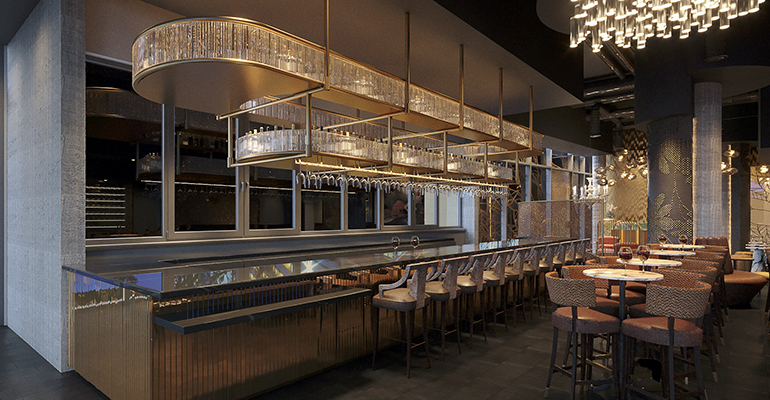 “Amrina is like the first child of the group, so it makes it very special to us,” Bindra said. He teases a menu that blends traditional Indian foods with modern elements and global ingredients to showcase how Indian cuisine has evolved over the years. A tapas bar will serve street food-style dishes, the à la carte menu is focused on comforting favorites — diners can expect new takes on classics like curries and kebabs — and the chef’s table and private dining room will feature tasting menus influenced by royal Indian cuisine. Weekend nights will bring DJs and live entertainment for a higher-energy feel.

“We hope that guests will have a new experience each time they visit,” Bindra said.

The restaurant is awash in warm jewel tones and gold embellishments, including metallic dishware. The uniforms are tailor-made and imported from India.
“Since we were young, hospitality has been ingrained in every aspect of our upbringing,” the Singhs said. “As we continued our growth within the business and began traveling the world, we realized there is a ton of opportunity within the luxury space.” That’s where they hope to make their mark, but they view luxury as more than jewels and gold, saying that their ultimate goal is to provide guests with experiences they can’t find elsewhere.

If all goes well, Amrina will be the first of many restaurants from Kahani Social Group. The Singhs’ goal is to open several more restaurants throughout the United States — they also have their eyes on a few international destinations — always with a different story to tell.

“The next concept will likely be completely unrelated. That’s what makes this brand so much fun.”