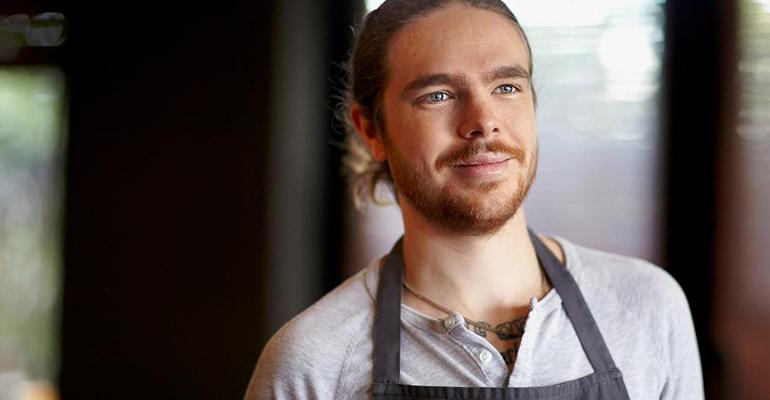 <p>&ldquo;I hate it when I go to a restaurant and someone takes my order and they don&rsquo;t know the menu,&rdquo; says Phillip Frankland Lee.</p>
Trends>New Restaurant Concepts

Chef Phillip Frankland Lee is reinventing his Scratch Bar & Kitchen concept in a new location with a service model that approaches the tipping debate in a different way: no servers.

That’s not to say there won’t be table service at the new-and-improved Scratch Bar.

When the restaurant opens next month in the Encino neighborhood of L.A., Lee plans to have his kitchen staff working the dining room floor.

Designed with an open kitchen, Scratch Bar will have about 20 seats along the concrete counter that also serves as work surface, with cooks plating food right in front of guests in the style of a sushi bar, Lee says.

In the same room, six two-top tables will be available for those who don’t want to sit at the counter. An adjacent space, still awaiting alcohol permits, will have an 18-seat bar and a 40-seat dining room, where kitchen employees will take turns seating guests, running food and being bartender. No one will have the title of “server.”

Lee says he isn’t anti-server. The goal is to ensure that guests have direct contact with the people who know the menu best: the cooks.

“I hate it when I go to a restaurant and someone takes my order and they don’t know the menu,” he explains. “I wanted to have a situation where the only guy you’re talking to is someone in the kitchen cooking.”

Conversely, kitchen staffers working the various front-of-the-house duties will gain experience in the restaurant’s entire operation, rather than being locked into a back-of-the-house biosphere.

“We’ll all get there at the same time, prep together and divide and conquer,” Lee says.

At Scratch Bar there is no need to tip, a policy clearly stated on the menu. Instead, the restaurant will apply an 18-percent service charge that will be distributed to the kitchen staff and allow Lee to pay a decent salary, rather than minimum wage.

“This is a team sport and it’s not two teams. It’s not front of the house versus back of the house. It’s one cohesive unit,” Lee observes. “Those guys should all make money and they should all share whatever the guest wants to give them.”

Lee, who also owns the vegan restaurant Gadarene Swine in nearby Studio City, operated Scratch Bar in Beverly Hills for about three years before it closed in a lease dispute in July.

The Scratch Bar concept, however, was a hit. So Lee decided to reinvent it in the Valley, where he grew up. The emphasis on in-house prepared ingredients—from the bread to the rainbow sprinkles served on house-made ice cream—remains the same.

The kitchen will rely solely on wood-burning heat, an approach Lee calls rustic nouveau. “It’s a new approach to an old sport.”

The menu will include both a la carte and tasting menu options. But the a la carte listings may be minimally described as just “steak” or “salad” or “pork.” How it will be prepared will depend on what the guest likes or feels like that night.

“I want it to be like when you go to your grandma’s house and she says, ‘Are you hungry? What do you feel like?’” he explains. “Or it will be like if your friend owns a restaurant and you get to go hang out in the kitchen with him, and he makes you something good.”

Working with him in the kitchen will be Jonathan Portela, most recently of Eleven Madison Park in New York. Lee’s wife, Margarita, is the pastry chef for both Scratch Bar and Gadarene Swine.

In addition to the new restaurant, Lee is also building a career in television.

The chef is scheduled to compete in an upcoming season of Top Chef, and has competed on shows such as  Chopped, Guy’s Grocery Games and Cutthroat Kitchen.