/sites/all/themes/penton_subtheme_restaurant_hospitality/images/logos/footer.png
Recent
Recent
Restaurant and bar operators share the dos and don’ts of outdoor service
Apr 20, 2021
Flavor of the Week: Rhubarb – the fruity vegetable of spring
Apr 19, 2021
Here’s what the SBA’s Restaurant Revitalization Fund application will look like
Apr 19, 2021
New on the Menu: A morel grilled cheese sandwich and steak with pea leaf croutons
Apr 16, 2021
Paolo Dungca gives Filipino flair to the food at Pogiboy at The Block Foodhall & Bar in Washington, D.C.
Apr 15, 2021
Featured
Chefs on the Move: Sushi Ginza Onodera in New York has a new leader, and the latest jobs for Eli Kaimeh and Kwame Onwuachi
Mar 31, 2021
New on the Menu: Cinnamon Toast Crunch Shrimp and cheddar-stuffed quail
Apr 02, 2021
How one woman is leading an innovative sushi team in Austin
Apr 02, 2021
5 Things: Biden signs PPP extension, Momofuku closes another concept
Apr 05, 2021 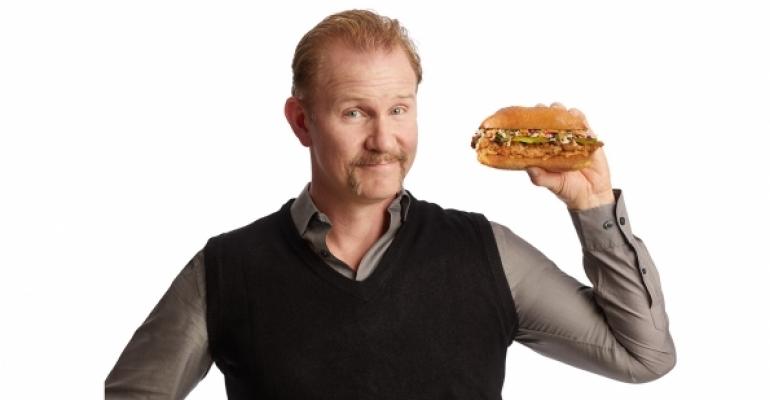 <p>Holy Chicken! will be tested in Ohio this month and is expected to officially debut in January.</p>
Trends>New Restaurant Concepts

Mr. ‘Super Size Me,’ Morgan Spurlock, testing his own restaurant

The quick-service Holy Chicken! follows the In-N-Out model of simplicity

In the 2004 film “Super Size Me,” director Morgan Spurlock ate nothing but McDonald’s food for 30 days to demonstrate the negative effect on his health. Now the Academy Award nominee hopes to show the quick-service segment how to do better.

This month, Spurlock will unveil a test of his quick-service restaurant Holy Chicken! in Columbus, Ohio, serving a simple menu of crispy chicken sandwiches and tenders. The restaurant, which is a converted Wendy’s location, is expected to officially debut in January.

Why Ohio? Spurlock called it “the test market capital of the world.” The idea is to get consumer feedback for investors to get a sense of the brand’s potential before the actual launch, he says.

The chicken is sourced from a farm Spurlock’s company owns in Alabama, where the chickens are cage-free and free-range, and raised without added hormones and antibiotics.

The menu will be rounded out with cole slaw, crispy greens and sodas from a Cleveland beverage company. There will be no French fries.

We recently spoke with Spurlock about the new concept.

Who are you partnering with to run the restaurant?

We have found individuals who have come from the fast-food industry who have come on to advise and guide us along the way, and who will also be here during launch. They don’t want to have their name out in public, but they will be advisors.

“Super Size Me” had a huge impact in sparking consumer demand for higher quality ingredients. How have you seen the restaurant industry change since then?

You’ve seen a push and a trend toward healthier items. You’ve seen a push towards restaurants wanting to give people healthier fare. But the question is, have they been completely open and honest about what that food is, or how it’s sourced and where it comes from? The goal for us with Holy Chicken! is to create an incredibly transparent restaurant. A completely honest experience from start to finish that could be potentially be just as transformative to the fast-food industry.

Where is the chicken from?

The chicken is raised on a farm I have in Alabama. We worked with a grower who grew my chickens, and that’s what’s coming to our restaurant.

The chicken is natural, cage-free, range-free and antibiotic-free, but not organic.

Not organic. We use probiotic feed, but it’s not 100-percent organic feed. Just that one simple thing made it not organic. But turning it organic would be easy; it’s just a different price point. The fact that it’s still all-natural, free-range, cage-free, hormone-free — all the buzzwords. We’re on trend.

The goal is to scale this and grow this out to multiple cities. That is the hope. This farm will supply quite a few restaurants, and it would work well for the East Coast. The idea is that we’d need something else for the West Coast as we go forward.

Is the chicken fried or grilled?

It’s fried chicken, but also grilled, where we’re applying grilled flavoring and texture. You can build the sandwich the way you like, with slaw or crispy greens on the side, and we have chicken tenders for kids.

I believe this idea of creating a simple menu is key to making a place more successful, and, from a consumer standpoint, seeming more healthy and authentic. In-N-Out Burger, for example, does a fantastic job of having such a limited menu. It’s a great model to emulate.

And the beverages are local?

We’re using a beverage supplier from Cleveland that will be making sodas. It’s not national chain sodas. We want to be like everyone else in the industry but with our own personal flair. The sodas have no corn syrup. It’s a better version of something that may not be great for you, but at least better for you.

Holy Chicken! will be located in a former Wendy’s unit.

We’ve basically come in to this dinosaur and we are giving it new life. Moving forward, that would be a great model for us to go in and take these shut-down shells of broken fast-food restaurants and turn them into something people actually want.