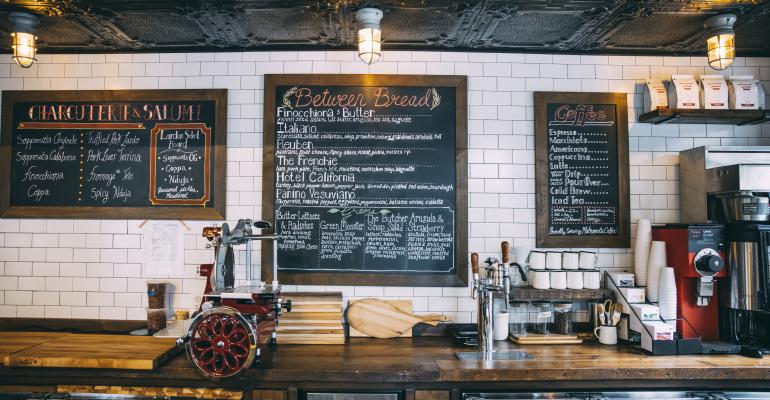 Meadowlark Hospitality, which operates side-by-side concepts Lardon and Union in Chicago’s Logan Square, said it plans to open a 30-seat cocktail bar called The Meadowlark behind the two existing venues this fall. It will be accessible through an unmarked door in the same 110-year-old building.

“We’re still being a little tight-lipped” about the concept, said Steven Lewis, who owns Meadowlark Hospitality with executive chef Chris Thompson. “It’s a cocktail bar, but not a speakeasy. It’s tucked away, with back-alley vibes and no windows. It’s like a cocktail refuge. Our menu will change every few months, establishing ourselves as a proper bar program. We’re still trying to figure out what food will work best.”

Thompson has been cooking in restaurants for more than 20 years, most recently as chef of Coda di Volpe in Chicago.

They began their professional partnership with the opening of Lardon, a café and salumeria, in July 2021 to wide acclaim, earning a loyal following in Logan Square, a neighborhood known for its great restaurants.

With a broad range of menu items, average cost per guest ranges from $15 to $30. Thompson takes a whole-animal approach to the food, incorporating meat from farmers and purveyors throughout the Midwest, while specializing in house-cured items.

“Cured meats were something I thought would be unique and help us stand apart,” Lewis said. “After meeting Chris [Thompson], with some of his experience, we built a curing room and hang cut meats for three to six months.”

“Our customers love it and everything is on display for them.”  Lewis said of the curing room. “It takes a lot of time and investment, but there’s a bit of glamour to it and the fact that we’re doing it onsite. We serve our charcuterie boards all day, with funky wines and aperitivo. It’s welcoming, warm, and relaxing, and our staff is so attentive.”

The 1,200-square-foot concept focuses on local and Midwest/Great Lakes beers.

“I’m looking for something new, unexpected, and delightful, in beers,” said Lewis, who plays an active role in curating the beer list, although he leaves wine selections and cocktails to his beverage team.

The food is more elevated than typical bar food and includes fried stuffed olives with house mortadella, smoked white trout from Idaho and lamb-pistachio meatballs that incorporate Iowa lamb. Premium Berkshire pork chops come from one to two Illinois hogs that arrive each week. Grass-fed steaks are another customer favorite.

“We’re trying to go with a balance between an exciting dining experience mixed with the casualness of beer,” Lewis said. “The cuisine pushes expectations of what bar food is, with small, medium, and large plates.”

Lewis and Thompson both live in Logan Square and opened their restaurants understanding how high the stakes were, and Lewis said they have an advantage because they understand the neighborhood.

“At the root of Meadowlark Hospitality is the connection to the food-and-beverage-heavy neighborhood,” he said. “The bar is set very high when [Logan Square] diners and bar patrons go out. We’re doing what people in our neighborhood really ‘get’ and like and they’re impressed by it. A lot of our staff live and work in the neighborhood too.”

Lewis met Thompson about halfway through the build-out of Lardon. Their one-hour conversation morphed into six hours, which included ‘kicking the tires’ in the building, which had recently undergone a 2-year renovation.

“I think both of us were looking for another opportunity,” Lewis said. “I wanted to start this company that would do things the way I wanted to and build something that’s more deeply rooted in the neighborhood — a venue or a spot with the ability to have more than one concept [under one roof] and to do each thing really well.”

He said Thompson played a key role in developing the concepts.

“Chris has really helped to foster my ideas and bring the project to life,” he said. “We feed off each other and push each other. We’re building a spot that we would want to be a part of, in our neighborhood.”

Lewis said Thompson works really well with his kitchen staff and is exceptionally good at being a coach and a mentor. He appreciates Thompson’s kitchen leadership as well as his keen awareness of front- of-the-house operations.

Like most restaurant owners, Lewis does a bit of everything to keep things running smoothly.

“I tighten all the screws and get my drill out when I need it,” he said. “I was extremely involved in construction and design and am involved with all facets of operations. We’re constantly trying to evolve what we’re doing and stay on trend.”

Lewis said he’s thrilled to run Meadowlark Hospitality with Thompson in Logan Square. “Having a place in this neighborhood is cool,” he said. “We have a home here and are raising our son here. There are so many fun things to do in Logan Square and it’s rather eclectic.

“Giving this 110-year-old property new life was one of the fun things about the project,” he added. “Right now, we’re really focused on doing our best in our current location. We’ll see where the wind blows us. To be creative is what really drives Chris and me.”

This story and headline have been updated to reflect more clearly that The Meadowlark will be a cocktail bar.
TAGS: Midwest
0 comments
Hide comments
Recommended Reading