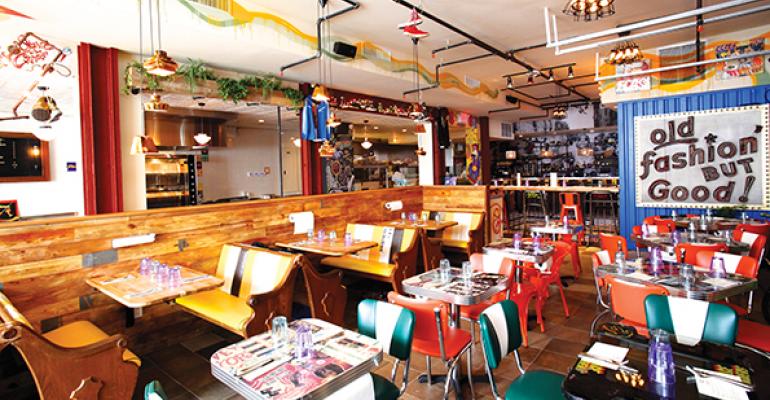 <p>Inspired by classic Harlem diners, a nine-seat counter curves around the back of the restaurant and faces the open kitchen.</p>
Trends>New Restaurant Concepts

James Beard Award-winning chef Marcus Samuelsson took Harlem by storm when he opened Red Rooster in December 2010, naming his new restaurant after a legendary Harlem speakeasy. He installed his own speakeasy of sorts, Ginny’s Supper Club, in the lower level. Two months ago the chef cemented his love for the neighborhood with a new, funky “kitchenette,” just down the street, called Streetbird Rotisserie.

The focus of the 68-seat restaurant is its namesake—rotisserie chicken—adorned with house-made sauces such as Smokey Q, Streetbird Hot Sauce, Sweet Soy, Jamerican (jerk) and Green Cowboy (salsa verde). A quarter-bird runs $5.75, $9 will get you a half and $14.50 will make you a full owner.

A salad called The Fly Girl ($8) arrives with black kale, romaine, green beans, toasted rice and lime-coconut dressing. Noodles and rice are also available and include Sho’ Nuff ($9) with stir-fried noodles, cabbage, scallions and a choice of chicken, shrimp or tofu. The Bird and Bread section of the menu features dishes such as C. Chavez ($6), a house-made, fermented tortilla with “ripped” rotisserie chicken, mole, picked red onions, lettuce and cilantro.

The space celebrates urban art and the community’s soul, especially the hip-hop and graffiti culture of the late ’70s to early ’90s. The neighborhood cookout feel gets help from graffiti created by artist Cey Adams, the founding creative director of Def Jam. Anthony Vasques (aka AVONE) created a floor collage in Streetbird’s entrance with vintage images of various Harlem eateries and street life. Acclaimed photographer Janette Beckman installed vintage photographs, including one of Run DMC and another of a Coney Island hip-hop concert in 1986.

When the weather is right, garage doors will open to the sidewalk, where the interior scene will be on full view. Who wouldn’t want to join this bash?