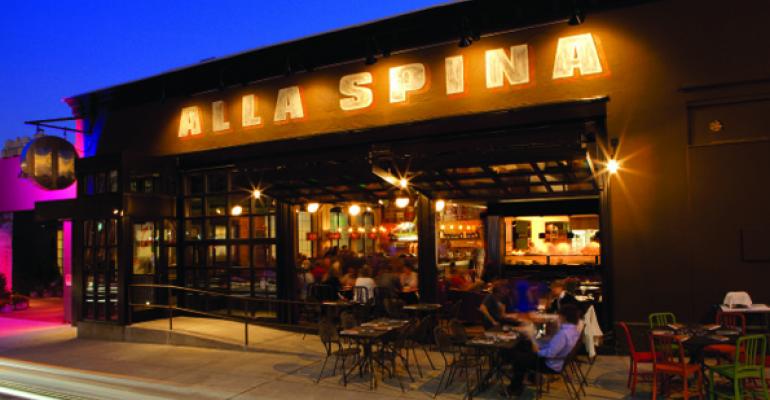 How competitive have gastropubs become? Not long ago, offering a few dozen obscure beers and tweaking a pub grub menu until it could be called “chef-driven” was enough to get by. But now? Consider the new Alla Spina in Philadelphia. The chef driving its menu is the much-honored Marc Vetri, and his Italian spin on the gastropub format is setting a new standard for this segment.

Alla Spina (Italian translation: “from the tap”) is a much-funkier venture than the three other Philadelphia restaurants Vetri and his partners operate under the Vetri Family umbrella. Their portfolio includes fine-dining flagship Vetri Ristorante; Osteria, a high-end casual Italian spot; and rustic Italian trattoria Amis.

Alla Spina is housed in a 3,000 sq.-ft. space where customers of the Wilkie Buick dealership once took ailing vehicles for service. The Vetri gang cleaned it up, but Alla Spina’s interior still embraces its industrial roots. Designer Michael Gruber chose to feature the space’s exposed brick walls, concrete floor, riveted steel trusses and scorched wood ceiling. Huge street-style graffiti murals sprayed on the walls by local artist David “Distort” Sol contribute to the garage feel. It’s all meant to create a vibe that makes customers feel like they should have a beer. 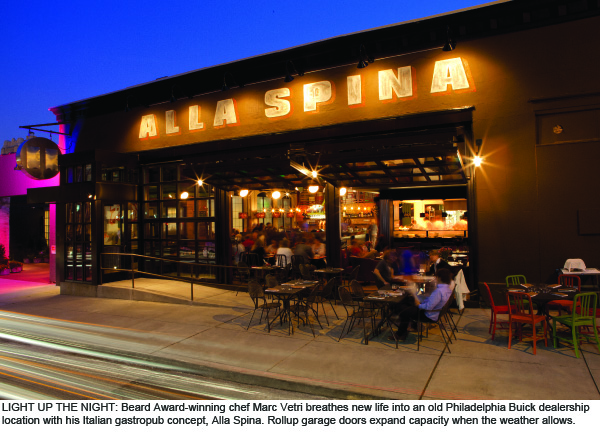 Or rather, have a beer experience, which is what they’re peddling at Alla Spina. Positioned within the dining area’s 45-foot horseshoe-shaped bar, almost shrine like, is a custom-made copper beer tower that houses 20 seasonal craft beers on tap. It’s an eclectic mix of beer choices, including domestic, local and off-the-beaten-path Italian brews. A 50-label bottled beer list provides further options.

A lot of bars and restaurants have lengthy beer lists that are far-ranging and exotic these days. What they don’t have is a menu conjured up by Vetri, the 2005 James Beard Award Best Chef Mid-Atlantic, and his business partner Jeff Michaud, who won the same honor in 2010. This group’s flagship concept, the tasting menu-only Vetri, was a finalist for the “Outstanding Restaurant” in the 2012 Beard Awards just last month.

Now bargain hunters who want to sample Marc Vetri’s cooking can avoid the $135 tab at Vetri by heading to Alla Spina. There they can get a mortadella hot dog with spicy pickles and cabbage relish for $8 and wash it down with a 10 oz. glass of  Dockstreet Dude de Garde, a Philadelphia artisan beer, for $5. As value propositions go, Alla Spina’s hard to beat. 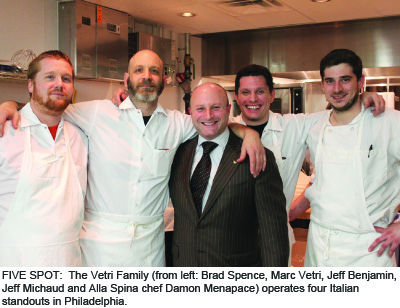 Marrow bones with radish and parsley ($14) and razor clams with salsa verde ($15) top the plancha section, while the panini lineup includes a swordfish BLT with basil and guanciale ($14); and a veal breast Milanese hoagie with bacon maionese ($12).

The food is accessible to customers, and it definitely pairs well with the many beers featured at Alla Spina. But it’s also sophisticated and imaginative in a way that other chef-driven gastropubs will be hard-pressed to match. If you’re thinking about going the gastropub route for your next expansion project, take a lesson from, but don’t go head-to-head against, Marc Vetri and crew in Philadelphia.