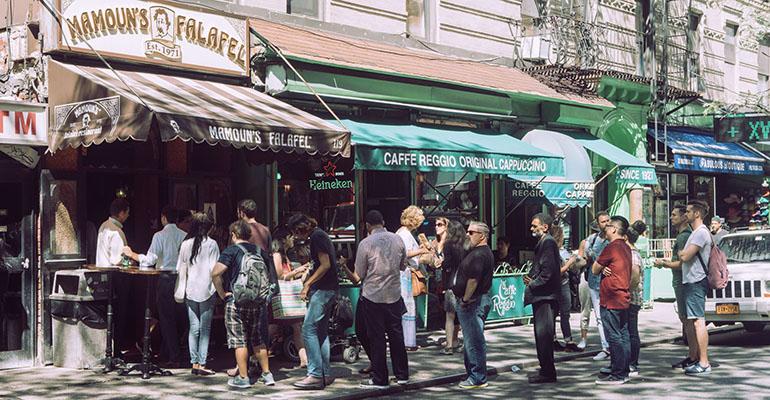 The iconic Mamoun’s Falafel chain, based in New York, is franchising with plans to open in Dallas this fall.

Operated by Ghassani Bros, LLC, the inaugural franchised unit in Dallas will also be the cult-favorite falafel brand’s first outside of the greater New York area.

The Ghassani team have signed a multi-year deal that spans the Dallas-Fort Worth area, so more Texas locations are slated to open in the future.

“The evolving and eclectic restaurant scene made Dallas the perfect market for Mamoun’s to begin our franchising efforts,” said Hussam Chater, co-owner and CEO of the fast-casual Mamoun’s. “In addition, our Dallas franchisee was diligent in pursuing a site and getting it developed.”

Mamoun’s was launched in 1971 by Chater’s father Mamoun Chater, who built the menu around Syrian recipes for traditional Middle Eastern dishes like shawarma, hummus, kebabs and baklava, as well as falafel.

Menus vary slightly by location but common price points include $7 for a meat combo sandwich, $2 for a side of three falafel balls and $7.50 for a veggie combo platter.

On average, customers spend between $9 and $15, depending on location. Chater said the typical spend in New York City skews lower than the suburbs as those customers tend to grab quick items on-the-go instead of larger meals. The original New York store in Greenwich Village, for example, has no seating, while a larger shop in Princeton, N.J. can seat about 40 customers.

As for the coming franchise locations, the seating will depend on the market. The footprint ranges from 800- to 1,500-square feet.

The chain is working with Fransmart to develop the franchising program with the goal of taking the concept across the U.S.

“We’ve begun development on franchise locations in the Old City District of Philadelphia, Long Island, N.Y., and Fort Lee, N.J.  All of these are on the immediate horizon and expected in late 2017, early 2018,” Chater said.

He added that more locations are on the way in Atlanta and San Jose, Calif., but sites for those restaurants have yet to be found.

Mammon's uses a commissary model for the company owned locations and this practice will extend to the franchised restaurants.

The new franchised locations, as well as the six existing units, will be adopting sous-vide techniques to make it easier for franchisees to replicate the recipes consistently, Chater said.