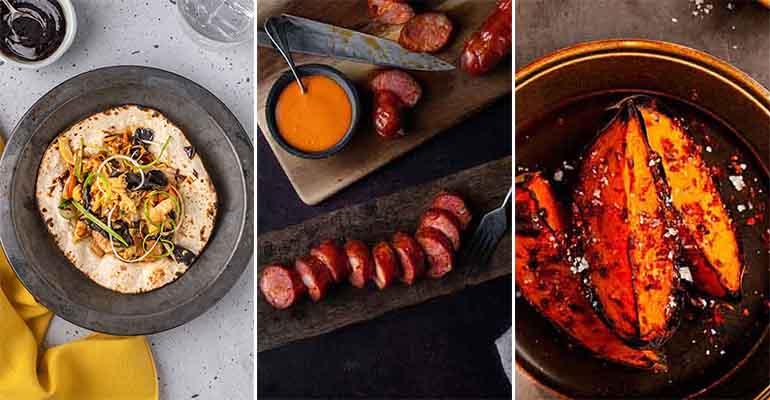 Start Slideshow ›
With chef Chris Scott, Becker is also planning a brick-and-mortar food hall in Harlem this summer as well

Becker is co-founder and former head of culinary development of grocery delivery service HungryRoot, as well as a co-founding investor in The Little Beet chain when he was culinary director for Aurify Brands. He was also on Bravo TV’s “Top Chef Masters,” and now he is CEO of F. Becker Hospitality, the entity behind the new concepts.

Each concept represents a different part of the world where Becker has traveled, according to the company. Galinha is a Portuguese concept highlighting grilled chicken; Universal Taco offers tortillas filled with global ingredients like Peking duck, chicken shawarma, and Baja-style shrimp; and Shai — an outpost of Becker’s virtual restaurant in Philadelphia launched in November 2020 — is focused on Israeli food, like chickpea stew, parsley salad, and falafel.

Becker and Scott are also planning to open a brick-and-mortar food hall on the Columbia University campus in Harlem this summer, with a location of Butterfunk Biscuits, along with others from the mix of virtual brands and more new concepts. Scott will eventually split his time between the virtual and brick-and-mortar locations as chef he told Restaurant Hospitality last month.

Aurify Brands, of which Becker was the culinary director, purchased Le Pain Quotidien in June 2020 and also includes concepts The Little Beet, Melt Shop, Fields Good Chicken, and The Little Beet Table. Becker is no longer involved in day-to-day operations for The Little Beet but remains a shareholder in the concept.

Click through the gallery to learn more about each of the four concepts.