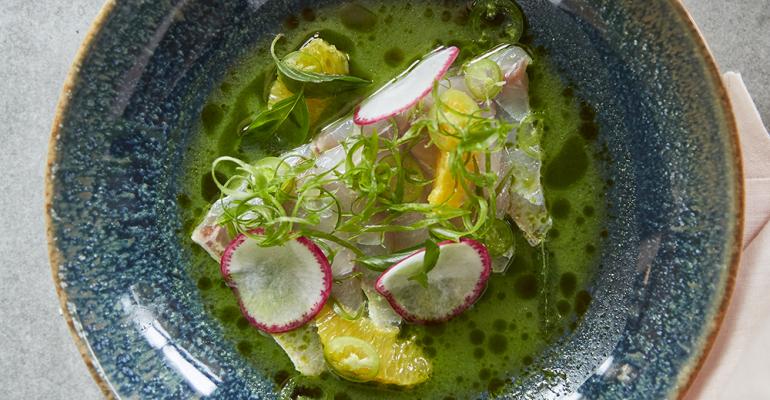 Start Slideshow ›
The California-meets-steakhouse menu is inspired by the founders’ travels; they currently have no plans for expansion

Located in the Playa Vista neighborhood, the indoor/outdoor restaurant was inspired by the Jackson’s time spent living on and traveling around West Coast ranching locales from Paso Robles, Calif. to Guadalupe Valley, Mexico.

The name Bull & Butterfly represents “our business relationship and our family relationship in that our roles are sort of interchangeable,” Alan Jackson told Restaurant Hospitality last year upon the restaurant’s announcement. “Who’s the bull and who’s the butterfly […] The ‘wink wink’ is that, generally, I’m probably a little more the butterfly.”

Headed by executive chef Robbie Nowlin, previously of Otium in Los Angeles, the menu is a combination of California cooking across traditional steakhouse elements and a “snout-to-tail” cooking philosophy. Though the menu was crafted in partnership with the Jacksons’ longtime friend, L.A.-based chef Ben Ford, he is no longer involved in the project.

Vegetable and meats will be cooked in a big wood stone grill and a Josper from Spain in the restaurant’s open kitchen.

But it hasn’t all been a dream for the couple’s “dream restaurant.”

Bull & Butterfly was originally set to open in fall 2019, but delays with the buildout pushed the opening date into winter, something Alan Jackson knew wouldn’t be good timing for a new restaurant, so the Jacksons eventually decided on a spring 2020 opening.

And then “boom, the pandemic hit. As stressed out as we were, in hindsight these challenges ultimately may have saved us from a whole other series of heartaches: being a newly open restaurant and having to shut down like all our brave colleagues,” Jackson said.

This stalled building for months, the restaurant an open construction site until June when crews in California resumed their work.

“This might have been the most challenging project out of the 35 restaurants we have ever personally opened,” Jackson said. “[The pandemic] gave us the time and leisure to refine our operations manuals, as well as develop and improve our culture mission and training manuals.”

But, in spite of these challenges, including hiring management staff prior to the shutdown, Bull & Butterfly was able to retain those staff members who hadn’t started their jobs in person.

Don’t expect Bull & Butterfly to go the way of the founders’ original concept, Lemonade. Jackson and his wife have no plans to change this business model.

“While many of our colleagues have followed suit in moving from high-end dining to fast-casual restaurants like Lemonade, we believe it is now time for us to put our energy into a more culinary-focused dining experience that is approachable and easy to visit often,” said Jackson.

Lemonade, with about 30 units at the time, merged with Modern Market Eatery in 2019. The combined concept now has over 60 units.

Click through the gallery to get a closer look at Bull & Butterfly.