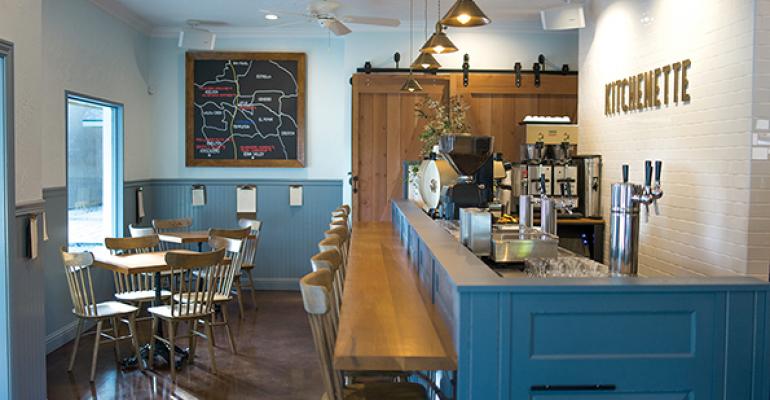 Brothers Chris and Mike Kobayashi were fulfilling a dream when they opened their restaurant Artisan in 2006 in Paso Robles, CA, in the heart of central coast wine country.

Now the brothers are expanding with their second venture, Kitchenette, which opened recently in Templeton, about three miles down the road.

With Kitchenette, the Kobayashis are exercising their love of breakfast, lunch and brunch. “We’ve always wanted to open a breakfast and lunch place. We’re big fans of breakfast,” says Mike.

The “new American” menu is designed to please an interesting mix of wine makers and “cowboys” in the largely agricultural community, Mike says.

Like Artisan, the menu features mostly locally sourced and organic ingredients. Some of that food comes from their own farm, located less than a mile away, where they grow tomatoes, squash, herbs and lettuces.

On the menu at breakfast are dishes like a fried egg BLT with avocado, made with nitrite-free bacon, arugula and white cheddar; yellow corn grits with linguica, braised kale, tomato and soft-poached egg; or cinnamon brioche French toast with crème fraiche, Meyer lemon curd and preserves.

And the menu includes home-style desserts, like a brownie ice cream sundae or seasonal pies. A signature dish is Churros and Chocolate.

Menu prices range from about $9 to $12 for entrees.

Even though Kitchenette doesn’t serve dinner, the menu includes beer and wine on draft, as well as cider and a line of specialty and espresso coffees, including cold-pressed coffee.

Chris is the chef in the family, and has received nominations for Best Chef Pacific by the James Beard Foundation. He also has competed on two reality culinary shows: Knife Fight in 2013 and Beat Bobby Flay in 2014.

Mike, who describes himself as the older, “but more immature” brother, comes from the music industry. He is currently the manager of the band Def Leppard.

“We’re two different personalities,” he says. “Chris is so methodical. He’s the chef. I’m the emotion, the one who greets people and pushes and markets us. It’s a good tandem.”

The brothers see Kitchenette as a concept that would be a natural for duplication elsewhere, if things go well.

“If we get this off the ground right, we could do another one in Santa Barbara or San Luis Obispo,” says Mike.