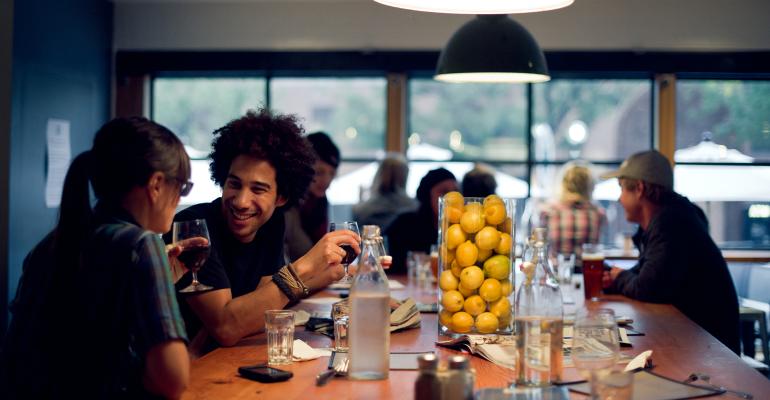 50 units planned by 2020 across American heartland

Musk, a technology entrepreneur, is known for his full-service concept The Kitchen bistros, with locations in Colorado, Tennessee and Chicago, founded with chef Hugo Matheson and Jen Lewin in 2004.

In 2011, the group launched a more casual variation of The Kitchen called Next Door, now with three locations, which Musk plans to expand with the goal of reaching 50 units by 2020.

Next Door has a menu of soups, salads, burgers and daily specials and a full bar with beer and wine on tap, with a price range of about $15 per head.

The concept has also found a balance between dine in and to-go business, including delivery using tech-based third-party services like UberEats, DoorDash and Postmates, said Musk.

“We think we’ve created a new category called urban casual, which is a blend between dine in and digital to go,” he said.

“We have found a real niche with 3,500-square-foot restaurants with good-sized kitchens and about 100 seats,” he said. “Close to 25 percent of our business is to go,” though mostly pick up.

And the to-go business is growing, he added.

“We saw 80-percent growth in to-go last year,” he said. “We designed our entire menu to focus on offering a great in-store dining experience and being an amazing gathering place for Millennials, and enabling folks to recreate the dining experience in their home with really quality to-go products.”

Musk is focusing on America’s heartland states to grow Next Door, in part because it’s good for business. “The people are warm and welcoming,” he said. “The economics are fantastic. The landlords are great to work with. It’s a restaurant owner’s market.”

Concepts like this are plentiful in cities like New York and Los Angeles, said Musk. But in Mid America, there’s a real unmet need for restaurants offering this kind of “real food,” he said.

By “real food,” Musk said he means made-from-scratch menus offering “food you trust to nourish your body, nourish the farmer and nourish the planet.

A member of Chipotle Mexican Grill’s board of directors, Musk has long been a proponent of sourcing sustainable ingredients. He’s also on the board at Tesla Motors and SpaceX, companies founded by his brother Elon Musk.

Consumers are demanding more transparency about the food they eat, and scaling a restaurant concept with direct ties to its suppliers remains a challenge, he said.

“It’s about knowing the farmer or the beef supplier and how that cattle was raised,” he said. “In the industrial food system, there is no trust.”

The Kitchen Restaurants, however, has build a supply chain that allows for the kind of growth Musk has in mind.

It’s not just about having local ingredients, he noted.

“We’re in Colorado and we have to find fish from fishmongers in Seattle or Maine,” said Musk. “But it takes years to build the kind of relationship where we can truly trust the product, and to build that relationship with customers so they trust us to make decisions for them.”

The group looks at suppliers in terms of tiers, he said.

Tier 1 suppliers are physically local with carrots or baked goods coming from the community. Tier 2 includes suppliers that may be some distance away but with whom the group has a close relationship, like La Quercia cured meats in Iowa, for example. Tier 3 includes ingredients “off the back of a truck, like any restaurant might use,” he said.

Next Door is aiming to get 60-percent of ingredients from Tier 1 and 2 suppliers, and 80 percent at The Kitchen, said Musk.

That focus on ingredients is a key differentiator for the group. Most restaurants aren’t willing to take this kind of control over their supply chain simply because it’s hard work, juggling so many suppliers, he said.

The Kitchen restaurants, for example, also uses produce like arugula from vertical farmers using new technologies, like growing fruits and vegetables in shipping containers. Musk is also co-founder of the verticle farming startup Square Roots that creates the equivalent of two growing acres inside a climate-controlled 320-square-foot module.

Six locations of Next Door are scheduled to open over the next six months, he said, including No. 4 in Memphis, which will open in May.

Musk is conducting an equity fundraise to support the planned growth.

He declined to offer specifics on sales at existing units but said the group has seen “phenomenal growth.” Across three locations in Denver, the concept serves about 10,000 guests a week, he said.

Musk said the group employs more than 600 people and has sourced millions of dollars worth of food from American farmers, helping to strengthen local food economies.

“But we’re only getting started,” he said. “We won’t stop until real food becomes the new normal.”