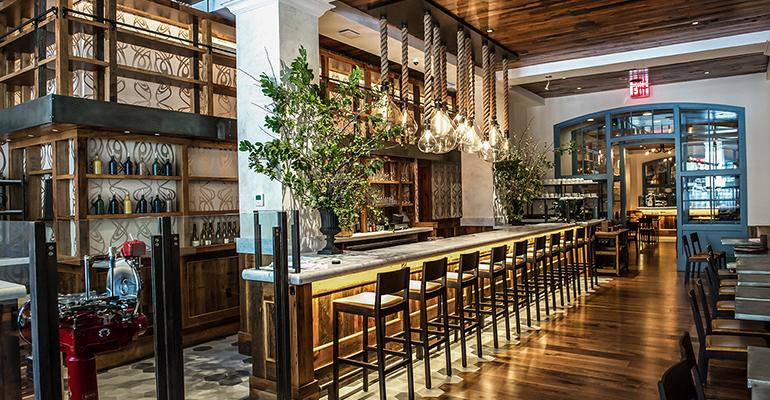 This could be a first: An out-of-town chef who’s never run his own kitchen makes his New York City debut as chef/proprietor of a high-profile restaurant with a coveted location. That’s what Jared Sippel is doing at Italienne, a concept that offers two distinct dining experiences — each with its own menu — under one roof. The setup: a rustic taverna up front, prix fixe fine dining in the back.

Sound like a lot to pull off? Not for Sippel. Early raves indicate guests are wowed by both his food and the options they have to access it. They’re also asking how a chef this talented stayed under the radar so long.

Good question. Sippel’s cuisine at Italienne — the French word for Italian — reflects the food sensibilities of Southern France, particularly Provence, and Northern Italy. It’s not exactly what you’d expect from a guy who paid his way through the University of Iowa by cooking at a local mom and pop.

In 2013, he was back at Frasca as chef de cuisine when a headhunter convinced him to try out for what was perhaps the most coveted job in the restaurant world at the time: head chef of the proposed Italienne’s Four Story Farm poularde is made with cauliflower, Brussels sprouts and bacon.

Manhattan outpost of three-Michelin-star Chef’s Table at Brooklyn Fare. Sippel won the job — quite a coup for someone then cooking for the college crowd and fitness fanatics in Boulder. But the new project never got off the ground. Sippel decided to strike out on his own.

“I’d been here a year eating and sizing up the competition,” Sippel told New York magazine. “I had something to prove to myself.”

He’s doing it with an ambitious concept that pairs a 45-seat neighborhood-style osteria with a 50-seat, tasting-menu-only dining room. That 95-seat total is key. The restaurant is big enough to support a strong and talented staff, but not so large that it can’t deliver personalized hospitality to guests.

The $98 tasting menu provides guests with 22 choices spread across four courses. That alone is enough to keep Italienne’s kitchen humming, but it’s also responsible for the small plate extravaganza served in the taverna. Offerings there include an 11-item seafood-focused cichetti platter, a seven-item salumi lineup, ten cheese selections plus 21 options total on the crostini, fritti, insalati, pasta tradizionale and secondi sections of the menu, many prepared on the taverna’s grill and wood smoker.

The thinking behind this setup: “In Italy, nearly every fine-dining ristorante has a complementary osteria,” says Sippel. “The two share a symbiotic relationship, offering guests a choice of dining experiences, and enabling a chef to cook with as little waste as possible.”

Italienne had to go big or go home because the competition near its Flatiron District location is fierce. Nationally known standouts nearby range from One Madison Park, Danny Meyer’s original Shake Shack and Eataly to dozens of other fine restaurants, a couple of them Michelin stars. The two-restaurants-one-roof model helps Italienne stand out.

So does its hospitality. The many Frasca vets on Italienne’s staff (Sippel, co-proprietor and GM James King, wine director Erica O’Neal, plus several more) learned their service lessons there well. They also developed a deep understanding of the importance of beverage program revenue to restaurant success.

Italienne’s extensive wine list focuses on lesser-known producers from the regions featured in Sippel’s cuisine. Cocktails go for $15 apiece and a digestif cart pays customers a tableside visit at meal’s end. Guests also appreciate details that include everything from French milled hand soap in the bathrooms to complimentary bread from noted purveyor Brooklyn Bread Lab at the table.

Sippel thinks the Italienne concept fills a niche its restaurant-rich neighborhood will embrace. “I think of this as an Old World restaurant that can showcase local ingredients,” he told the New York Times. “Very wine-driven and service-oriented.” It’s a model other other restaurant operators will watch closely.