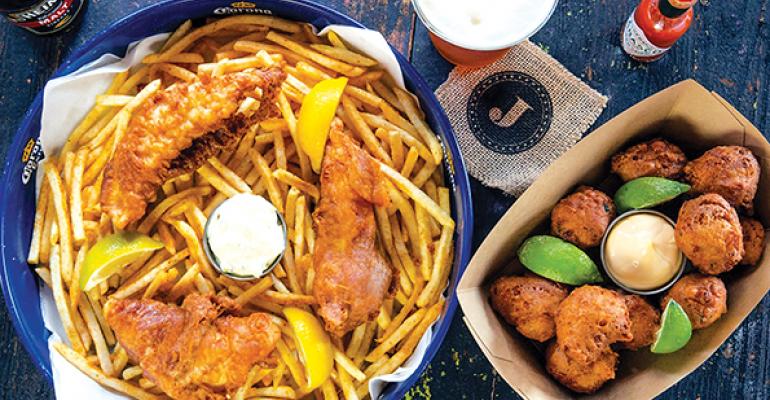 <p>This seafood restaurant is utterly casual and a perfect spot for families to eat fish and chips and hush &ldquo;pups&rdquo;.</p>
Trends>New Restaurant Concepts

We first spotted Jason Dady in 2004 at The Lodge Restaurant of Castle Hills in San Antonio. He was among the first to do a tasting menu in the city and the depth of his culinary talent was astonishing for such a young chef. RH named him a Rising Star that year and he’s more than lived up to the honor.

“Shuck Shack is exactly the kind of place I’d want to go eat with my family and friends, where the adults can kick back and relax with great food and drinks on the patio while the kids play around outside,” says Dady.

The casual seafood eatery offers an approachable menu of fresh raw oysters, Texas-inspired dishes and a beverage list that appeals to those who want beer and wine or a classic cocktail. Located in the city’s Government Hill neighborhood, Shuck Shack features an inviting family-friendly atmosphere with an open kitchen, indoor and outdoor seating and a children’s playground.

The menu takes diners on a trip along the coast with high-quality seafood and Dady’s twist on Texas and Southern favorites, including fresh, raw cold-water oysters and Gulf Coast oysters, as well as a his signature, Baked Gulf Oysters ($16 for a half-dozen and $30 for a dozen). Customers can also order a Texas version of baked oysters with the addition of barbecue sauce and smoked brisket fat.

Under the “Sammies & Crispys” section of the menu are Lobster Rolls ($22 for a half—half tail, 1 claw and 1 knuckle with mayo and celery and $40 for a full—whole tail, 2 claws and 2 knuckles with mayo and celery). Also available is a Shrimp Roll (brown butter, sofrito and horseradish crema—$16), Market Fish & Chips ($24), Market Fish a la Plancha ($22) and Tijuana Dog (a hot dog with bacon, jalapenos and pineapple—$8). All of these are served with seasoned fries.

Shuck Shack was designed to capture the casual, rustic decor of seafood shacks found along the country’s coasts. The bright space features vaulted exposed ceilings, weathered wood slat walls and nautical touches, such as vintage colorful life preservers, fishing nets and anchors. The 1,200-square-foot space features a 40-seat indoor dining room, with 12 more sets at the oyster counter. The outdoor patio deck seats up to 50, with 150 more seats at large picnic tables that surround the playground.

In addition to his five restaurants, Dady also operates The DUK Truck (a roving gourmet food truck) and Jason Dady Catering and Events.