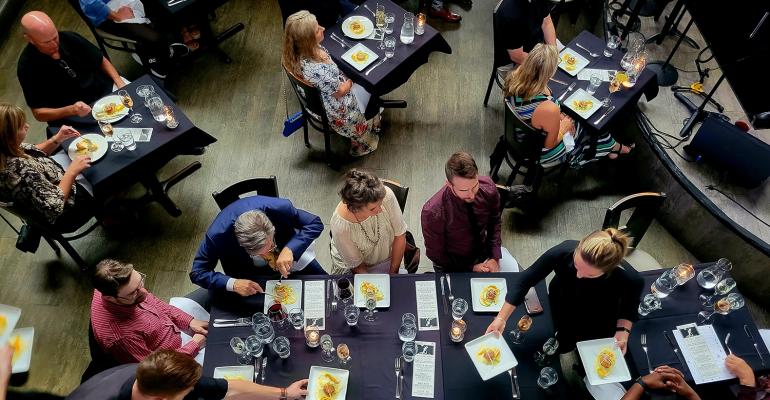 For these one-off tasting menus, Beckner and Nocturne's co-owner, Scott Mattson, pick a musical artist, an album, and an array of songs to compose an evening of not just live jazz, but food that truly speaks to the music.
Trends>New Restaurant Concepts

How to pair food with music

Some would say the art of cooking mirrors a musical composition. Both ebb and flow, and both can get chaotic and then fall into a healthy rhythm while balancing notes, be that in flavor or sound. For chef Dustin Beckner of Nocturne Jazz & Supper Club in Denver, the music and food get even closer during his special Renditions dinners.

For these one-off tasting menus, Beckner and Nocturne's co-owner, Scott Mattson, pick a musical artist, an album, and an array of songs to compose an evening of not just live jazz, but food that truly speaks to the music.

“We are really digging into the music, hearing the music, and I like looking at the history to see what [the musician's] life was like and if they were in a place famous for some sort of dish," Beckner said. "Basically, I take facts about the life, music, and sometimes the titles and it all gets worked into the menu."

It's not as simple as just pairing a note or instrument with an ingredient, said Beckner, though that certainly can inspire the direction a dish goes in. The process is more about how the music makes him and Mattson feel, and what foods that might evoke. 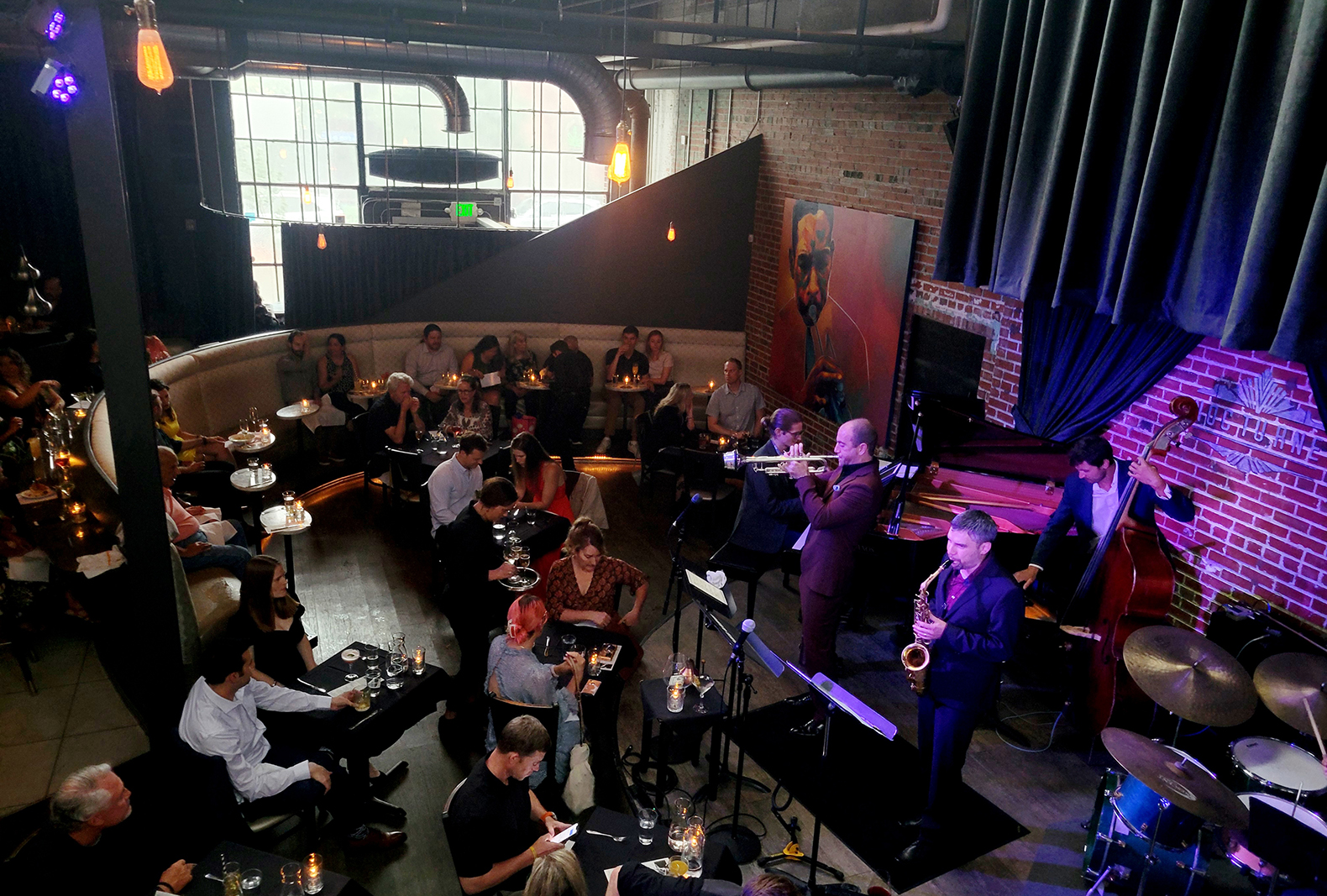 "Sometimes it's instrument-specific, or there's a certain density or aesthetic to the song that's the main crux for us," said Mattson, who not only runs the beverage program at Nocturne and his other Denver wine bar, Noble Riot, but is also an expert on jazz. "Usually it's the emotion being invoked that we try to latch on to, especially because the music is being played by a real band."

The 26th Renditions menu, the first since 2020 after the pandemic slowed things down, garnered inspiration from the jazz saxophonist Julian Edwin "Cannonball" Adderley. Each of the five courses got paired with a particular song from his repertoire, carefully curated by Mattson. The first course of that particular Renditions, served August 7, 2022, was called Left Coast Groove, and consisted of crab-filled avocado, sausage-filled tomato, and a mini chile relleno.

"The song was recorded live in Hermosa Beach in 1960, right there on the California coast, and the opening track is this cool, groovy tune with a West Coast vibe," said Mattson. "That's what kicked that inspiration off and chef hopped on it and crushed it." 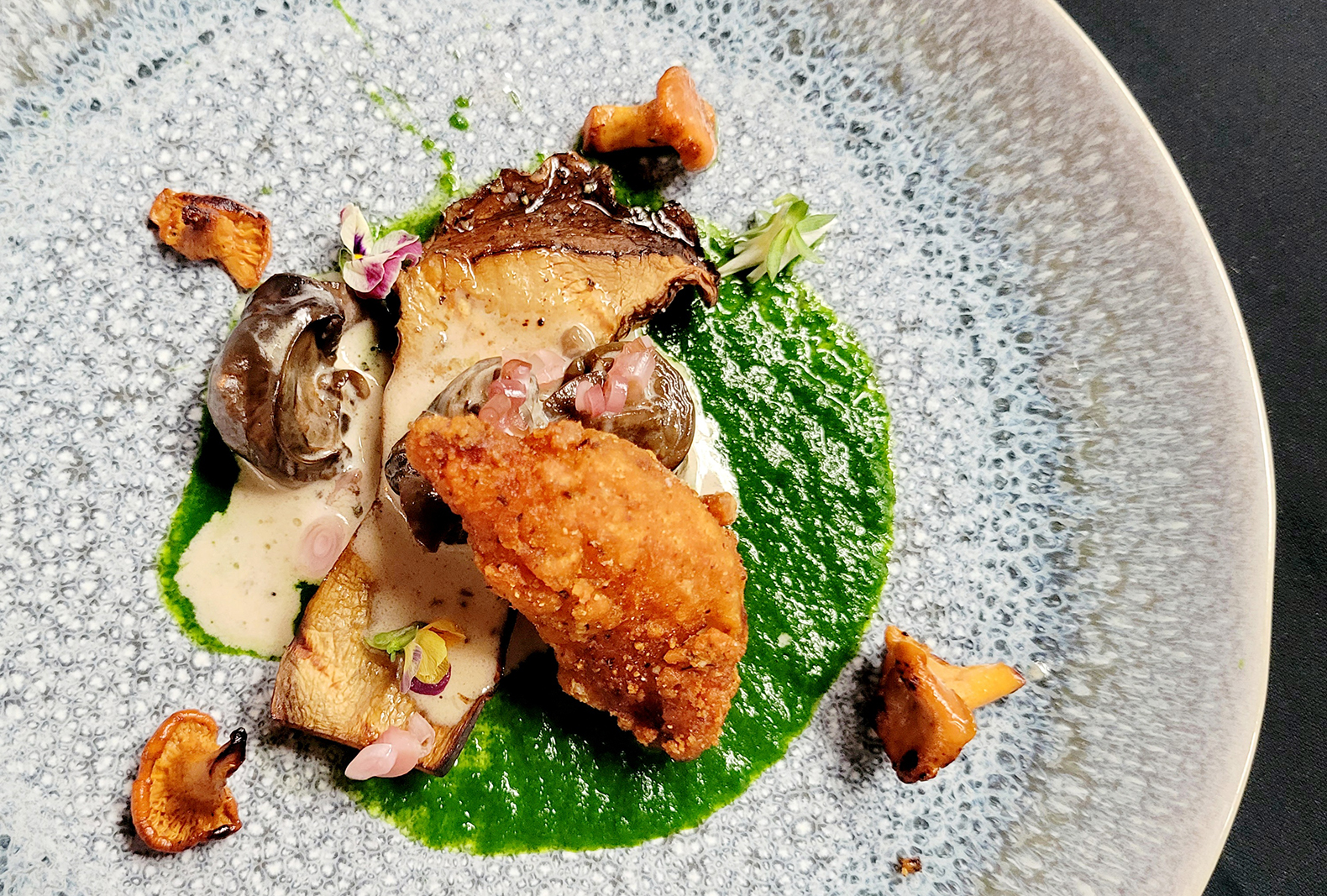 The idea, added Beckner, was to base that first course around a 1960s cocktail party — something that you might see in a Betty Crocker cookbook. Then he wanted to add seasonal ingredients, which are always featured on the Nocturne menu.

While the starter evoked a time and place in tandem with the music, the next course focused more on emotion and the feeling the chef had when listening to the track. The song that inspired it featured a lot of up tempos, and while busy, he felt the way the band played together mirrored the dance-like quality of cooking with others in a kitchen. The dish, Dubbed Cookin' & Swingin', showcased scallop, squash carpaccio, and Colorado buttermilk corn pudding. 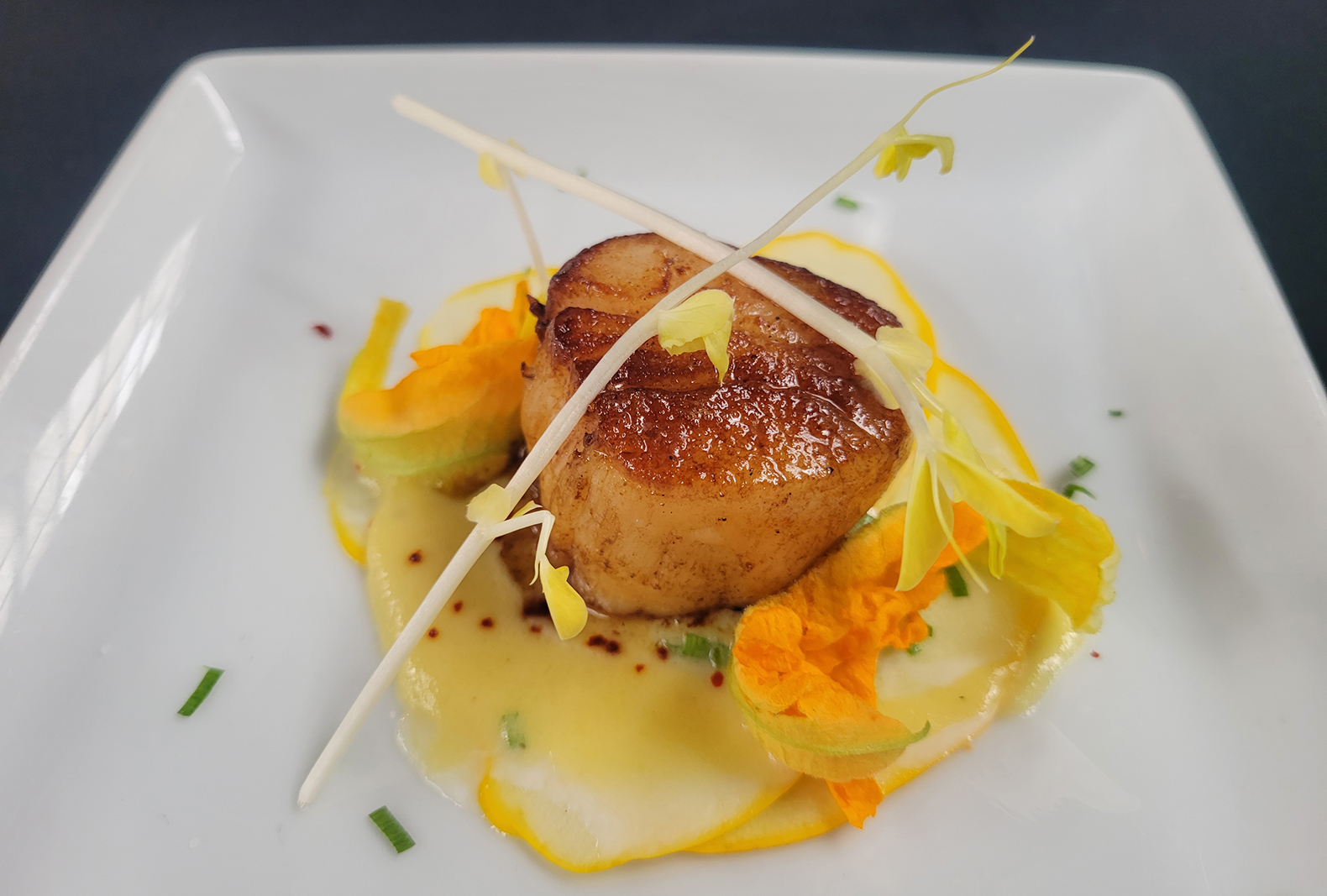 Some dishes get more of a literal translation of the music — for example the dessert, A Sleepin' Bee, which was named after the song by that name and featured honey and fennel pollen whipped into a baklava. The “foraged” course paired mushrooms with the sad tune "The Old Country," a song that speaks of feeling lost and overlooked, much how those tasty fungi are often hidden in the forest and unnoticed by passersby.

"The music is the inspiration, but we still have to make a successful meal that pleases people at the same time," Beckner said.

To create a menu like this, the chef sits down and listens to the album four or five times. He might do other things during some of these sessions, but, he said, the best way to really focus on what foods the music evokes is to not do anything and just take in the jazz. 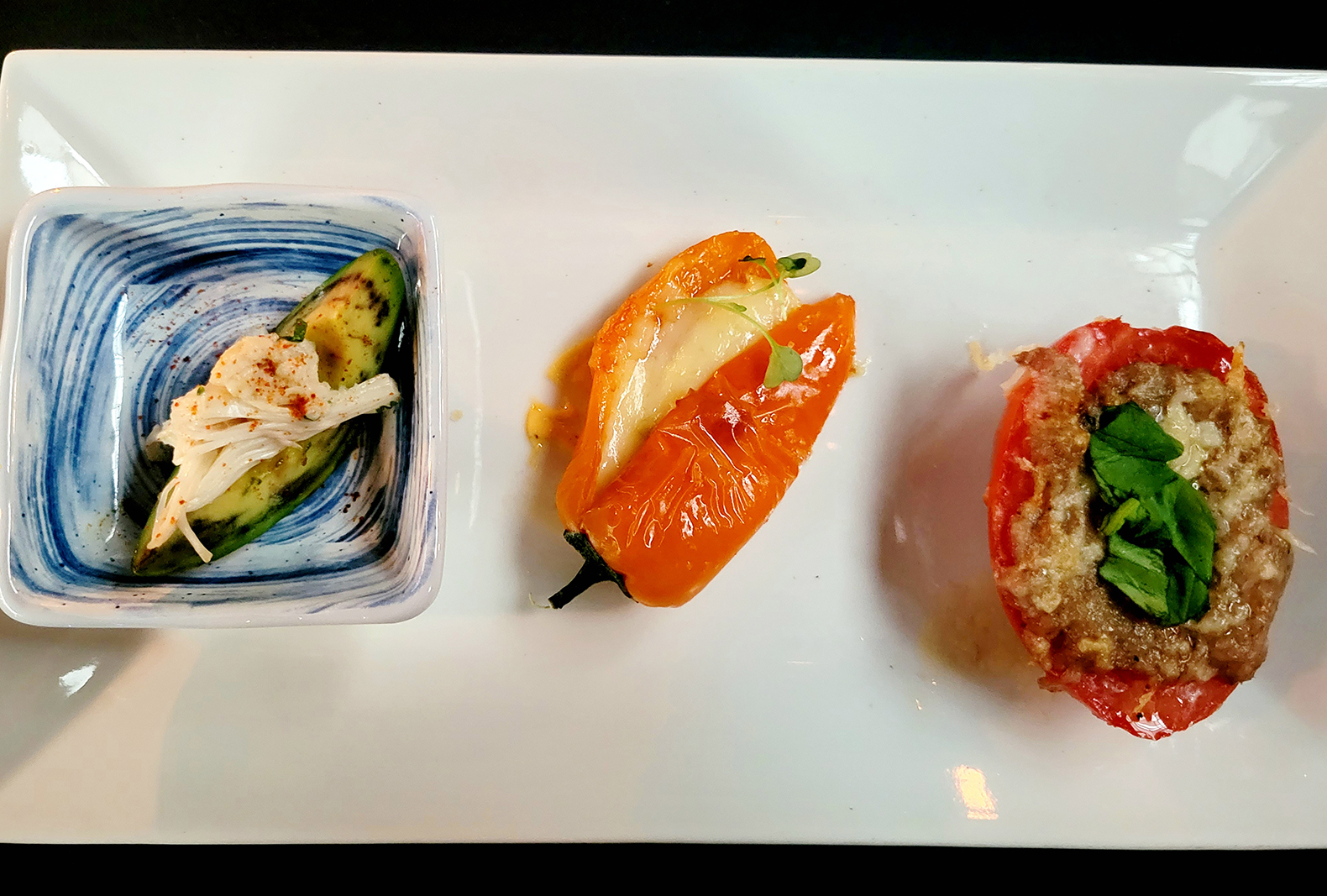 So how many hours does the team work to create one night of food and music? Well, they said, probably between 20 and 40. Each five-course dinner and show runs $115 per person, with the option to have beverage pairings for $55. While most nights Nocturne does two seatings, during the Renditions there's just one.

"It's not the most sustainable part of our business model, but at the end of the day we are both artists and it fires up our staff and our guests," said Mattson. "It's all about the creative outlet."

In the end, the chef and the musician hope to create a memorable and beloved experience for the consumer. Whether the food really pairs with a song is subjective, but it's certainly a fresh way to give the diner an unparalleled meal. For the next one in November, the pair are working with music performed by jazz singer Carmen McRae. The menu may not be set yet, but Beckner already has McRae's tunes in his head.