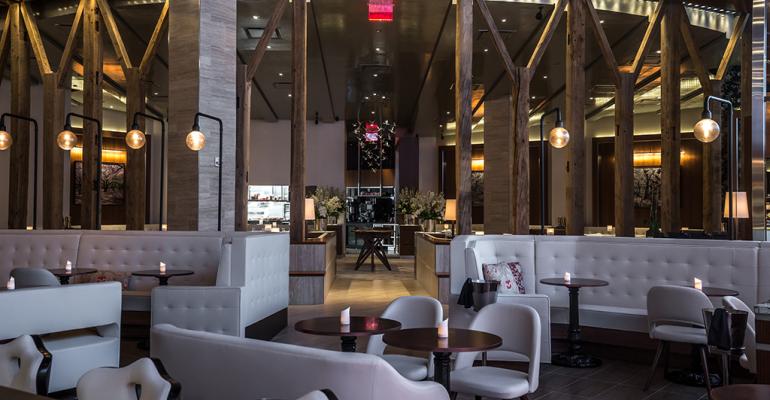 If a chef-restaurateur is lucky enough—and has the financial backing—to open a restaurant on one of Manhattan’s highest-profile blocks—and, if that street-level dream space happens to boast soaring ceilings and span 14,000 square feet (huge by NYC standards), he’d better be smart enough to hire an elite designer to create his public spaces.

Gabriel Kreuther is that smart. The former executive chef of Danny Meyer’s famed Museum of Modern Art restaurant, The Modern, tapped Glen Coben of Glen & Co. Architecture to create the environment for his first restaurant, an upscale, 350-seat Alsatian concept.

The eponymous restaurant is located at Sixth Avenue and 42nd Street, overlooking Bryant Park and the New York Public Library—“essentially the 50-yard line of Manhattan real estate,” Coben tells Restaurant Hospitality. The architect/designer’s prep work included going to lots of restaurants with Kreuther, where the designer sought to “understand where Gabriel came from, what his journey was and his philosophy of artfully composed dishes that respect the inherent qualities of each ingredient,” says Coben. The goal of the space? “To accomplish a timeless restaurant that would allow Gabriel’s menu to be highlighted not overshadowed.”

They used a tool any restaurant owner can use when conceiving a new concept or restaurant design: Pinterest. “We started a private board that allowed us to have a 24-hour conversation using images,” says Coben, whose team, as well as Kreuther and Kreuther’s partners, could add images that inspired them. “Those boards, along with an evolving narrative centered around Alsace and its different symbols, began to create the story that resulted in the restaurant.”

Ready for the tour? Glen Coben shows us around.