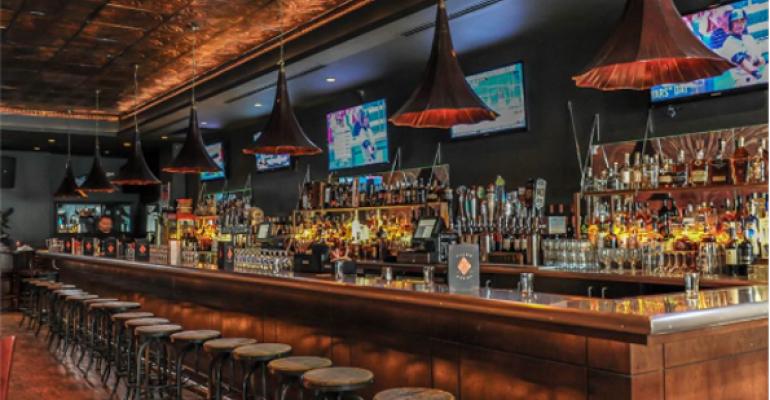 Villain & Saint is a lot like any other music venue that hosts rock and roll acts—except for its food. Washington star chef Robert Wiedmaier’s oversees the kitchen, and dining is such a key component that he’s parked a fully operational food trailer right next to the club’s entrance. Dubbed “The Express,” it gives music fans a place to eat lunch or grab a quick snack later in the day before the bands start playing.

Wiedmaier’s cooking talents first went on display at his haute French flagship Marcel’s in 1999. Since then, he’s produced great food at a string of highly rated restaurants including Brasserie Beck and white tablecloth standout Brabo, plus three units of the less-formal Mussel Bar and Grille.

But Villain & Saint (V&S), the third operation this DC-based chef’s RW Restaurant Group, recently opened in nearby Bethesda, MD, and is much, much less formal than any of his previous concepts. Wiedmaier describes it as “a Haight-Ashbury-inspired rock ‘n roll music hall” where nightly concerts are a big draw:

It may be the only restaurant where patrons will book a reservation on OpenTable and also pay a $5 cover charge once the band starts playing at 9 p.m.

Wiedmaier says he tried live rock music before at one of his Mussel Bar locations, but the noise level was a bit much for many patrons. That shouldn’t be a problem at V&S; customers come there for the tunes. But the food is a star attraction, too. “Most music venues that you go to, it’s hard to get a drink, the food’s mediocre," says Wiedmaier. "We didn’t want to do that here."

The Villain & Saint menu is divided into three categories.

A “Hand and Bar Food” grouping offers Farmhouse Deviled Eggs ($8), Pimento Cheese with Bacon Jam and Grilled Bread ($8), a Pulled Pork Burrito ($9), Cast Iron Calamari ($12) and Clams with Sherry Vinegar $10). The cocktail lineup (most under $10) and the well-curated beer and wine lists are reasonably priced, too.

V&S opened in April and The Express made its debut in late summer. The majority of items on the menu duplicate what’s being served inside—deviled eggs, a cheeseburger, five-bean chili, St Louis ribs and the burrito. Food trailer-only additions include the BBQ pork shoulder sandwich ($9), a Smoked Chicken Caesar ($12) and the seasonal soup of the day ($4.5). Some items are less expensive out front than inside the actual restaurant.

The Express is open from 11 a.m. to 8 p.m. Its patrons can eat their meal on Villain & Saint’s shaded patio, located at the rear of the restaurant. The music venue opens at 3 p.m. and runs until 2 a.m on the weekends.

The trailer can be hauled to catering or party gigs and provides Villain & Saint plenty of street-level visibility while parked. It’s better than a billboard in its way—an effective marketing strategy even in the age of social media.