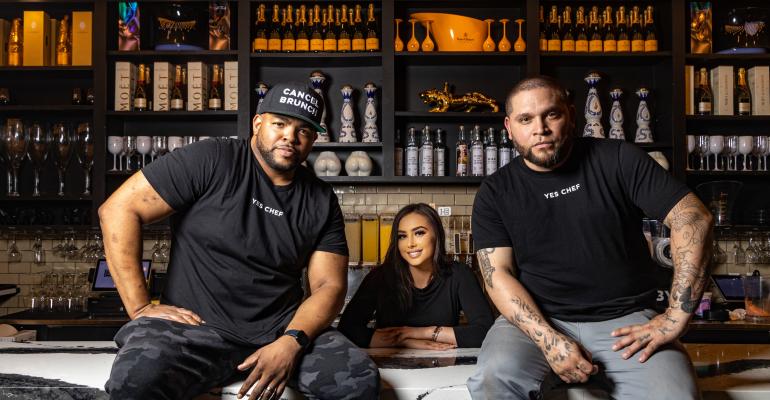 Gjinovefa “Gina” Luari, the Connecticut-based CEO of the brunch chain The Place 2 Be, has formed The Statement Group as she prepares the company for growth.

The Place 2 Be, known for its Instagram-friendly dishes and decor, currently has two locations in Hartford, Conn., and one in West Hartford. Two more locations are set to open later this year in New Haven and Springfield, Mass., respectively.

The 6,000-square-foot, 250-seat Springfield location, which will be housed in the Naismith Memorial Basketball Hall of Fame, will open when it receives its liquor license — likely within the next couple weeks. The 4,000-square-foot, 250-seat New Haven location will be ready to open by early summer, though Luari is considering waiting until near the beginning of Yale University’s fall semester.

The Statement Group also plans to debut three new concepts in Hartford by early 2023. Those include RAW, a casual, Millennial-friendly raw bar; as well as a pizzeria called Charred; and Cantina, a pan-Latin American restaurant with a tequila and margarita focus.

According to Luari, the new brands will aim to appeal to the same demographic that The Place 2 Be largely draws.

“[RAW, Charred and Cantina] all carry that audaciousness that we're known for, the playful marketing and of course the Instagram-worthy food,” Luari said.

RAW is scheduled to open in June. The 3,000-square-foot, 80-seat restaurant aims to replace the serious atmosphere Luari has perceived in other raw bars with an edgier, neon-lit, club-like atmosphere, while maintaining elevated flavors. Food and cocktails will be presented in a manner Luari describes as “experience-based and fun.”

Based on the current construction schedule, Luari plans to open Cantina near the end of this year. The 8,000-square-foot, 180-seat space will resemble a saloon, with an “Adam-and-Eve theme.” The menu will pull from various Latin American cuisines, while drink selections will mainly consist of tequila and a wall of frozen margarita flavors.

Charred, which will be located in an old fire station headquarters that is being converted into a residential building, is expected to open some time around the end of 2022 or the beginning of 2023. The 4,000-square-foot, 200-seat space will be themed after the fire house and will include a large patio — the erstwhile fire truck parking area. Luari said the group will bring in an acclaimed pizza chef for the restaurant but is not ready to announce who that will be.

Two notable chefs at The Place 2 Be, Xavier Santiago and Maurice “Mo” Major, will take on administrative roles in The Statement Group.

Santiago will serve as the culinary director and Major as the assistant culinary director. Both chefs have been champions on Food Network’s “Chopped” and, per Luari, fit in with The Statement Group’s ethos of pushing the aesthetic envelope.

“[Major and Santiago] fill what the other voids. So they work incredibly together,” Luari said. “When they come up with new dishes, concepts on the food, how to train the teams, they just balance each other out so well. So we just thought it was such a natural fit for those two to partner up.”

The Place 2 Be is noted for its Instagram- and TikTok-driven marketing, which leans heavily into meme humor.

“Our marketing philosophy is really just to give us a personality that is fun and playful,” Luari said. “And really, we connect with everybody across the board, but our social media managers and I talk on that page like we're talking with one of our friends. And it really connects and lands with people because it's very authentic.”

The social media emphasis is built into the design. Each location, for instance, has a bathtub filled with ball pit balls that guests can pose in — a play on the Drink My Bathwater cocktail, which is served in a bathtub-shaped vessel.

Luari formed The Statement Group with the goal of establishing The Place 2 Be as a national brand, while at the same time rolling out new concepts within the Hartford area. She is currently considering opening The Place 2 Be locations in Miami; Nashville, Tenn.; Dallas; and Houston.

“Having that structure allows for us to grow Place 2 Be and make sure that we're not losing all the hard work that we're doing inside Place 2 Be, and our standards are being met. Our reporting is better that way. And at the same time, we can still explore these other brands like Cantina, Charred and RAW,” Luari said.

Luari highlighted the staff training program at The Place 2 Be as a particular strength, noting in particular the attention to detail with which staff must plate dishes and arrange drinks in order to make them Instagrammable. Standardizing that training program under The Statement Group, Luari claims, would go a long way toward ensuring consistency and scalability.

“We are tight. Even now we are operating as a national brand, and we're not even a national brand,” Luari said. “In terms of the material that we have for our team, if you look at how we train, how we're breaking it down into, like, the ounce that you have to put into the recipe, it's the most scalable thing. And we're only at right now three [locations], soon to be five. So [The Place 2 Be] is the brand that we can open 10 and it wouldn't affect anything because we have all of this collateral in how we open a restaurant, how we train our teams and how we keep consistencies from place to place.”

Luari is also in the process of developing new restaurant concepts with Santiago and Major. She highlighted a plan for an elevated Puerto Rican restaurant inspired by Santiago’s cultural background.

The Place 2 Be currently employs 150 staff members. When all the upcoming restaurants under The Statement Group are open, Luari projects that the restaurant group will employ 300.

According to Luari, staff at The Place 2 Be average $55,000 per year in income. She credits this relatively high number to the tip-sharing program she implemented in 2020 when she switched to Toast’s point-of-sale system, through which customers order on their phones rather than from a particular server.

All staff — both front- and back-of-house — start at minimum wage plus their equal share of the tip pool. Luari claims that this compensation system encourages teamwork, rather than competition, among staff members.

“When my dishwasher was backed up — because dishwashers were like gold during the pandemic, and you never had enough — our team literally jumped in, was helping them wash dishes. I have never, in the five years before that, had that happen. It was just mind blowing to me. And again, no one cared. They just wanted to make sure everything was done. The customers were taken care of and the business was running because at the end of the day, it wasn't this Hunger Games for tips. People were there just to work,” Luari said. “It's just my philosophy: if your team is depending on your customers to pay them, then they're not working for you anymore. They're working for the customer, meaning they're working as independent agents within this space. They're not working together.”

Toast’s order-and-pay system also provided valuable customer analytics to Luari. Noticing a preponderance of area codes from Springfield, Mass., and New Haven, Conn., in the order data, she determined where to open the next two locations of The Place 2 Be.

“Those analytics that I get from the order and pay system, I would never have had with traditional dining. And it has made us such a more in-tune brand with our customers and where they come from and who they are,” Luari said.

The Statement Group’s new concepts — RAW, Charred and Cantina — will all benefit from $150,000 grants from Hartford’s Hart Lift program. Under this program, funded by the American Rescue Plan Act, the city of Hartford will match, dollar for dollar, contributions made by both Luari and the landlord of each location toward tenant improvements of the space, up to $150,000.

CORRECTION: An earlier version of this story had an incorrect spelling of Gjinovefa Luari's name.