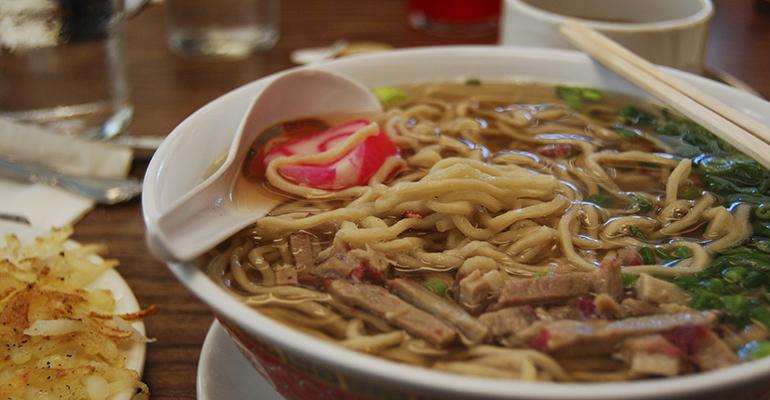 Emily Leung
Saimin, pronounced like the name Simon, or sigh-man, traditionally gets made with long and curly wheat-egg noodles and a dashi broth that's often cooked with kombu and dried shrimp.
Trends>New Restaurant Concepts

Forget ramen and pho: In Hawaii saimin is king

The noodles soup is enjoying a resurgence on the islands

Go to any Hawaiian island and chances are you'll see the simple noodle soup called saimin on a menu or two. The dish is ubiquitous with island culture, blending the state’s Asian influences with native flavors as well as ingredients brought by colonization.

Saimin, pronounced like the name Simon, or sigh-man, traditionally gets made with long and curly wheat-egg noodles and a dashi broth that's often cooked with kombu and dried shrimp. Each mom-and-pop shop has its own recipe for the dashi, though there are plenty instant saimin and fast food saimin options too. Saimin has a similar place in Hawaiian culture as ramen does in Japan, although it tends to be less complex.

"What makes saimin is its sparseness of ingredients. Even the egg: There is no soft-cooked egg; it's scrambled into crepes that are julienned," said Mark Noguchi, co-founder and executive chef of The Pili Group, a catering and events company in Honolulu. "It doesn't have a ton of body, but a lot of umami and it helps warm us on a rainy day." 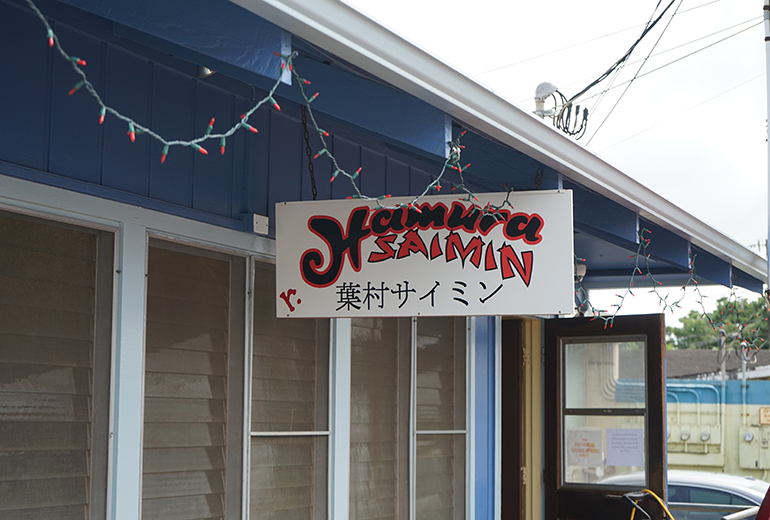 Noguchi said there may also be a scattering of green onions, a handful of mustard greens, and Spam, that tinned spiced meat popular on the islands that appears about as frequently in saimin bowls as kamaboko fish cakes or char siu pork belly do.

While saimin looks a lot like ramen, there are distinct differences. For example, the noodles are made with egg. The saimin broth is lighter, and the noodles tend to be a little less curly and more tender. The toppings also differ, mainly in how few grace a bowl of saimin.

The simple dish dates back to Hawaii’s plantation era in the late 1800s. The workers at that time were a melting pot of mainly Asian cultures, including Chinese, Japanese and Filipino. Each group had its own noodles that eventually coalesced into saimin.

Saimin remains a distinctly Hawaiian dish. Each island features specialty restaurants dedicated to the soup, much like ramen shops across Asia and the United States. Many of the restaurants are no-frills family-run places. Guests come in and order their soup at a counter, or at a handful of small, simple tables. It's often served to go, and lines can get long during lunchtime at popular spots. 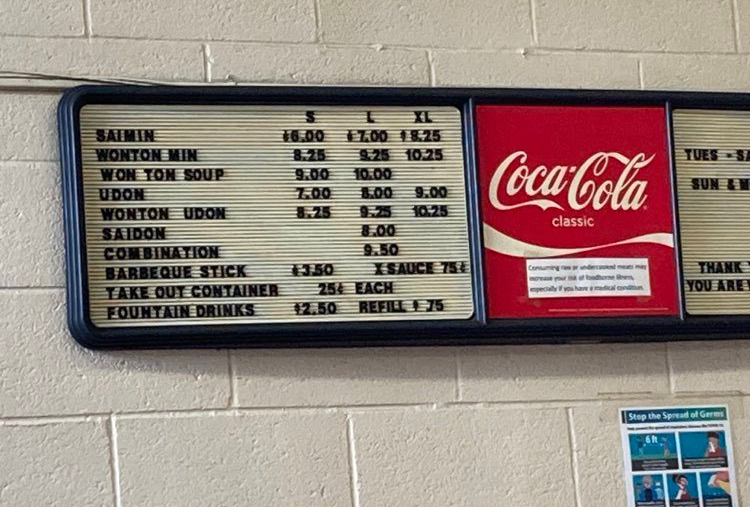 "It's iconic enough that McDonald’s had it, and this happened back in the 1950s [before special, regional menu items were common at the chain]," said Noguchi. In fact, he added, it was the owner of the Hawaiian franchise that convinced McDonalds to add it to the menu.

Though it's off the McDonald’s menu now due in part to the closing of Okahara Saimin, which was the local supplier of the soup, saimin can still be found at local chain restaurants, including Zippy's, where it's just $4.70, at local 7-Eleven convenience stores and in many grocery stores.

Aside from the fast food options, the main source of saimin is mom-and-pop shops all over the state, who charge roughly $8 a bowl. Popular spots include Tanaka Saimin in Honolulu where bowls start at $9.25; Palace Saimin in a small industrial area of Honolulu where a small bowl of saimin is $6 and an extra large runs $8.25; and Sam Soto's on Maui, which sells saimin in three sizes ranging from $8.25 to $10.45. At Nori’s Saimin and Snacks in Hilo the bowls start at $7, and it's been on the menu since the early 1980s.

Then there's Hamura Saimin on Kauai, which has a cult following, often with lines out the door. The small family-run show was recognized by the James Beard Foundation as an “America’s Classics” eatery in 2006. Their bowls range from  $7.50 to $9.

Saimin is enjoying a resurgence these days, according to Noguchi, who was raised on the islands and has been in the Hawaiian restaurant business in some form or another for decades.

"I think that saimin is starting to make a comeback," he said. "It's such a simple and quiet food, it started to disappear as mom-and-pop shops closed."

Unlike ramen, rarely is saimin created to be an upscale food. It's not hip and the cafés selling it aren't trying to get on any food shows. Former Top Chef contestant Sheldon Simeon does have a recipe for it in his cookbook, Cook Real Hawai‘i,but otherwise the dish remains fairly low-key. The classic saimin noodles are made locally by Sun Noodle, though many are still made by hand, especially on Kauai.

While simple, Saimin is a handmade specialty of Hawaii, and remains beloved by locals and easily accessed by tourists to the area. That's not to say it can't come to the mainland as poké has, but so far it's still under the radar outside of the islands.