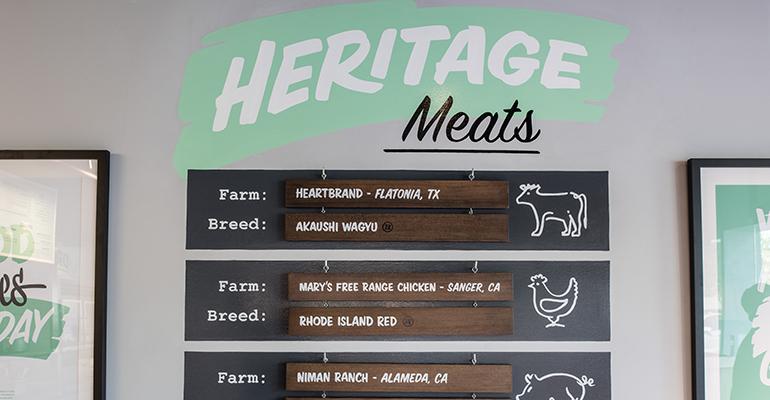 The operators of an eclectic “fast fine” concept called Heritage Eats out of California’s Napa Valley are looking to expand in the San Francisco Bay area.

Heritage Eats debuted last May offering a fusion mix of salads, sandwiches and rice bowls with a diverse mix of global flavors, from a Jamaican bao made with buns steamed in house, to a chicken tikka masala wrap.

The concept was developed by two expatriots from the fine-dining world who met while working for AvroKo Hospitality Group, the New York-based multiconcept operator behind Manhattan restaurants such as Public, Saxon + Parole and Genuine.

Heritage Eats founder Benedict Koenig IV said he was working in New York for Goldman Sachs, but realized the finance world was not a good fit. On the weekends, he began working as a server for some of AvroKo’s restaurants there, and in 2012 he moved to the San Francisco Bay area to work for the hospitality company’s full-service concept there called The Thomas, though it has since been renamed Ninebark.

After about a year at The Thomas, Koenig took off on a backpacking trip through the Middle East and Asia for about six months. When he got back to Napa Valley, the idea for what became Heritage Eats had crystalized and he and Kupper began looking for a location.

“A lot of the idea was born through my travels overseas, where in a short time I was exposed to a variety of different cultures and people and cuisines,” says Koenig. “We saw food as a great connector all around the world. It was the same, but different. It’s used to bring people together.”

At Heritage Eats, guests can choose from signature dishes or build their own, walking the line in the style of a Chipotle Mexican Grill. For the build-your-own options, there is the choice of multiple proteins and various bases, like pita, bao, salad or rice; along with toppings that might include Asian pickled veggies or roasted corn and edamame; all of which might be topped with sauces such as lemon tahini, spicy salsa roja or barbecue.

The meats are described as “heritage” products, including Akaushi Wagyu from Heartbrand farm in Flatonia, TX, Mary’s free-range chicken from Sanger, CA, and Berkshire port from Niman Ranch in Alameda, CA.

Entrée prices range from a falafel pita with house-made harissa at $8.75 to a Cowboy Steak wrap for $11.25 with sides like waffle fries, or various types of hummus. Beverages include horchata and various iced coffees or teas, as well as beer and wine.

The average check is about $13.50 to $14.50, Koenig says. The concept also does brisk business in catering, which he expects will account for about 15 percent of sales in the first year.

Heritage Eats is on track to see between $1.7 million to $1.8 million in sales in its first 12 months in a restaurant that is about 2,500 square feet, with a 500-square-foot patio.

Koenig hopes to open a second location of Heritage Eats in the Bay area before the end of 2016. The goal is to focus on second-tier markets, or smaller communities, like Napa Valley, rather than moving into urban neighborhoods already crowded with premium fast-casual options.

“We’re actively looking to expand,” Koenig explains, though he adds they have no plans to franchise.

“Over time, I’d love to have a lot of them up and down the coast, and, God willing, if the market and product are there, spread out to the East Coast and everywhere in between,” he says.