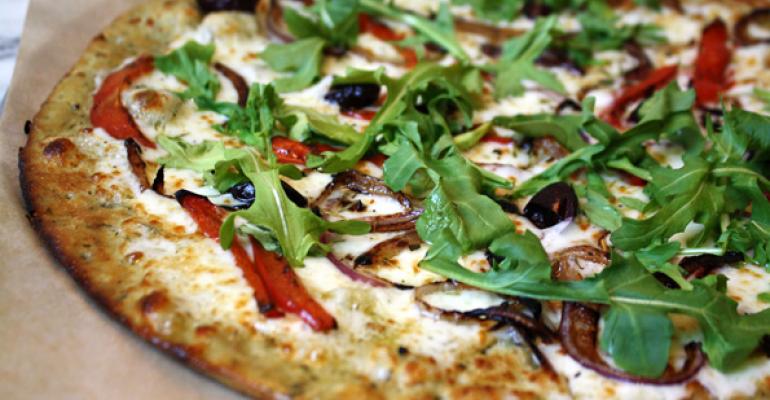 The Story: Samit Varma, a former Navy man, venture capitalist and pizza lover, came up with the idea, but Ron Biskin brought the restaurant and franchising expertise. And $3 million in funding from Varma’s former venture capital firm and another got the idea off the ground.

The model is similar to the others, but with an art-centric approach. Work from local artists is on display throughout the stores, and on sale commission free, providing a connection and service to the local community.

“Creating a pizza is an act of creativity, and we want to inspire that,” says Varma, who has fond childhood memories of pizza-making fun with the family. After spending years on a submarine and then becoming a partner at Anthem Venture, Varma came up with the concept and found a partner with the right experience.

“I’ve been involved in several well-known and rapid-growth concepts,” says Biskin, a veteran who’s worked in the corporate offices and as a franchisee of brands like T.G.I. Friday’s, Burger King, Chili’s and Baja Fresh. He’s served as president of Wolfgang Puck Express Licensing and most recently in the same position with Native Foods, a vegan restaurant concept. “Even with all that, I’ve never been as excited as I am with Pizza Studio.”

Biskin has helped refine Varma’s concept, to make it scalable—from construction to design to operations—but not at the expense of quality, he says.

Basic Price: The 11-inch “Create Your Masterpiece” pizza is $7.99 and includes unlimited toppings, while “Starving Artist” specials are 5.99.

Growth Plan: Varma and Biskin say they’ll grow primarily through franchising, but they’ll do it by seeding joint-venture partners with significant capital contributions. Thirty-seven units are being developed nationwide, including 12 in the Northeast by Lloyd Sugarman, the largest franchisee of Johnny Rockets.